When a hunter puts delicacies such as frozen caribou heads on his table at the Iqaluit, Nunavut, open air market, they are snapped up in moments by eager buyers. Pieces of seal meat, sea birds, and seaweed—foods from the country—sell out quickly. According to a news report last week, such foods are in high demand by Inuit who live in towns such as Iqaluit. 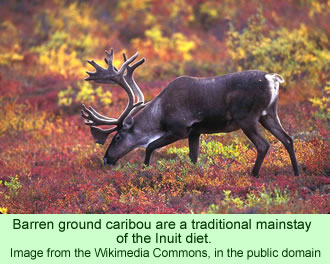 But the Inuit debate whether the sale of “country” foods, mostly wild, hunted animals such as caribou, is appropriate. Consumption by the hunter is normally unquestioned, but is the sale of the meat desirable, and is it really ethical?

Facebook groups have formed to foster the trading, buying, and selling of these kinds of foods, from musk ox to fish eggs, as well as caribou, and they have many members. The wild foods are not sold cheaply: a whole caribou can go for $300 without the hide, and even Arctic char goes for $20 per fish.

Hunters and their supporters argue that fuel for their snowmobiles and bullets for their rifles cost a lot of money. The income they can earn will help keep alive their hunting tradition. Wild game meat keeps Inuit who are confined to offices in places such as Iqaluit in touch with their roots. And it also helps prevent people from going hungry in northern communities where groceries flown in by plane can be quite expensive.

Opponents argue that the meat is largely un-inspected, and, further, that the hunters may harvest too many of the potentially valuable game animals. Others maintain that selling the meat betrays Inuit sharing traditions. For sharing has been one of the vital strategies in the traditional Inuit culture for retaining peacefulness and harmony in their communities.

James Eetoolook, from the Inuit group Nunavut Tunngavik, said, “people that are still thinking in the old tradition say that it’s not the Inuit way of life to sell to others. You have to share what you have.”

The literature supports his concerns, for the traditional practices of sharing food among the Inuit have been described by several anthropologists.  Perhaps the most detailed was provided by Damas (1972). Among some of the Inuit people, he writes, rules for sharing practices were quite involved, but more general forms of voluntary sharing of meat also were common.

One practice involved people taking portions of seal meat to other households in the village, to people who were not included in the primary networks of hunting companions. During the fishing and caribou-hunting seasons, this type of generosity was quite common, Damas writes.

Some communities practiced a form of sharing the author referred to as communal eating, where people hosted meals for others, but without having any established patterns to the practice. In one community, sharing took place throughout the year, though not so much when food was plentiful as when it was not. Damas felt that much of the food consumed in the community was shared. In many communities, sharing was based partly on kinship and partly on common residence in the same settlement.

Condon (1990), however, provided a more recent description of the Inuit relationship to sharing after the people left the land and settled into permanent communities. By establishing permanent residences, they may have gained the security of government assistance and wage employment, but they lost the traditions fostered by interdependence: cooperation and sharing. As a result, those values are no longer imparted to the younger generations, and young people have become isolated from the influences of their families. This has led to alienation, alcohol abuse, and other social ills.

According to last week’s news story, a recent study by the Royal Society of Canada evidently sees both positions, sharing and selling, as viable. Sharing the harvest from a hunt is still common among the Inuit, the study indicates, but the terms of their land claims also suggest that hunters are fully justified in selling their meat. That is one way for increasing the food supply among the people.

Nearly three-quarters of Inuit homes do not have a sure, steady supply of food, according to one study. Half of young Inuit between ages 11 and 15 go to bed hungry at least part of the time. Another study showed that two-thirds of Inuit parents admitted they sometimes had no food and no money to buy it.

A co-author of the Royal Society study, Harriet Kuhlein, said, “if people can’t get their traditional country food with their own family, then they have to get it somewhere.” She added, “To commoditize it will help some people get it. It’s one part of the picture.”

There are numerous reasons that the game meat is so popular in Iqaluit, according to Will Hyndman, the organizer of the outdoor market there. People move into towns and are unfamiliar with appropriate locations for hunting in the vicinity, or they lack access to hunting equipment. Furthermore, town dwellers are cut off from their traditional circles of sharing.

Mr. Eetoolook pointed out that staple foods such as caribou may be hard to obtain because the animal herds are scattered across the landscape and unavailable locally. Selling the game meat simply allows people living where animals are not plentiful to be able to obtain food. And of course, market hunting allows people to earn money. Eetoolook argued the obvious: “you need money to live these days.”

But there are still valid concerns about abusing the caribou herds by over-hunting. Drikus Gissing from the Environment Department of Nunavut says the situation must be monitored. “We are concerned, especially with the large amounts of caribou being shipped from the mainland to the Baffin region,” he said. “But we cannot limit that trade unless we can prove there’s a conservation concern.”