Tense political borders in and around northern India have produced regional political stresses that have fostered strains in the traditional peaceful relations between Ladakhis of different religious beliefs. These strains have produced hostilities and divisions among families, friends, and communities throughout Ladakh, and particularly in Leh. 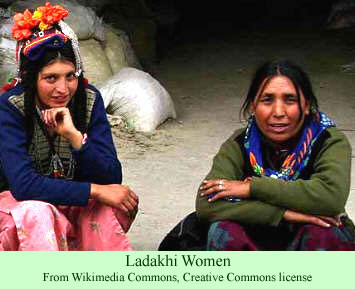 A fascinating scholarly article last year by Sara H. Smith analyzes, from the perspective of a geographer, the complex historical and geographical factors that have produced these newly divisive ways of defining religious identities in the Leh District, part of India’s Jammu and Kashmir State. Hardening religious divisions such as these threaten the traditional nonviolence of the people.

Smith, who has published earlier research on Buddhist and Muslim family relationships in Ladakh, begins her work with a discussion of the way the Line of Control, the cease fire line between Pakistan and India established in 1948, divided the peoples of the region. She writes carefully and thoroughly, though evocatively, throughout her article. “Conflict and uncertainty about the border has become a haunting presence that allows for a particular set of political narratives to take root, even when the border is out of sight,” she writes (p.50).

In sum, the macro-political situation, at the state and international levels, has been a prime factor in helping dissolve the traditional Ladakhi tolerance for differences. Smith captures the problem of growing intolerance by focusing on her own study area, Leh town, the capital of the Leh District and the center of the Buddhist community in Ladakh. She did periods of field research there in 2004, 2007-08, and 2010.

Historically—traditionally—Ladakhis have lived together quietly, intermarrying into families with different religious persuasions without much trouble. While the people of the Leh District are primarily Buddhists, the people of the Kargil District of Ladakh are primarily Shia Muslims. There are significant minority populations of Buddhists in Kargil and Muslims in Leh. Also, because of historic trade and missionary activities, people of other religious beliefs—such as Christians and Sunni Muslims—also live within the two districts.

Marriages between Buddhists and Muslims, especially in Leh, have always been acceptable. Smith found that 83 percent of the Buddhist and Muslim women she interviewed in 2008 had relatives from the other faith, and among 75 percent of those interviewees, the faith divide was at most only one generation back—parents, uncles, aunts. News reports as recently as 2012 have continued to emphasize the harmony, and stability, that has prevailed in Buddhist/Muslim marriages.

But such inter-community marriages are becoming part of the memories of Ladakhis, rather than aspects of their continuing realities. A street brawl between a Muslim and a Buddhist in the late 1980s led to some stone throwing, then gunfire, then police intervention. Since the police forces came from the Muslim-dominated state of Jammu and Kashmir, the Buddhists took strong offense when they imposed a curfew, invaded their homes, and beat up their people.

The Ladakh Buddhist Association called for a boycott of the Muslims, people with whom they had lived as family members, neighbors, and friends for centuries. The boycott from 1989 to 1992 was strictly enforced, and it has led to profound, continuing disruptions in what used to be normal Ladakhi life. The boycott ended when the leaders of both the Buddhist and Muslim communities in Leh agreed that inter-faith marriages should be ended.

Smith unravels the complexities of this continuing situation in Leh as it has affected the people’s perceptions of their community and their fellow inhabitants. For one thing, the monumental religious structures in Leh—the Buddhist temple, the Shia imambara, the Sunni mosque—have been significantly modified in the years since the street fighting and the hardening of the inter-religious divide.

The changes in the structures have been made to emphasize territoriality, the focus of each group on itself—“we Buddhists” or “we Muslims” are strong and in the right. This territoriality in Leh reflects the much larger claims on territory and political boundaries of Jammu and Kashmir, and larger than that, of India and Pakistan.

The author’s analysis of the ways the hardened divide affects the lives of the people of Leh forms the heart of the article. She quotes from her interview with Razia, a Sunni woman, who expresses nostalgia for Buddhists and Muslims who used to live, in Leh’s past, without these artificial borders between their communities, who used to live “like one person (p.53).” Older people told Smith many stories of the ways the Buddhists use to get along with Muslims, and vice versa.

She found that older Ladakhis were not the only ones uneasy about the marriage ban. The feelings of discomfort were shared by young people. Even though they accepted that inter-faith marriages were impossible at the present time, at least in Ladakh, it seemed reasonable to them for such couples to run away and have their affairs elsewhere. However, families often seek to forcefully end such relationships, even when the young couples have moved away.

But the campaigns by the Ladakhi Buddhist leaders have gone even farther than that. They realize that the birth rate in the Muslim community is greater than in their own, so they argue that the Buddhists will soon be submerged in a tide of Islam if they don’t strongly encourage their women to produce more babies. Buddhist leaders and their views have thus invaded the domain of individual family planning and contraception. While women in Leh still have official access in health centers to contraceptives, Buddhist women have to listen to pressures in the temples for them to have more babies.

Smith concludes her article by describing a workshop that she and three others organized for 25 young people in Leh. The participants, between ages10 and 20, were broken up into teams and sent out around the town to produce digital photographs and drawings that would best represent what they felt and hoped represented the past, present, and future of Ladakh.

A few of the teams took virtually the same picture, a scene of the Sunni mosque next to the Buddhist temple. The image conveyed, in the words of one team, the past and the hoped-for future of Ladakh, a future that they saw as requiring a peaceful relationship between Muslim and Buddhist Ladakhis.