Millions of Rural Thai children are being raised by their grandparents, a social situation that seems to be producing serious problems for the youngsters, such as increased levels of aggression toward their peers. The Bangkok Post last week published an analysis of the issue based on preliminary results from an academic study plus the paper’s own interviews with rural observers. 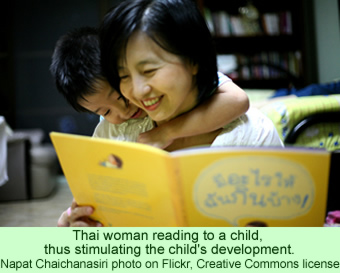 The research study expresses concern that many Rural Thai children are being brought up without the benefit of having their parents around. Parents leave their children with their own parents in the country and move to Thai cities to take jobs. This pattern, the investigators are finding, is causing serious problems for the broken families, both for the children and for the grandparents involved.

The four-year study conducted by researchers at Mahidol University, called “The Impact of Internal Migration on Early Childhood Well-being and Development: A Longitudinal and Mixed-Method Study,” has investigated 1,000 Rural Thai children affected by internal migration. About three million children in Thailand are not living with their parents as a result of their parents’ moves to cities, a rate that is more than four times higher than neighboring Laos.

The researchers are using screening techniques to analyze the developmental abilities of the children, such as their language, personal, motor, and social skills, compared to standards for other children their ages. So far, the study has found that such developmental abilities as using and controlling muscles, holding and grabbing things—or even just smiling—appear to be negatively impacted by the migration of parents.

Initial results of the study are showing that 25 percent of the children who live separated from their parents have developmental delays, compared with only 16 percent of children who live with both of their parents. The Bangkok Post article acknowledges that the study does not take into account other possible factors that could produce such delays, such as prenatal and birth issues, nutrition, or living conditions. A better picture should emerge by the time the study is completed in 2016.

The Post suggests the obvious, that the parents have migrated to cities to make more money than they could in the country, with the hope of sending it back to support their children. But the reality is that the funds they send back are never enough for much more than necessities.

Sumid Sopama, the acting head of the Early Childhood Centre in the village of Ban Nong Ao, which is in Nam Phong District of Khon Kaen Province, northeast Thailand, said “all [the grandparents] do is feed the children. But for toys or books that they may find in the market—all the good stuff that could help stimulate development for their grandchildren—there is not a lot of it.” He goes on to say that grandparents tend to be frugal; they will hesitate to buy stimulating things, saving their funds in case of serious needs.

He agreed with what was being turned up so far by the academic study. Sumid has noticed in his kindergarten facility that children who are not living with their own parents may display more aggressive tendencies in comparison to their classmates. They use more vulgar words and play more aggressively. They often have trouble forming friendships.

Sumid speculates that they may learn these behavioral problems in the homes where they are living. “The grandparents just want to get each day over and done with. Once they’ve done their part, they bring the kids here and rely on the childhood centre to take care of the rest,” he said. The Post reasons, in defense of grandparents, that they often do not have the time or energy to properly care for the young children. They must work hard just to put food on their tables.

Thongchai Pokum, the chief of Ban Nong Ao village, admitted to the Post that there are some drug problems among the young people in the community. But, he added, “it’s a good thing that, in our rural society, we can look out for each other. Everyone is not too far away. Even though the parents aren’t around, the family can still give them advice and guidance.”

He also expressed concern about teenage pregnancies in his community, which have the effect of prompting girls to quit their educations. Then, they take laboring jobs in the cities, which is all they are qualified to do, perpetuating the cycle of adults leaving children with their parents. The Post concludes its report by commenting that this is “a problem that is slowly, in the background, jeopardizing the nation.”