A well-known Malaysian sports figure recently spent a day at a Semai village to find out the needs of the people and to highlight a report on the major development issues facing the nation. 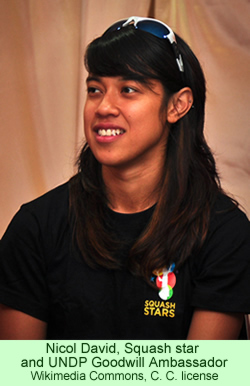 According to the Wikipedia, the sports star, Nicol David, is ranked as the world’s number one women’s squash player, and she is considered to be “one of the greatest women’s squash players of all time.” More to the point, she also serves as a Goodwill Ambassador for the United Nations Development Programme (UNDP).

The Star, a Malaysian news service, reported that Ms. David visited Ulu Tual, a Semai village in Pahang state, as part of the forthcoming release of the UNDP report “Redesigning an Inclusive Future,” which will analyze the development of Malaysia. It apparently will focus on issues concerning the minority communities in the nation.

Ms. David was evidently impressed by her reception: “The villagers have been so warm and welcoming,” she said. “They are so open and willing to learn. You can see that they’ve got so much potential and that if we were to just give them a little bit of support, they would then go the extra mile.”

The Semai villagers have been building a community learning center, assisted by the Centre for Orang Asli Concerns (COAC). The learning center, called “cenwey penaney” (shoots of ingenuity), intends to teach the Semai children traditional, useful skills such as making bird snares and basket weaving.

The head of the village, Yok Ek Chantan, indicates that while progress on the new center has not been rapid due to financial constraints, the community is enthusiastic about it since it will focus on continuing the traditions of the Semai. Yok Ek discussed with the reporter the issue of schooling for the children in the village. “We’ve tried sending some of the children off to boarding school but they don’t seem to fit in well with the rest of their classmates. We’ve also had some children who find it hard to ease back into the Orang Asli way of living after they’ve been away for some time.”

The Assistant Coordinator of COAC, Jenita Engi, has been working with the villagers in the development of its cenwey penaney center. She told The Star, “when it comes to the Orang Asli, every tribe has its own customs and cultures. I’ve seen many cases where city folks try to take the villagers out of their comfort zone to try and ‘rehabilitate’ them into one of them. That’s just wrong because we’re not listening to what it is that they really need.”

She adds that the Semai are quite capable of doing many practical things, such as building their own homes or finding sources of income. Outsiders need to assist them in furthering what they already can do effectively. They should support them in continuing their own ways of life as they wish.

The Star article indicates that the children of Ulu Tual have to walk 10 km (6 miles) to school every morning through rain forest conditions. During the rainy season, it is very difficult for many of the children even to make it to school. The news report adds, however, that formal education is often not a high priority for the Semai, since they would rather engage in activities that continue their traditional customs and lifestyles. The Semai children would prefer to “learn skills to enable them to find their living from the land,” The Star writes.

Scholarly researchers do not take such a simple view of the Semai interest in education. Dentan and Juli (2008), which is freely available online, point out that many Semai children face a variety of factors that inhibit them from attending school, such as a lack shoes, clothing, bags, stationery, books, and transportation. Nonetheless, the anthropologists contradict some of the points made in the news report by arguing that Semai families are often enthusiastic about their children getting educated. They will go into debt to afford an education for a child.

Dentan and Juli amplify these issues. While many of the Semai children, supported by their adults, appear to be eager to go to school so they might have more prosperity in their lives, the schools in or near their communities are run by outside authorities appointed by the state and they usually do not include much if any local involvement by the Semai people. The reason, according to an earlier research report (Endicott and Dentan 2004), is that Malaysia is more interested in converting the Semai to Islam than it is to providing the children with modern educational advantages within their own cultural contexts. Within that perspective, last week’s news report is hopeful.

A further issue is that the Semai frequently suffer in their schools from poor instruction, bullying by the majority children, and a lack of quality teachers and relevant materials. Furthermore, the teachers in the state-run schools often do not hesitate to use corporal punishment on the children, a practice which is part of the Malay culture but not that of the Semai. Maintaining the peacefulness of a society is not a concern of the Malaysian authorities (Dentan and Juli 2008).

In schools such as those endured by the Semai, the approaches and curricula transform the kids from “peaceable cheerful Semai children willing to make friends with other peoples who treat them well and eager to learn about the wider world into unhappy, aggressive, cliquish kids under so much stress that it is hard to do their homework, and with such low self-esteem that it becomes an enormous task for them to attempt accomplishing anything,” in the words of Dentan and Juli (2008: para. 66).

So while the news report last week sounds positive in some ways, the background provided by Dentan and Juli prompts the hope that Malaysia will go even farther in respecting the traditions of their peaceful, minority peoples.