Two scholars at the University of Laval wondered if money could buy happiness, a seemingly trivial question but one that can have serious implications for people such as the Inuit who live on the fringes of modern affluence. Their investigation, presented in a journal article last August, focused on the ethics of human happiness. What is the value of capital accumulation to people? Does material consumption make us happier? And, the essence of their research, what factors foster, for the Inuit at least, a sense of well-being? 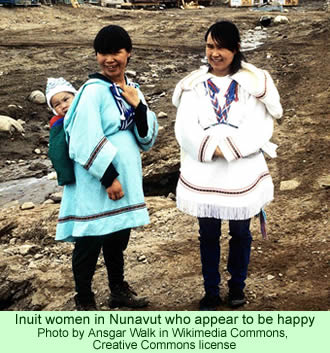 The article by Roberson Édouard and Gérard Duhaime opens by posing the questions that trouble them and that provide the impetus for their research. They developed their ideas in response to a fundamental question posed by Amartya Sen, the well-known Indian economist: what are the basic purposes of wealth? Sen answered that economics has both practical and ethical implications, and he deplored the fact that so many economists ignore the ethics of their field.

In essence, readers are asked, aren’t people more than just platforms for displaying the wealth they accumulate, or, the converse, creatures designed to lament their lack of prosperity? The authors effectively defined happiness as “a general perception of the meaning of life, a subjective synthetic assessment of the quality of life as a whole (p.375).” They wanted to find out how much economic issues contribute to Inuit feelings of happiness, and they based their investigation on the premise that the best, most accurate, measures of their sense of well-being are the feelings that the people themselves have expressed.

The scholars believe that well-being can be conceived of in terms of three different dimensions: having, loving, and being. Having is the concept of possessing material goods, as measured by wealth, housing conditions, income, employment, levels of achievement, and medical issues. Loving is a term that implies human relationships, belonging, and the associated feelings of connectedness. Being refers to individual senses of balance and personal worthiness. The authors hypothesized that the loving dimension would more effectively define Inuit senses of happiness than the having dimension.

They based their investigation on several large-scale population samples that included the Inuit: the Aboriginal Peoples Survey, supplemented by the Survey of Living conditions in the Arctic, and the Canadian censuses. They examined detailed data from a representative sample of 10,775 Inuit, and they particularly focused on 5,144 Inuit adults over 15 years of age.

Édouard and Duhaime present their results in several detailed tables, but it is worth summarizing a few of their points since they should be of interest to anyone trying to understand the ways the Inuit view themselves and their environment. A reader might have suspected some of their points before studying the article: for instance, that being unemployed has a serious impact on the feelings of satisfaction of the Inuit.

Perhaps also not surprising is the fact that Inuit with stronger ties to their families are the ones who are more satisfied with life. In fact, people with effective family ties are nearly twice as likely to feel happy as those without good connections with relatives. But, of much greater surprise, is their finding that while the support of extended family is important, participation in traditional activities seems to have little impact on Inuit feelings of satisfaction.

Surprisingly, the authors have to conclude from their complex analyses of their data that the “being” dimension predicts the feelings of happiness better than the having or loving dimensions. “In other words,” they write, “what the Inuit ‘ARE’ contributes more to their happiness than … what they ‘HAVE’ or what they ‘LOVE’ (p.389).” The flip side of that conclusion, however, is that while economic achievement may not lead to satisfaction with life for the Inuit, the lack thereof may be a significant predictor of a sense of despair.

Money is essential to the Inuit, the authors state. Might as well be clear. Financial wealth, even in remote Inuit communities, fosters many other essential aspects of life, such as housing, food, health, safety, traditional activities, memberships in local groups, and leisure activities. A lack of financial resources can certainly lead to unhappiness, but Inuit who have material goods are not necessarily satisfied with life.

The authors make another effective point. They argue that the very act of highlighting their social problems and the unfavorable daily living conditions that some of them endure itself can have an adverse effect on their sense of well-being. The government, media, and scholarly portrayals of the Inuit as a society that is in distress—people who are rife with suicides, violence, and alcoholism—may have the unintended effect of developing negative consequences. That is, the focus on problems may help repress Inuit feelings of happiness. Furthermore, the tendency to professionalize Inuit social issues—experts are needed to treat their problems—may hinder their capacity to take care of their own concerns.

The final paragraph in this outstanding article exemplifies the wisdom of the authors, and is worth quoting in part: “Family is an institution that is fundamental to the happiness of the Inuit. The strength of family ties and the solidarity of the extended family act as levers in the improvement of their feeling of happiness. There is nothing surprising about this, because the bases of the social ties among the Inuit have always been associated with the family as an institution (p.390).”

Édouard, Roberson and Gérard Duhaime. 2013. “The Well-Being of the Canadian Arctic Inuit: The Relevant Weight of Economy in the Happiness Equations.” Social Indicators Research 113(1), August: 373-392.