Nunatsiaq News reported last week that an Iqaluit filmmaker named Alethea Arnaquq-Baril has just produced a dramatic romance film about the abandoned Inuit practice of multiple spouses. The filmmaker told the paper that the practice ended with colonization, but it appears from her comments as if she has been able to gain enough information from elderly people to develop a story. 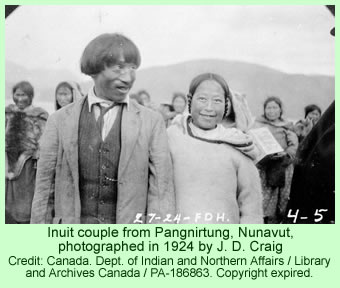 The drama, “Aviliaq,” is set in Canada’s Eastern Arctic in the 1950s. The term “aviliaq” referred to a spouse or a partner and was used commonly when plural marriages existed in Inuit society. “The root of the word is kind of like saying your other half,” she said.

She told the paper that she heard different things about the custom of multiple marriages from her various sources. Some informed her that plural marriages were founded on loving relationships, while others told her stories of second wives being abused or even treated as slaves.

The filmmaker herself was not trying to make a statement about plural marriage one way or the other—she simply wanted to explore the culture of the times that made them possible. She said she was also interested in probing how and why plural marriages were abolished. She wonders if the social changes of the mid-20th century could have been handled “a little more tactfully.”

Her website provides more of her thinking about the need for films about Inuit society. She writes that since the Inuit have had primarily an oral culture, written materials in the Inuktitut language have been slow to catch on. And perhaps worse, outsiders have been the ones to record the lives of the people.

She founded her company, Unikkaat Studios, as a way documenting, through the medium of film, Inuit culture. She feels that there is a great deal to do, a lot of records need to be made and traditions preserved, while elders are still alive who lived in a traditional fashion out on the land. “Filmmaking is such a natural and easy way for Inuit to do this important work,” she writes. It is an effective medium of communication for an oral culture.

She posted an appeal on July 25 on her website asking for assistance for the production of the new drama, which she had scheduled for shooting on August 1 – 4. She already had her main actors lined up, but she wrote that she needed a couple of adult supporting actors and a couple children to play minor roles.

She also wrote that she was looking for help with some of the decorative needs for the set: 1950s-era oil lamps, blankets, house dresses, hip waders, and other such pieces of clothing. She also needed to borrow three boats, two of which would be shown on the beach, but one of which would go briefly out into the water. She writes that she has a very small, local production company and was hoping for the free use of the boats for a few hours, but she could pay a small fee if necessary.

In one of her major works on Inuit marriages, Briggs (1974) emphasized the warm, affectionate nature of traditional husband wife relationships. Both spouses were convinced that the work of the other was indispensable—the camp could not survive without the hunting skills of the man, nor the cooking and sewing skills of the woman. And in the privacy of their homes, the anthropologist observed, couples frequently had close, companionable relations.

While Briggs (1974) does provide some information about earlier patterns of Inuit spouse exchanges and their taking of extra-marital lovers, it sounds from the news report last week as if Arnaquq-Baril, with her fictional exploration of plural marriages, is adding some important perceptions to our understanding of traditional Inuit relationships. And significantly, the filmmaker will bring an Inuit perspective to the discussion. Her 10 minute film will be premiered at the ImagineNATIVE film festival in Toronto, which is scheduled to open on October 22.