Changes occur in all societies, and while many of the peaceful peoples have been able to retain some—or most—of their nonviolent values and practices, very few of them remain static. One of the purposes of these weekly news columns is to trace the changes that do occur, even if events are sometimes less than “peaceful.” A violent episode occurred in a Yanadi community last week, reported with somewhat differing details by two stories in the Indian media. 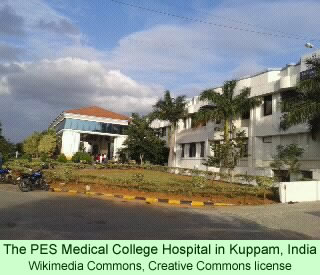 The New Indian Express reported last Thursday that an 18-year old Yanadi girl, whom the paper did not name, was attacked by a 22-year old male, named Bhupathi, for refusing his advances. He found her alone in her hut and, after repeated attempts to court her, each of which she refused, he shot her legs with a “country-made revolver.” Her screams brought other villagers, then the police. She was taken to a hospital in the nearby town of Kuppam, presumably the PES Medical College Hospital, where she is in stable condition.

The attack occurred in Ramakuppam mandal, a Yanadi colony in Chittoor District of Andhra Pradesh. The girl, daughter of B. Shanmugam, a seller of forest products, consistently refused the advances of the would-be suitor. Instead of accepting her negative responses, he continued pestering and harassing her.

After three months, she told her parents. Shanmugam spoke to the young man, asking him to leave his daughter alone. A few days before the attack, other villagers gave the man a thrashing for harassing the girl. On Wednesday last week, while she was alone in the house, he approached once again and asked her to accept his advances. She again refused, and warned him to stop the stalking.

Very angry, he left but returned with his gun, threatening her if she didn’t yield to him. She again refused, so Bhupathi opened fire, aiming for her legs. He fled the scene as the local people responded to the commotion. Police said that some Yanadi possess weapons for hunting wild animals such as boars.

A news story in The Hindu indicated that the girl is named Satya and she is a 16-year old school dropout. She has been consistently turning down the advances of Bhupati (as the paper spelled his name) for several months. That paper says that she was taking care of some cattle last Wednesday when Bhupati forced her to accompany him to a temple, where he tried to get her to agree to marry him.

When she started to call for help from her parents, he pulled out a gun and opened fire. Nearly a half dozen pellets hit her legs. A police official reported that the parents had lodged a complaint against Bhupati, who has since been arrested.

Recent works on the Yanadi, such as the books by Stanley Jaya Kumar (1995) and Rao (2002), don’t provide much helpful background on this particular situation. An older, classic anthropology by Raghaviah (1962) is more useful, though it is getting quite out of date. That author wrote, for instance, that the Yanadi do not pursue settled agricultural work, wandering from place to place in search of suitable food and living conditions.

Clearly, that information is dated. The people in the news story last week are settled in a colony and, according to the one account, Satya was tending cattle when the attacker approached her. But her father, according to the other account, still makes a living by selling natural products he gathers in the forest. So it is clear that while the people in this colony are settled, some still subsist at least partly on gathering activities.

Raghaviah’s book provides information about their social life that also appears to be no longer as applicable as it was 50 years ago. He wrote that the Yanadis never commit crimes of passion, and they are infrequently involved in petty crimes such as cheating. They rarely are confined to jail, and they do not defy established authority. They will always be truthful and honest to any police investigators, even if they may suffer as a consequence.

Furthermore, the author indicates that Yanadi women are as free as men to shift their sex relations to other men when they feel estranged from their spouses. Their relationships are characterized by tenderness, responsiveness, and mildness. Finally, he said that they do not act violently, no matter what the provocation.

Presuming that Raghaviah was accurate in his assessments half a century ago, one can suspect that the settling of the Yanadi into permanent communities may be one of the factors contributing to the breakdown, at least in this case, of their formerly peaceful lifestyle.