The Ju/’hoansi don’t worry about arguments from climate change deniers: they absorb the news, live with fickle rainfalls, and try to preserve their way of life. In fact, their society has adapted to uncertain water sources for millennia. They do not need to be convinced that adjusting to changing climate conditions is essential if they want to continue living in their rural settlements in arid northeast Namibia. 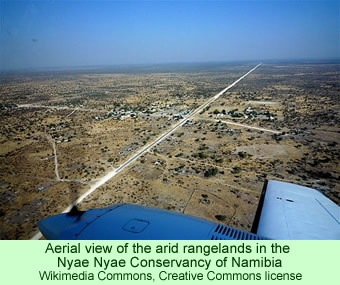 So they are taking action. The Nyae Nyae Development Foundation of Namibia (NNDFN), an organization run by and for the Ju/’hoansi, is participating in a grant proposal to the European Union that will help them address global climate change. Two news stories last week explained the nature of the grant and the specific intentions of the Ju/’hoansi for the uses of the money—presuming the EU does fund the proposal, which appears likely.

The project was announced during the 18th Namibian Rangeland Forum, held at a private resort in the eastern part of the country called the West Nest Lodge. Participants from rural Namibia, Europe, and as far away as Australia heard Mecki Schneider, chair of the Livestock Producers Organization, a Namibian group, present the details of a proposed N$11.6 million (Euros 820,000) project which will initiate a National Rangeland Management Policy and Strategy (NRMPS) for the nation.

A news report in the New Era, a Namibian newspaper, indicated that the purpose of the EU grant was to improve rangeland management, with a special focus on halting deforestation and meeting the effects of global climate change. Mr. Schneider emphasized that conditions for raising livestock in Namibia can be difficult, considering the country’s highly variable rainfall, soil erosion problems, and declines in the productivity of the rangelands. “These challenges are further increased by climate change,” he added.

Laura Imbuwa, the program officer for the EU delegation, expressed her enthusiasm for the goals of the project and confirmed the likely signing of the agreement for the grant to Namibia’s Ministry of Agriculture, Water and Forestry.

The other article in the New Era described the enthusiasm of the delegation from the NNDFN. It reported on a speech to the conference by two of the delegates. Gabriel Hipandulwa, the Programme Officer of the NNDFN and Kahepako Kakujaha, the Nyae Nyae Livestock Consultant for Planning and Grazing, explained the implications of the project for the Nyae Nyae Conservancy, the nearby N≠a Jaqna Conservancy, and the Ju/’hoansi and !Kung farmers.

The two men said that the purpose of the project is to “adapt land use to reduce the vulnerability of the indigenous San communities in Nyae Nyae and N≠a Jaqna conservancies to the impacts of climate change.” The focus of their presentation was on the threat the people feel from the changing global climate. The speakers said that the Nyae Nyae Development Foundation of Namibia intends to reassess and, as much as possible, to change land uses, to reduce overgrazing, to minimize late-season hot fires, and to support local communities as they adapt their livelihoods so they can continue to survive as a viable society.

The rest of the speech by the two men gives details about the specific objectives of the NNDFN: to integrate management planning, maximize food security, and minimize the impact of climate change on the livelihoods of the Ju/’hoansi and !Kung communities. They also indicated that the NNDFN wants to improve crop and livestock production and to minimize the generation of carbon dioxide from hot, late, rangeland fires.

In addition to highlighting the awareness of the Ju/’hoansi about the importance of trying to deal with global climate changes, the news stories prompt the reader to wonder why the NNDFN is so current in its thinking, so willing to adapt and modify the approaches taken by people who still retain their love for at least some of their ancient hunter-gatherer traditions.

The Nyae Nyae Development Foundation of Namibia has a website that begins to explain why the organization is so far ahead of many other groups. It has a mission to “support and empower the San people in Namibia to improve their quality of life economically and socially including land and human rights and the sustainable use of natural resources.” The website provides a lot more information about the objectives of the organization, the history of the Ju/’hoansi people, and some of their achievements to date.

An in-depth description of the NNDFN is presented in Chapter 7 of Biesele and Hitchcock (2013), which carefully describes the history of the organization. The book gives clues as to why forward thinking about an issue like climate change can be expected, for the authors examine the problems, as well as the successes, in the history of the group.

The NNDFN, founded by non-Ju/’hoansi people in the 1980s, went through several decades of growing pains: changing names, identities, leadership and staffing. Those changes were the result of better perceptions of ways to support the Ju/’hoansi, especially the judgment that their greater involvement with the wider affairs of Namibia would benefit the people. The organization also changed from one dominated by expatriates into one run and staffed by Ju/’hoansi themselves.

Problems arose because the organization had established its base of operations at one place, but difficulties of transportation among the Ju/’hoan settlements meant that jobs and benefits went primarily to people living near there. The leaders decided to move to another location which was much nearer to the main east-west road through the middle of the Ju/’hoansi territory.

When the staff and facilities had all moved by early 1991, problems came up again: difficulties of housing, perceptions of favoritism, jealousies, and then sicknesses. The authors carefully explain the attempts to smooth out the problems, especially a major split in the staff in 1992. For a while, the organization ceased to effectively function.

But the Ju/’hoansi way of handling conflicts—carefully talking out issues, then singing and dancing to reaffirm their unity—ultimately prevailed. They eventually healed the rifts of 1992 and have continued to develop a spirit in the organization consonant with the feisty, confident attitudes of the Ju/’hoansi people themselves.