People in some American communities don’t want to say they dislike the Amish, so they complain instead about the manure their horses drop while pulling their buggies into town. The latest horse manure fuss comes from Brown City, Michigan, a small community of about 1,300 people located on the eastern side of the lower peninsula of the state, about 60 miles north of Detroit. 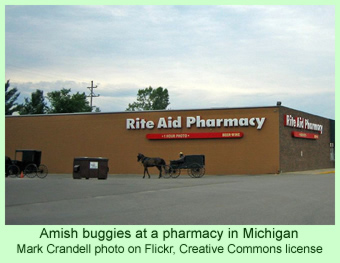 According to a news story last week, local people are talking about the horse manure issue, but the mayor, Christine Lee, and the City Manager, Clint Holmes, are the two complainers directly quoted by the newspaper. Mayor Lee indicated she hopes a solution can be worked out with the local Amish so that there will no longer be any manure left on city streets—and that the steel wheels of their buggies will stop leaving marks on the pavement.

Mr. Holmes, the City Manager, indicated he is checking into state laws that regulate the use of tire chains in the winter to see if they would apply to steel wheels on Amish buggies. Using a set of tire chains except in winter, the mayor said, is “against the law because it does chew up the roads … and steel wheels do the same thing.”

Mr. Holmes said that recent road repairs and improvements cost about $200,000. Mayor Lee added, “we’re pinching the budget as it is. You hate to put that much into the road and then … see the roads being torn up by the steel wheels.”

The newspaper reporter quoted people in Brown City who disagree with those complaints. Paul Gaymon, pastor of the Faith Baptist Church, has seen no cause for concern about the manure dropped by the Amish horses. “It’s just part of life,” he said. His church is located on one of the newly paved streets in the community used by the Amish when they come to town, and he commented that he has seen no damage from the steel wheels.

Angie Williamson, the owner of a video game store in the downtown, a business that the Amish do not patronize, said she does not have any Amish customers—and she does think the whole issue is ridiculous. “We’ve had Amish in our town for so many years and it’s never been a problem. I think they just need something to complain about.”

The reporter also quoted Daniel Yoder, the bishop and spokesperson for the local Amish community. “I think we should try and respect what they are saying. But at the same time, horses have been around a lot longer than cars,” he said. He has discussed the complaints with the City Manager, Mr. Holmes, but they have not yet reached a compromise. One of the proposed solutions—placing bags over the rear ends of the horses—is dangerous because they can spook the animals, which might cause accidents.

Mr. Yoder also pointed out that the roughly 65 local Amish families do contribute a lot of business to the Brown City economy—probably more than the complainers do, he suspected. He argued that while the steel wheels of their buggies can leave small lines on pavements, they cause no structural damage.

Mr. Holmes described the manure complaints as more of an issue of aesthetics than one of health. His statements to the press were pragmatic. He does not want Brown City to ban the Amish from driving into the community “because they do business in town.” It is clear he wants to try and work things out with them. An ordinance requiring horse owners to clean up the manure they produce is a possibility, but he’d rather find a compromise. “What we’d like to do is find some sort of reasonable solution that both communities can live with and proceed from there,” he said.