The Semai effectively utilize products from their nearby forests that give them health and economic benefits, and in the process they are able to preserve their traditional way of life. A journal article about a research project in Malaysia, published in 2012, analyzes an important aspect of their traditional relationships with the forests: the uses made by the Semai of various medicinal plants. 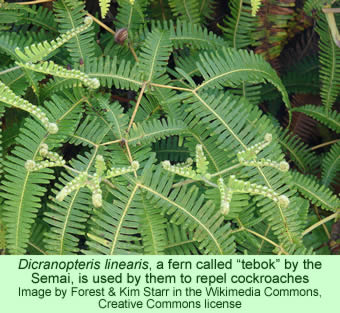 The project was carried out in Kampung Batu 16, a village of 28 households with a population of 278 people at the time of the study. It is located in the Malaysian state of Perak. (The “16” refers to the fact that the village is near the 16th mile marker along a road.) The village consists of houses located on a slope above a river, though they are not too near it to avoid the dangers of high water. The houses are built in what the authors term the “native style,” that is, constructed mostly from plant materials obtained from surrounding forests.

The Semai in the community practice both forest arboriculture and swidden, shifting, cultivation of crops, such as tapioca and hill-paddy. As part of their shifting agriculture, they allow their land to lie fallow for several years after cropping so it can redevelop natural vegetation before it is put into crops once again. The villagers also raise fruits, medicinal plants, and trees that they utilize for timber.

In order to carry out their research, the authors, all of whom are affiliated with the Institute of Biological Sciences at the University of Malaya in Kuala Lumpur, conversed with the two traditional medical practitioners in the village, the people whom the rest of the Semai identified as the most knowledgeable about plants and plant uses. These conversations were held at appointed times. The village medicinal experts showed the authors each plant they were speaking about. In their journal article, the authors carefully identify each plant.

The investigation recorded 37 species of plants that the Semai in Kampung Batu 16 use for medicinal purposes. Table 1 in their article shows not only the correct scientific names of the plants, it also gives the Semai names, the status of each plant, and whether or not it is wild, planted, or both.

The table also shows the uses made of each plant, what parts of the plants are used, the methods of preparation, and what the plant is used for. One example of a plant examined by the authors is Dicranopteris linearis, called “tebok” by the Semai, a common, widely distributed, species of native fern, the “leaves” of which are used by the people in Kampung Batu 16 as a cockroach repellant. The article about that plant in the Wikipedia describes various other uses for those ferns but it does not mention any other societies that are familiar with its anti-roach properties.

The study shows that there is no single, dominant, family of plants in the Semai pharmacopeia. It revealed that 23 of the plant families had only one, single, useful medicinal plant, and 7 more had two. Perhaps even more significantly, out of the 37 species, 31, or 84 percent, are wild, native plants, while only 6 are non-native and cultivated.

From that data, the authors conclude that the Semai from this village depend for most of their medicinal needs on traditional, native, wild resources. Only 16 percent of their needs are filled by plants originally found outside Malaysia that are used with knowledge coming from outside their own traditions.

Another interesting finding is that 14 out of the 37 plant species are used in rituals—healing, protecting, and harvesting. The authors suggest this demonstrates how the Semai associate their well-being, health, and illnesses with the realm of the spirits.

The most significant conclusion of the study is that the Semai, at least in this village, depend heavily on the medicinal plants that they gather in the natural habitats surrounding their community. They are much less dependent on cultivated plants for medicinal uses. “This suggests that the forest is still an important source of medicine for the Semai,” the authors emphasize (p. 210).

Other studies have shown that Malay villagers in Malaysia utilize cultivated plants and non-natives more than the Semai do. The authors speculate that the situation may change as the forests traditionally used by the Semai are increasingly developed and industrialized. That will pressure them to adopt modern medicine, to “change with the times,” as the writers put it.

The authors also suggest that younger generations of Semai may be less interested in acquiring knowledge about the traditional uses of plants. They argue that preserving the traditions and knowledge of subjects such as medicinal plant uses is essential before that knowledge is lost.