Halloween is almost a month past but memories of ghost stories told around the open fire—along with the s’mores—will live in children’s memories for a lifetime. Polly Wiessner, an anthropologist who has studied the Ju/’hoansi since the early 1970s, decided to focus a research project on that subject: the importance of campfire stories for the Ju/’hoan people. Her results, published at the end of September, provide some fascinating insights into the ways they managed to maintain their relatively peaceful society. 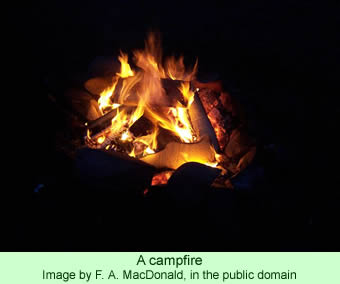 She opens her report by emphasizing the impact on humanity of the control of fire. Cooking increased the value of foods to people and fostered anatomical advances in the human frame. Fires protected people from predators and, most significantly, by encouraging them to bring food to a central location for cooking, they altered their socializing tendencies. Firelight allowed people to have time for social interactions after sundown, to engage in activities that could be different from the economic and productive work of the daylight hours. Activities, after dark, could include telling stories.

Wiessner mentions archaeological evidence showing that the human use of fire may extend back a million years, but her focus is on the Ju/’hoansi. She is careful to explain that the ways of a hunting and gathering people of 1974 cannot be used to extrapolate the habits of our hominid ancestors of 400,000 years ago. She uses the past tense in her article since many aspects of Ju/’hoansi society have changed over the past four decades, though since they have retained at least some of their social practices, neither the past tense nor the present tense is completely accurate.

She gathered data during conversations, both during the day and at night around a fire, for three months: July, August, and November 1974 at /Kae/kae and Dobe, Ju/’hoansi communities in northwest Botswana near the border with Namibia (then Southwest Africa). She recorded conversations that included five or more adults and that lasted for at least 20 to 30 minutes. She noted the topics that were discussed, the names of participants, principle points made, people who were the subjects of the conversations, the time of day and settings, whether there was praise or criticism involved, and so on.

When she went back to her old notes in recent years, she found some of the details to be lacking, so she made return trips to the same communities to revisit old friends—three times in 2011 – 2013—to review and revise the memories of the old stories. As she compiled her data, her results emerged. Daytime conversations, at least among the Ju/’hoansi, had a very different tone and substance from nighttime conversations around the campfire. Her research allows her to compare the diurnal social activities of a hunting-gathering people and their nocturnal patterns.

By day, the Ju/’hoansi spent 31 percent of the time talking about economic issues, such as foraging plans, expectations for hunting, and the availability of resources. They spent slightly more time, 34 percent, complaining and criticizing others about suspected violations of social norms, though sometimes those criticisms were unfounded. “Verbal criticism, complaint, and conflict (CCC) were the spice of Ju/’hoan life that made group living viable,” the author writes; “if not worked out by talk, people voted with their feet and departed (p.14029).” Daytime conversations also included joking (16 percent of the time) and talk focused on people from other ethnic groups (4 percent). When they rested in the daytime shade, the people sometimes told stories.

But the harsher moods of the daytime, the talk about necessary, critical issues, came to an end as the sun went down, and as the Ju/’hoansi gathered around their campfires they mellowed out. They would talk, dance, or just make music together. Larger or smaller groups would gather on different nights as everyone put aside their concerns about economic issues or social complaints. An astounding 81 percent of the lengthy fireside conversations the author recorded were stories.

Wiessner indicates that the storytellers, who could be men or women, would primarily focus on known people and their escapades, though they would not single out heroes for praise. There was no moralizing, and certainly no self-promotion in the stories, though doubtless the listeners took lessons from the tales. Listeners might rehash details when the story was over, perhaps rolling with laughter, or sitting in stunned silence, or allowing their faces to glisten with tears, as the stories may have prompted.

Even in 1974, Wiessner writes, folklore and myths were in decline in Ju/’hoansi society. Furthermore, the nights were not exclusively reserved for storytelling. Sometimes the conflicts of the daytime would spill over at night, with insults being hurled from one hearth to the next. At times the economic concerns of the daytime might be rehashed.

Overall, however, the agenda of the Ju/’hoansi daytime was social regulation. More than 67 percent of the conversations about such social issues as food sharing, kinship concerns, land tenure, exchanges of goods, and egalitarian relationships included verbal sanctions. As the author summarizes, “day talk thus vented jealousies, enforced norms, and settled a wide range of disputes (p.14030).”

Nighttime conversations covered the same ground but quite differently. For example, while a conversation during the day might focus on a current marital problem, at night the same people might tell stories about marriages in the past. In the daylight, the people could discuss the specifics of a particular gift exchange, while at night they would tell stories of trips to distant places to cement exchange relationships. Campfire storytelling developed sympathy, trust, understanding, congeniality, and a sense of humor among the participants, all important components of a feeling of peacefulness.

The author examines anthropological literature about other hunter-gatherer societies and finds many similarities among them and the Ju/’hoansi. Gossip appears frequently in the social control conversations of the daytime in many h-g societies, but not in their gatherings at night. Economic concerns provide issues for diurnal rather than nocturnal discussions among numerous peoples. The literature for 60 hunter-gatherer societies, as shown in the eHRAF database, shows that “night was prime time for entrance into imaginary worlds of the supernatural (p.14032).”

Wiessner covers an interesting topic and writes evocatively about it. She doesn’t tell us if graham crackers, marshmallows, and chocolate bars—s’mores—have entered the food staple of the contemporary Ju/’hoansi, but her evidence about the value of social harmonizing through storytelling around a campfire is compelling.