When a Tristan Islander passes away, everyone in the community pauses to show respect for the deceased, whether or not they were members of the immediate family. Dawn Repetto posted a cemeteries page on the Tristan website last Thursday to provide, with her story and pictures, some insights into the ways the Islanders handle deaths and burials. 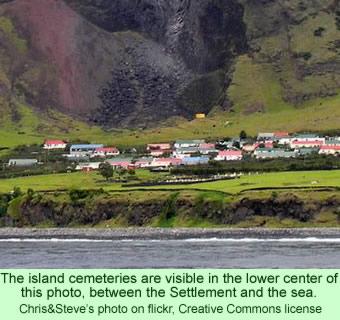 The island flag is lowered to half-staff when someone dies, and if the death occurs during a weekday, workers will pause at their jobs. The Albatross Bar closes for the evening and any celebrations planned for the day are cancelled, unless the family of the deceased makes an exception. Young women will visit island homes to gather flowers which the women will then use to make wreaths.

Relatives and friends will attend a funeral service at the Camogli Hospital, after which the corpse is carried in a Land Rover to the St. Mary’s Church, with the mourners following behind. After the memorial service in the church, the deceased is taken to the newest of the three island cemetery for internment. When the formal services are over, the Islanders visit in the home of the deceased, seeking to comfort the family. Ms. Repetto writes, “As with any event on Tristan, the community pulls together whatever the occasion and this keeps us strong.”

The author continues her report by describing the history of the cemeteries at the Settlement, plus efforts made from 2009 through 2014 to restore them. Fortunately, she also provides many good photos along with her story. For Cemetery No. 1, with burials dating from 1822 – 1923, one of the major restoration problems was that, although the Islanders knew who was buried in it, there was a lot of uncertainty as to exactly which grave belonged to which ancestor. To address the problem, the people erected a plaque indicating the names of all the forebears buried in the graveyard. A small white cross was then placed at each grave.

Identifying gravesites in Cemetery No. 2, with burials from 1923 – 1975, did not pose such problems. The restorers found only two graves that they were unable to identify. Cemetery No. 3, from 1975 – current, just needed a few plaques. In 1995, while Alan Walters was serving as Administrator on the island, he prepared a map of the graves in the island cemeteries, and his map proved highly useful to the contemporary Islanders committed to restoring the graveyards.

When the work was completed, some elderly Islanders were invited to check out the cemeteries and make sure all the wooden grave markers were correct. After everything was approved, permanent plaques were ordered from a firm in Cape Town. Groups of Islanders pitched in to clean up the two older cemeteries by removing unwanted brush, debris, and long grass.

Many of the older graves had headstones made of the soft, volcanic stone found on the island but they are not very long-lasting, so the plots today are marked with marble imported from South Africa. Ms. Repetto indicates that the cemetery does look better, but she admits that she has a personal preference for the ones made from the softer, native stone.

An unusual problem occurred at the grave of William Glass, the founder of the Settlement on the island. He was the unofficial “Governor” of the colony until his death in 1853. Members of his family, who had moved to the U.S., had sent a headstone for his grave in the decade after his death. In late October 2014, the cemetery restoration group learned that the top of the headstone for Mr. Glass had broken in half. The restoration group has epoxied the two pieces back together, and they plan to reinforce it with an iron or a concrete backing.

Ms. Repetto concludes her report by writing that the “Island community takes great pride in the island cemeteries and visits them every weekend with flowers.” She argues that the Islanders had not forgotten their ancestors, but the disruptions caused by the volcanic eruption in 1961, the temporary exile to the UK, and the deaths of elders had caused younger people to lose their knowledge of who was actually buried where. She opines that, with the two older cemeteries now restored, the Islanders will care for them the same as they do the present cemetery.