Education is the best way to prevent child trafficking in Rural Thailand, argues Mickey Choothesa, the founder of the anti-trafficking group Children of Southeast Asia (COSA). In an article published last week in the online magazine Vice.com, Mickey points out that he devotes himself to saving one kid at a time, day by day, village by village. “I may help one girl,” he tells the journalist, “but that girl could go on to educate and save more.” 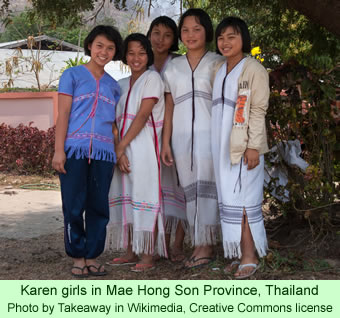 The journalist preparing the news report for Vice.com, Adam Ramsey, traveled to rural Northern Thailand to visit Baan Thatafang, an extremely remote village in Mae Hong Son province that is quite difficult to reach. It is located on the Salween River across from Burma. Trafficking in this area has become a serious problem, especially among the Karen people. The point of the news report was to investigate the issue.

The writer, basing his information on interviews with NGO officials, teachers, police, and authority figures, concludes that trafficking is rife among the hill tribes of Rural Thailand because many of the people do not have legal identity cards. He writes that there are approximately one million ethnic minority people living in rural North and West Thailand, and officials estimate that about 50 percent of them do not have any forms of identification.

They often live in informal, shifting village conditions, subsisting on swidden agriculture. The people without any identity documents are not allowed to legally own land, travel freely, work outside their own provinces, access medical care from the state, gain legal marriage licenses or school certificates, or have the right to vote. They are often desperate people, for whom selling themselves, or their children, to traffickers appears to be a viable way of improving their lives.

Mickey Choothesa explains to the author that his group tries to protect vulnerable girls who come from communities that are attractive to traffickers. Rather than rescuing girls, he tries, with the approval of their parents, to take them to his shelter, get identity papers for them, and prepare them for viable futures. “Usually, if they have opportunities to stay at school, a strong community base, or any other opportunities really, you find that they will not get mixed up with trafficking,” he says.

At its base in the Northern Thai city of Chiang Mai, COSA not only maintains a large shelter, it also provides outreach programs for the hill tribes, school bus services to remote villages, and educational opportunities. The girls live at the shelter and attend schools nearby. Asked how he identifies children that are at risk of being trafficked, he points out two girls whose mother is a sex worker. The girls lived at home and had never attended school. They were thus at a high risk of being trafficked, so he took them into his shelter.

Phensiri Pansiri, the program office for another Thai anti-trafficking group, says that it is essential for the NGOs to work closely with the Thai authorities about trafficking issues, a perception that Mickey agrees with. They both recognize the risk that some officials or police may be corrupt and in the pay of the traffickers, so they must be careful with whom they speak and how much information they share.

Pansiri told the journalist, “we have had times before where we have given details to some police and the details were leaked. Then you know that person cannot be trusted.” Mickey adds that there is lot of corruption, because there is a lot of money involved with human trafficking. They both feel strongly about the importance of working with the authorities, however.

When Mr. Ramsey, the journalist, accompanies Mickey and a police official, Captain Pauridet, whom they do trust, in the trip to Baan Thatafang, they visit a local primary school. A couple 13-year old girls, Karen sisters, are shy and hesitating in their responses to questions. Mickey tells the journalist that he will be meeting with their parents the following week to see if they will be allowed to come to the COSA shelter. “It’s just not safe for them at their homes now,” he explains.

Outin, a teacher at the school, tells the writer about the important work of the NGOs in helping to get children registered. But a huge number remain unregistered, she says. She is quite aware of the crime of human trafficking and she adds that, in different ways, a majority of the children are vulnerable to it. The only solution is for them to gain legal IDs and then to go on to high school.