El Universal, a major Venezuelan newspaper, published a feature last week on the reasons for the recent disruptions and threats to the Piaroa people south of the Orinoco River. The major reason, according to the paper, is coltan, which is now being mined in the area. 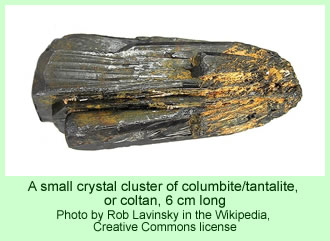 “Coltan” is short for columbite-tantalite, a scarce mineral ore which produces the elements niobium and tantalum. The tantalum derived from coltan is used in the manufacture of tantalum capacitors, which manufacturers include in cell phones and other electronic devices. For years, the mining of coltan in the northeastern D.R. Congo has fostered warfare among various armed factions—violence which has seriously affected the people of the Ituri Forest region, including the Mbuti.

The Wikipedia article on coltan refers to the recent patterns of violence in the DRC as an example of a “resource curse,” a term suggesting that rich resources can produce poverty, corruption, and civil wars in areas where the riches are mined. It appears from the El Universal article as if this “resource curse” is also developing in Venezuela in the coltan mining region.

Alvaro Rotondaro, the owner of a large farming operation located about 180 km south of the town of Caicara del Orinoco, in Bolivar state, near the border with the state of Amazonas and on the northern edge of the traditional Piaroa territory, alleged that the illegal smuggling of coltan is fostering the presence of armed men in his area. He said that they are members of the Colombian guerilla group FARC, which has almost completely taken over control of the region.

The illegal mining operations employ Piaroa youths to transport the coltan ore by motorbikes to urban centers such as Puerto Carreno on the left bank of the Orinoco in Colombia, where it is purchased by buyers. This activity conflicts with the harmonious ecotourism that the Piaroa communities are trying to develop in their beautiful region, El Universal states. The mining is also causing serious harm to the natural environment around the indigenous villages.

Sr. Rotondaro says that protests have been lodged with appropriate government agencies, but so far nothing has been done to protect agricultural producers such as himself or the Piaroa communities. The newspaper writes that this situation has been repeatedly denounced by the Piaroa and other indigenous organizations. Stories carried by this website in July and November 2013 have described these developments. More recently, Piaroa women publicly protested the increase in violence in and around their villages caused by the mining and the armed guerillas.

El Universal quoted from a Piaroa statement published on May 15, 2013, which indicated their unequivocal opposition to the illegal mining and the presence of the FARC fighters. In their document, they clearly defined themselves as a people without arms and as a peaceful society (“tradicionalmente y ancestralmente somos pueblos sin armamentos y pueblos pacíficos”).