The concept of historical trauma, sometimes used to describe societies that have suffered from the stresses of serious traumatic events, might be an appropriate key to understanding recent Inuit experiences. Allison Crawford, a psychiatrist at the University of Toronto, examines the situation of the Inuit in the Baffin region of Nunavut, now known as the Qikiqtani region, with a careful, scholarly lens. 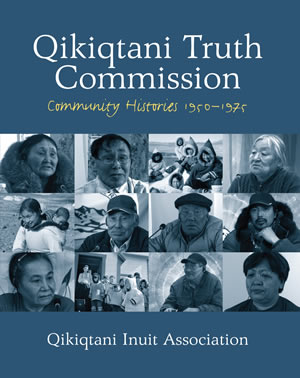 Crawford looks at several types of sources—Inuit oral histories, testimonies given to several official commissions, artistic productions, and other social discourses—to see how the Inuit themselves have expressed their collective experiences at the hands of the qallunaat, the southern Canadians. The goal of her investigation was to see whether the historical trauma (HT) concept really is an appropriate way to explain Inuit experiences during the past half-century.

The author begins by comparing HT to posttraumatic stress disorder (PTSD). Development of the concept of PTSD allowed the pains and wounds suffered by individuals exposed to stressful traumatic events to become recognized. Similarly, historical trauma provides a comparable recognition of collective wounding and painful experiences by entire societies. Events such as the Holocaust for Jews, slavery for African Americans, Hiroshima for the Japanese, and apartheid for South Africans can reasonably be described as HT phenomena.

Inuit relations with Canadians from the southern part of their country may also be similarly conceived of in an HT framework, Crawford argues. The key concepts of HT are that it is a collective issue, not an individual one; that it is the result of pains inflicted on a group; and that it is cumulative. That is, the traumatic effects are passed down to future generations through what the author terms “intergenerational transmission.”

The indigenous peoples of North America have had their lands stolen, their native languages suppressed, their ceremonies undermined, their spirituality destroyed, and their values upended. As a result, their cultures have been eroded and their social orders mostly demolished. Thus, the HT theory predicts that individual responses to these traumas will show up for generation after generation as depressive behaviors, low self-esteem, anger, anxiety, and suicides.

Crawford provides specifics. In the 1990s, the Royal Commission on Aboriginal Peoples (RCAP) in Canada investigated the events relating to the history of contacts between non-Aboriginal and Aboriginal peoples. The commission acknowledged that the Inuit experience was different from that of other Canadian Aboriginal societies in that the changes forced on them occurred relatively recently.

The RCAP report in 1996 described many instances of abusive colonialism and contact with non-Aboriginals, including forced residential schooling, attacks on traditional beliefs, destruction of Inuit relationships with the land, and enforced resettlement programs. As a result, many Inuit are living, as one elder testified, with their children “in deep despair of sorts, because we as adults have not healed from the pain of growing up in a destructive and dysfunctional environment (p.345-346).”

The Qikiqtani Truth Commission (QTC) in 2007 produced an even more dramatic tale of collective traumas suffered by the Inuit at the hands of the non-Aboriginals. A wide range of people across Nunavut testified to the commission about the ways they had been treated by government agents ever since 1950. People talked about elderly relatives being sent south in ships, never to be heard from again since there was no way of communicating with them. Another traumatic event for the Inuit was the enforced killing of their sled dogs.

The QTC concluded that the “Canadian government has initiated profound social, economic and cultural changes in the North that have had a far-reaching, negative and continuing influence on the lives of Qikiqtani Inuit. The vast majority of these decisions were made without consulting Inuit and the consequences are still felt today (p.346).” The commissioner in charge of the investigation reported that many times the individual Inuit people felt as if testifying before the commission had finally allowed them to unburden themselves of their feelings. People had been reluctant to tell their children the details of the things they and their parents had suffered.

The QTC heard testimony from about 350 witnesses, and its report is exemplary for documenting the HT phenomenon. The investigation and its report provided a voice for the traumatic events of the previous decades, and the process created extensive evidence of the importance of the HT model. The report indicated, “for many years now, Inuit elders in the Qikiqtani region have been haunted by a deep sense of loss, shame and puzzlement (p. 347).”

Crawford investigated other possible sources of information that might reveal the accuracy of the HT model for understanding Inuit society. She found that Inuit art provides a lot of evidence for the existence of collective, social trauma—HT at work on an everyday basis. Not only do these works of art depict tragic events such as suicides, they also show that the historical traumas are still in process—the drama is continuing to unfold in contemporary communities.

The point of the author’s discussion is that HT is not a simple concept—violence occurred before, during, and outside the period of the historical traumas. It continues today. The implication of a drawing showing a person who has committed suicide is that it is a contemporary issue, not just an historical one. Furthermore, the art does not simplify. A drawing showing violence against women takes place in a traditional camp, presumably in a pre-conquest situation. The linear causation model proposed by HT theorists does not always work very neatly in the Inuit context.

Crawford reprints Annie Pootoogook’s drawing “Memory of My Life: Breaking Bottles,” which the author describes as dispensing with tried and true images from Inuit art. It shows the artist’s figures living in matchbox houses and handling contemporary issues such as alcohol consumption. The “memories” she alludes to are not nostalgic vistas of an idealized traditional past, but views of contemporary social realities. The author points out that Pootoogook herself suffers from addictions, poverty, and homelessness, though her works of art sell in southern Canada.

Crawford concludes that since mainstream psychiatrists have problems with the concept of PTSD, the concept of HT is also unlikely to become quickly favored. Nonetheless, she writes that there is a reasonable probability that HT does explain the intergenerational transmission of social malaise among the Inuit. In addition, while it is difficult for any of us to step outside our own narratives, which support our own ways of understanding the world, Crawford argues that being aware of the Inuit experience will allow us to at least be more open to considering multiple perspectives on life.

Crawford, Allison. 2014. “‘The Trauma Experienced by Generations Past Having an Effect in their Descendants’: Narrative and Historical Trauma among Inuit in Nunavut, Canada.” Transcultural Psychiatry 51(3), June: 339-369