Several scholars deny the existence of peaceful societies, arguing that they are simply a myth, but Douglas Fry characterizes their attitudes as a “unicorn factor,” after the mythological animals. Deniers maintain that peaceful societies, like unicorns, are figments of the imagination, but Fry disputes that. Last week, as part of a presentation titled “The Creation and Maintenance of Non-Warring Peace Systems,” he countered their arguments through a careful recital of sound scholarship. 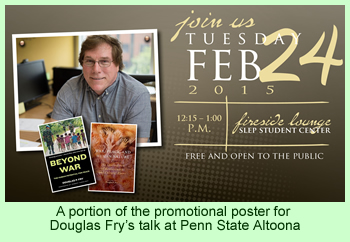 The world’s foremost authority on peaceful societies, Fry began his February 24th talk on the campus of Penn State Altoona, in Altoona, Pennsylvania, by describing the well-documented existence of those groups. He defined a peaceful society as a group that experiences low levels of aggression—one that has systems of beliefs that solidify and reinforce existing predilections for nonviolence. Furthermore, those societies strenuously avoid physical aggression by effectively mediating conflicts in one way or another.

He provided several examples for his audience, consisting primarily of Penn State students and faculty: the Pemon people of South America, the Paliyan society of southern India, and the Icelanders. He cited literature that referred to the extremely low levels of violence and homicides among those groups. The speaker documented, in his book The Human Potential for Peace, over 80 internally peaceful societies. However, that was just a sampling of what he suspects may be many more, ranging, according to their patterns of social organization, from bands up to modern nation states.

The major focus of Fry’s presentation was on peace systems—not just individual, internally peaceful societies, but clusters of non-warring peoples that work together to avoid warfare with each other. He showed a slide that listed six primary characteristics of those peace systems. The first one is that individuals in those clusters have a larger, broader sense of identity than just for their own groups. Other characteristics are that they have various approaches to interconnecting with one another and they have many ways of promoting interdependence.

Another important characteristic is that they share values, which are “the principles that guide our lives,” the speaker said. The values in these societies, of settling differences non-violently, differ from the approaches of warring systems, where the primary values are courage, fortitude, and bravery. Other characteristics of peace systems are that the members share common ceremonies and rituals, and that they have erected various kinds of conflict resolution procedures or governance structures to settle disputes nonviolently.

Fry has amassed details on numerous peace systems around the world, but he focused on two examples to solidify his argument: the Xingu group of societies in Brazil, and the European Union. The ten different societies of the Upper Xingu River have been carefully studied by outside visitors and ethnographers for well over 100 years.

How do they do it? Fry answers his question by dipping back into his six characteristics of peace systems. He explains that the Xingu societies are interdependent in terms of their ceremonies, their marriages, and especially their trade. Each group specializes in making different products that they can then trade with the others. For instance, one society specializes in making hardwood bows, another in salt. Perhaps other villages could make those same products but they don’t—they want to maintain peaceful, interdependent trade that fosters good social relationships. “Trade means trust,” at least among those peoples, the speaker said.

The Xingu people also share anti-warring values and they enjoy ceremonies such as singing and dancing together. When they get annoyed with one another, they get into wrestling matches to dissipate their angers. They feel that violence is absolutely immoral and disgusting. They will harangue others, and perhaps complain a lot to blow off steam. But they won’t accept or resort to physical aggression.

The speaker then moved from the group of traditional societies in Brazil to a more modern grouping of states that purposely decided to avoid having any more wars: the European Union. The states of Europe formed the union in order to develop an effective peace system, one that is different from the Xingu but overall is quite comparable. Fry emphasized the formative role of Jean Monnet, the French diplomat, who played an important part in founding the European Union.

Monnet and his colleagues in Europe wanted to prevent more of the horrors and devastation that the continent had experienced in the First and Second World Wars. While there may continue to be crises in the union over various economic and political issues, the point is that the member countries are not about to go to war. They’ve had enough of them over the centuries. Monnet and his colleagues deliberately created their peace system—and it seems to be working.

The speaker identified numerous developments by the European Union that would fall within the listing of six major characteristics of peace systems. The EU has common symbols, such as a flag, a currency, passports, and driver’s licenses, all of which help prompt a higher-level European identity. The young people still think of themselves as Finns or Italians, but with increasing frequency they now also identify themselves as Europeans. It’s working.

One of the European parliamentarians said, according to Fry, “peace, therefore is the primary achievement of the process of European integration.” War has become unthinkable among the countries of the European peace system. Their group mentality is that they never again want to see warfare such as their parents and grandparents experienced. They downplay nationalism, while they expand the vision of “us” to now include “us and them.”

Dr. Fry concluded by quoting from one of the epigrams of this website, the quote from Kenneth Boulding, who wrote that “anything that exists is possible.” Peace systems already exist, and therefore, more broadly, other groups of peoples or states could also develop similar groupings focusing on ending warfare and violence. Growing out of Boulding’s thought, he closed by saying that the vision of a possible world without war “is the first step towards creating a world without war.”