In early January, the forest department in Tamil Nadu started training 16 young Paliyan men to work as guides for a new ecotourism trekking venture. They planned to take trekkers to forested sites in the state such as the Kutladampatti Falls, already a known tourist destination, or to another place called Kiluvamalai. 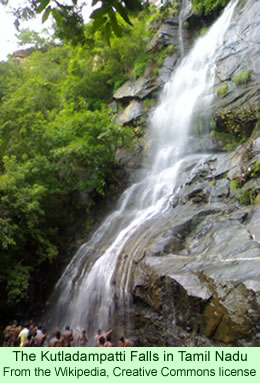 The young men selected for the program were quite familiar with finding their way through the mountains, so the officials with the forest department in the city of Madurai felt they would primarily have to be taught skills needed for working with the tourists. Officials organized the first trek to Kiluvamalai for Sunday, February 15th. It included six of the newly trained guides to accompany the tourists. Also, two of India’s major newspapers, the Times of India and The Hindu, sent reporters along to cover the story of the maiden trek.

Easwaran, at 19 the youngest of the six guides, was polite and well-mannered to the tourists as he pointed out the trees and described their importance. D. Murugendran, a 25-year old guide, explained to the Times of India that they were all trained for good communication skills with the visitors. “Today, we have enough confidence to face people and talk to them,” he said.

J. Mary Praveena, the coordinator for ecotourism for the Madurai District forest, told the newspapers that they have emphasized language training in English for the 16 guides. They have also given them motivational training, first aid lessons, and classes on basic etiquette and confidence building. After a couple more local treks, the forestry officials plan to take the guides to major tourist spots like Kodaikanal and Thekkady. Nihar Ranjan, District Forest Officer, said that the agency also plans eventually to train the youths in anti-poaching and fire watching for the department.

The 16 young men are all from the Kurinji village, where they actively gathered forest products—at least they did until the forest department solicited their interest in the new program. They have formed the Vanakuil Self Help Group (SHG), with one of their members, V. Solairaja, serving as its president.

Solairaja said that before the forest officials approached them, they were making about Rs. 500 per week from the sale of the forest products they were able to gather. Eswaran added that they were now assured of a fixed income from the employment by the Forest District.

The youths explained that the fee of Rs. 600 collected from each trekker covered the basic expenses of travel and food, after which the rest was shared among the guides. At the end of the first trek on Sunday the 15th, they had realized a net profit of Rs. 6,000, half of which the six young men shared, and half of which they used for the further development of the SHG.

One of the guides, S. Vasiappan, explained the profit sharing a bit more clearly: “After receiving Rs. 1,000 for working as an eco-guide, we will be depositing Rs. 500 in our [SHG] accounts for community development of our tribal community.”

But in addition to finances, the young Paliyan men clearly enjoyed their first experience as eco-trekking guides. Eswaran proudly told The Hindu, “today we enjoyed interacting with the trekkers who asked us about different plants and birds and we told them whatever we knew about the forest.” A. Vasiappan added, after the trek was over, that they themselves had learned a lot from their experience with the tourists.