The National Geographic announcement on its website last week of the supposed discovery in eastern Honduras of a mythical “lost city” received worldwide publicity. The announcement caught the attention of scholars who decided to debunk the claims of “discovery” and “lost civilization.” The media appeared, to the scholars, to sensationalize the facts, a tendency which the “discoverers” seemed to be all too willing to play into. 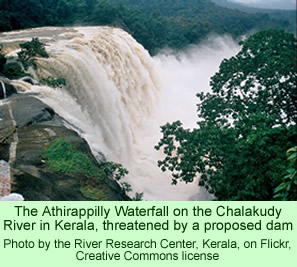 A much less widely noticed archaeological discovery involving the Kadar people was publicized in a couple major Indian news sources over the past few weeks, one of which also illustrated the tendency of the media to sensationalize. The Hindu first published a story the week before last indicating that a prominent Indian historian, M.G. Sasibhooshan and his colleagues, had discovered two Neolithic stone axes in the bed of the Chalakudy River in the Thrissur District of Kerala State. The famed Athirappilly and Vazhachal waterfalls on the river are located in that area.

The Hindu article does not speculate or sensationalize. It gives the dimensions of the two axes, and it indicates that the polished tools probably dated from the Neolithic period, roughly 5,000 to 1,500 BC. Dr. Sasibhooshan told the press that it was the first time a stone axe had been recovered from that river.

Last week, the New Indian Express also covered the story, with its own photos of the two axes and its own take on the import of the discovery. The headline read, “Neolithic Weapons Recovered from the Chalakkudy River Basin.” The stone axes, the writer of the headline presumably felt, must have been used in battle. That writer evidently did not consider the possibility that the makers of the tools may have intended them for other uses, such as cutting trees or hunting.

And the culprits who made these “weapons” were evidently the Kadar, since Dr. Sasibhooshan had suggested to the New Indian Express that they have traditionally lived in that area of the Parambikulam Forest Reserve. The newspaper elaborates that the Kadar have lived along that section of the Chalakudy “for generations in harmony with rare flora and fauna,” though they have been neglected by the state government.

The newspaper article provides a few more bits of information. It indicates that the Kadar are employed by the Forest Department under the aegis of village forest councils, called, in Kerala, the Vana Samrakshana Samithis. It also reports that their earnings are minimal compared to other tribal groups. Finally, it mentions the threat to some of the Kadar communities from the proposed Athirappilly hydropower project.