The Mbuti living in the Ituri rainforest are suffering from violence fostered by illegal mining in their region and the armed rebel gangs who profit from it. According to a news story last week in Aljazeera.com, titled “The Struggle to Save the ‘Congolese Unicorn,’” the violence not only affects the Mbuti and the other residents of that section of the D. R. Congo, it also is having an impact on the okapi. A forest animal related to giraffes, okapi were referred to as “unicorns” by the original Belgian colonists. 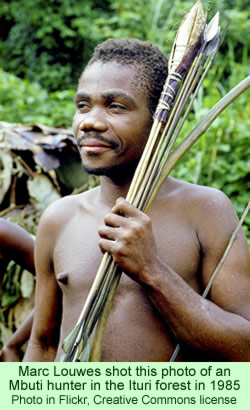 The Okapi Wildlife Reserve, a UNESCO World Heritage Site, occupies about 5,300 square miles of the 25,000 square mile Ituri forest. The rare animals, only found in that section of the DRC, used to number about 5,000 in the reserve and 30,000 total, but their numbers appear to be dwindling. Over the last 24 years, the number of “unicorns” may have dropped to half that due to mining, poaching, and increases in the human population in the forests.

The Aljazeera journalist, Elaisha Stokes, writes that the Mbuti who still live in the Ituri, referred to by other Congolese as “pygmies,” continue to subsist at least in part on their traditional, forest-based, hunting and gathering. But the poachers and miners have harmed the ability of the Mbuti to secure much food from the forest, which threatens their very future there.

The Aljazeera article is thorough and detailed. It describes the illegal gold mining operation in the forest, the rebel groups that profit from it, and the various actors who are trying to correct the situation. The interest here is in the information it provides about the Mbuti themselves.

Stokes writes that when the reserve was created, it permitted the traditional net and arrow hunting methods used by the Mbuti, but not the use of guns, and of course it prohibited killing okapi. The reserve was divided into zones so that villagers were permitted to continue their agricultural practices. Part of the reserve was designated as a conservation zone and mining was outlawed throughout.

The Mai Mai Simba, a rebel group that runs the gold mining operation at a place referred to as Muchacha, has no clear mission and no effective leadership. But there are frequent reports of rapes, kidnappings, and murders at the hands of the rebels. In a conversation with Aljazeera, the leader of a local youth group in Epulu, the community at the center of the reserve, castigated the rebels for their violence.

The author visited an Mbuti camp, Banziyi, to find out how the situation may be affecting them. Musa Makubasi, whom Stokes refers to as the Mbuti chief, told her that they “need a good catch this year.” They have been coming back from their hunts in the forest without enough game animals, and Makubasi blames this on the people working at the Muchacha mine. He has gathered the band together for a traditional hunting ceremony, hoping it will please the ancestors and foster a better harvest of game.

One of the elders in the band, Michel Ngumu, told the journalist that the gods of the forest are angry. He has worn his loincloth and hunted using traditional Mbuti net-hunting methods all his life. In fact, his life is in the forest, he said. The Mbuti today mostly wear western-style clothing and live fairly near Epulu. Ngumu deplored the fact that the younger Mbuti no longer care to pursue their traditional ways of subsistence. They prefer to work at the mining sites and become drunk with the money that they earn.

Makubasi admitted that some younger people are working for the mines, but he maintained that most of them are excluded from the various commercial pursuits in the Ituri—because many Congolese people look down on the “pygmies” as lesser human beings. Makubasi countered this attitude by maintaining that the Mbuti are “the first people of the Congo.” He argued that the real problems are the dangerous conditions in the forest. Sometimes, their hunting parties run into armed rebel groups. Mostly, the latter leave the Mbuti alone, but sometimes they don’t.

The Banziyi band has moved deeper into the forest, where the journalist describes a ceremony they performed to seek protection and blessings from their ancestors. They have pooled their scant earnings of Congolese francs received from odd jobs and have purchased a chicken. While the camp members chant, Makubasi recites the names of ancestors. The chicken is held over an altar and its throat is slit. The blood from the slain chicken is smeared on the foreheads of the men participating in the ceremony as a message to the ancestors: protect us since we still honor you.