The Egyptian Ministry of Housing is building a resettlement community near the city of Aswan for the Nubian people but it is having a hard time attracting settlers. 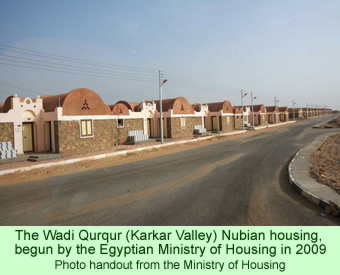 According to a news report published last week in the Daily News Egypt, the project to build housing in the Wadi Qurqur, referred to in the article as the Karkar Valley, originated in 2009 with officials in that ministry. Their plans were supported by the Ministry of Defense.

A news story in 2010 described the promise of the project. It was to provide housing for Nubians who had been evicted from their villages along the Nile when the Aswan Dam was closed 50 years ago. In addition to the housing, the agency was intending to construct schools, post offices, roads, markets, mosques, youth centers, family centers, bakeries, and utilities in each village in the Wadi Qurqur.

So far, the report indicates, not too many Nubians have resettled into the new communities. During a tour of the project, Minister of Housing Mostafa Madbouly said that providing water to the communities has been a problem that his agency is addressing.

In the villages of Old Nubia, large water wheels used to bring water up out of the Nile to irrigate the fields. The water wheels required cooperative systems for maintaining the irrigation systems, and they fostered the sharing of water resources, both, arguably important aspects of their peaceful social system. Conditions in the newly constructed villages in the desert are far different.

Mr. Madbouly said that the ministry intends to provide the 200 families that now live in the new communities with five acres of agricultural land each—once water can be secured. He said he plans to contact the Minister of Water Resources, Hossam Moghazy, to see if he will be able to provide water to the communities for their proposed fields. He also indicated that, within three months, a large water tank with a capacity of 1,000 cubic meters, will be provided.

The minister promised that handicraft industries and shops will also be established in the valley. Speaking to a number of Nubians during his tour of the project, the Minister said, “there must be ongoing sessions between us, in order to fulfil your needs.”