Opaletswe, a young San man, tells Daniel Koehler at New Xade that even though he is poor, “when you dance, you feel like you are very rich.” Koehler has posted three new entries to his blog about the G/wi and the G//ana people living in New Xade, the resettlement community in western Botswana where he is producing a documentary film as part of a Fulbright-National Geographic fellowship. 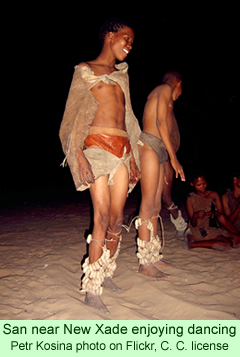 His three earlier blog posts described his first impressions of the San people from November through January. To supplement them, he described, on January 28, the happiness of his new friend when he is dancing. Koehler related his conversations with Opaletswe, one of the few young men who holds a job—in his case, as a community liaison for the local police force. The work is not terribly fulfilling, Opaletswe tells Koehler, nor does it pay very much. But at least he is employed.

Before he got his job with the police, he was employed by a lodge where tourists went to experience the “authentic” culture of the San at a cultural village. But he wondered, in his conversations with Koehler, why his community shouldn’t develop their own cultural village. Others whom Koehler met expressed similar desires—to foster their own tourism ventures, as musicians, as crafts persons, perhaps as language tutors.

Opaletswe’s specialty, though, is dancing. He hummed to himself and danced a step or two whenever he walked around the village with the author. But Koehler asks critical questions: the dances the San used to perform had deeply spiritual meanings. But now, are they much more than just entertainments for tourists? Do such performances help keep the old culture alive, or do they help deprive their traditions of any meaning? Koehler’s filming project appears to be exploring in depth astute questions such as these.

His blog post of February 25 describes the challenges and rewards of trying to prepare a documentary film about a community in a foreign land. He doesn’t minimize the difficulties. Many journalists have dropped into New Xade, stayed a day or two, and quickly left. The results of their visits have rarely been sent back to the community. Koehler intends to treat the people differently.

The most important thing to achieve, he writes, is a sense of trust between himself and the people he is trying to film. He may spend a week hanging out with people in order to gain their confidence and support, which will make another week of filming and interviewing much more rewarding than if he had just filmed for two weeks. He has been completely transparent about what he is doing with everyone that he contacts. Building effective relationships is essential, he believes.

His goal is not just to produce his own film. Rather, he sees the project as a collaborative one. He wants it to empower the community so the San people can tell their own story in partnership with him. He intends to present the resulting film at screenings in New Xade as well as elsewhere in Botswana. Koehler has yet to mention John Marshall, the late filmmaker who pioneered in making films about the San 60 years ago.

His most recent blog entry, posted on March 28, projects a more downcast mood. Koehler describes helping a dozen people dig a grave in the New Xade cemetery. Somehow, while digging down a couple meters with the others, he threw out his back. At least temporarily, he had to abandon his shoulder-carried camera and use his tripod to conduct interviews.

Older people who had been initially reluctant to talk about their past lives out in the Central Kalahari Game Reserve changed their minds about him. “The white man works hard,” they said in appreciation for his honest efforts to help, to fit in. As a result, he found the interviewees to be incredibly honest about their former lifestyle, which many of them dearly miss. They recalled how they, or their parents, had gathered wild foods in the desert, or hunted small antelopes.

They related their pride when they visited the desert pans—which their own ancestors had named. But Koehler sensed a bitterness in their voices when they told him, “now, we are looking for life.” This search for identity, expressed by his friends and contacts in New Xade, will be the theme of the film, which now has a working title, “Looking for Life.”

While very few of the younger people express any desire to live in the desert again, they do feel quite uneasy—they act as if something is missing in their lives. They are searching for a way to reinvent their society, Koehler argues, in such a way that they will be able to take charge of their own futures.