Piita Irniq argues that the best way to overcome a tendency toward violence in young Inuit males is for other men to help them reconnect with their cultural history. As an example, he told Sarah Rogers, a reporter for Nunatsiaq Online last week, “I’d like to see men making small qamutiit [sleds] for babies and children to be pulled in, so we can take back the respect men always had in the community.” 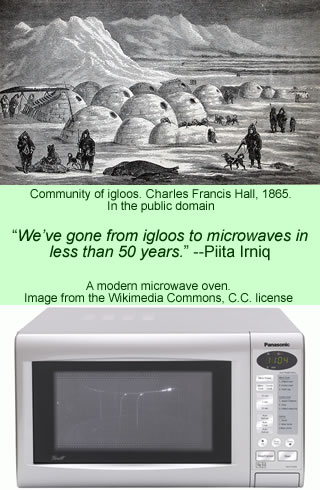 The reporter focuses her story on the basic concept of men helping other men. She describes several organizations in Inuit communities of northern Canada where men’s groups are trying to make a difference. Mr. Irniq, who is a former politician from Nunavut as well as an advocate for Inuit culture, argues that the rapid pace of change has overwhelmed the people. He reasons, “we’ve gone from igloos to microwaves in less than 50 years,” so it is hard for individuals to cope alone. Hence, the need for associations to promote healthy activities.

Several incidents of violence have captured news headlines. Lengthy armed standoffs in Iqaluit spanning several days shut down neighborhoods; desperate armed men barricaded themselves in houses in other Inuit communities. In not much more than a month this spring, on at least five different occasions, armed men confronted the police. These incidents appear to be caused by young men—much more than by young women—who struggle with personal issues that they can’t resolve.

Mr. Irniq and other leaders realize that it is essential to reach out to the troubled young men. Irniq focuses on the traditional culture of the Inuit. He goes into communities or prisons and attempts to teach what he refers to as “traditional tools,” skills that men can pick up and use to help their families.

Unaaq, a men’s association in the town of Inukjuak, in northern Quebec, got started because community leaders realized something had to be done to deal with the addictions, suicides, traumas, and violence of the young men. Tommy Palliser, a founding member of Unaaq, feels that his group has had a positive impact by holding discussion forums, organizing workshops, and teaching traditional skills.

While Unaaq has an open membership, it focuses on men between the ages of 15 and 35. Palliser tells Ms. Rogers that most of the harmful incidents in their community are caused by young men of that age. They are on welfare, have little education, and simply do not have much to do. A youth late one night last month was shot and killed when he attempted to enter the police station armed with a knife. A 24-year old man held his family hostage for two days before killing himself with his gun. Unaaq tries to prevent these sorts of incidents with its programs.

Palliser says that one of its primary goals is to keep the young men busy. It is trying to develop technical training programs in the community in order to help men get better jobs. Some of them are working as drivers of water trucks, or as janitors, but that sort of work can be repetitive and boring for the men. A lot of them, he says, would like to get more education, but that poses a challenge.

In Rankin Inlet, a Nunavut community on the other side of Hudson Bay, Noel Kaludjak has helped develop a men’s support group called Angutiit Makgiangninga—Men Rising Up. According to Kaludjak, who has, himself, been healing from his past, the name of the group means that the men are “getting up from abuse, anger, alcohol—all the pain from our hearts.”

Mr. Kaludjak says that anyone is welcome to join the informal network, but they do find that if a woman is present, the men have a harder time speaking frankly about their problems. “When we sit together, we understand what the other one is going through,” he says.

Kaludjak blames the recent, well-publicized incidents of violence on people who come from insecure backgrounds. He says his group is attempting to help men become better able to connect with their wives and to raise their children more effectively.

While the journalist does not refer to Jean Briggs’ descriptions of the traditional Inuit ways of controlling anger and helping prevent violence, the essence of the news story is that Inuit leaders understand that they must proactively attempt to rebuild traditions of their culture that helped control violence in the past.