The showdown began at 7:45 AM on Friday, November 19, 1965, when a school bus pulled out of Oelwein, a city in northeastern Iowa, headed for the Old Order Amish settlement a few miles away. The Amish had established two of their own schools, staffed by uncertified teachers, a violation of Iowa law at the time. 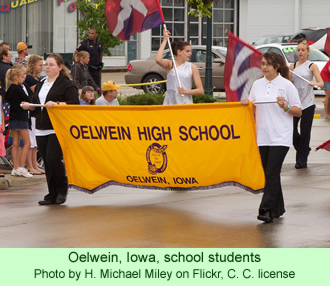 Amish parents were determined to prevent their children from being exposed to the values of the larger society in the new, consolidated schools. After extensive negotiations had failed, the district superintendent, Arthur Sensor, was determined to settle the matter once and for all by going out to get the kids in a school bus and take them to school himself.

The Amish knew the English were coming, and they were determined to use nonresistance to thwart any sneak attack. The Des Moines Register last week carefully reviewed the situation that developed that April day nearly 50 years ago at the Amish school, a crisis that precipitated headlines nationwide.

However, an even more detailed account was provided by Erickson (1969), though the facts provided in the two descriptions are essentially the same. The story is a good example of the ways the Amish practice nonresistance. The bus stopped at the much smaller city of Hazleton, just south of Oelwein, to pick up the principal of the Hazleton Elementary School, Owen Snively. Mr. Snively, who had just been appointed temporary truant officer, had built up a good rapport with the Amish people. He joined Sensor and a school nurse on the bus.

Their plan was to try and persuade the Amish children to ride the bus back to the Hazleton Elementary School. The bus stopped at one Amish farm after another, trying to find children. At each stop, Snively told the parents that he was acting under the authority of Iowa’s truancy statute and he was there to take their children to the Hazleton School. The parents denied that their kids were around, without admitting that they were either hiding in the woods or somewhere else on the farm. The bus driver reported he had seen Christ Raber’s children peeking through a doorway while Mr. Raber was denying that his kids were at home.

Finally, the driver turned the empty bus toward what was called the South School, where many of the Amish children had, in fact, already gone. When it pulled into the school yard, Mr. Sensor counted 17 carloads of sightseers and news reporters waiting for the drama to begin. Many Amish fathers and mothers were also there as well as Fred Beier, the county sheriff, plus the county attorney and the deputy sheriff.

They all entered the school and Snively told everyone why they were there. He asked the children to be good and assured them that he was their friend. He promised them they would all be warmly welcomed in Hazleton. He asked them to line up behind Sheriff Beier, who would lead them out to the bus. Most were outside the school in the line walking slowly toward the bus when someone—one of the mothers or perhaps the teacher—hollered “run” in German.

The kids all took off. They scrambled over, under and through a barbed wire fence at the back of the schoolyard, dashed out into a cornfield, and disappeared into a woods. One fat kid, 13 year old Emmanuel Borntreger, ran right into the arms of the deputy sheriff, who escorted his weeping prey to the bus. A little six year old, Sara Schmucker, got confused and dissolved in tears not too far into the cornfield. Superintendent Sensor caught her. He took her to one of the parked cars to try and calm her down.

Photographs of Amish children leaping the barbed wire fence made the national news that night. A photographer mentioned to Mr. Snively that some children were hiding in the classroom—he said he had seen them peering out the windows. He then snapped a picture of Snively standing on his tiptoes peering into the school. Other photos showed the county attorney stalking along the fence searching for his quarry, a girl looking back in terror as she ran, the captured fat kid being led by two husky men toward the bus, and the teacher wiping tears off her face as her pupils fled.

The men decided to return the two captives, Emmanuel and Sara, to the school and leave. They urged the adults to get the children back inside—it was a cold day—and they assured everyone they would not bother them anymore. They went back to the Hazleton School, waited until the noon hour, and returned to the two Amish schools. The parents and news media had all left by then and the children, of course, offered no resistance.

The officials, having learned their lesson, took the kids one by one out to the school bus and finally away to the Hazleton School for the afternoon. Everything went well. The school provided cookies and milk, the other children helped host the newcomers, and the teacher gave them books and materials. Some of the children were clearly shaken—they had been forced to disobey their parents—but others seemed to view it all as a big adventure. They joked and sang on the bus on the way home.

By Monday morning, the Amish were prepared for trouble—sort of. When the bus drove into the schoolyard of the North School, chaos broke out. Stern-faced Amish men stood around outside, women wept inside, and children screamed when the grim looking officials pushed their way into the schoolroom. The teacher led the children in half-hysterical choruses of “Jesus Loves Me.” Mothers protectively embraced their children, girls huddled in a corner and wept, and a schoolboy clung screaming to his desk when the truant officer attempted to pry him off.

The flashbulbs from the news photographers kept popping until the school officials finally gave up and retreated outside. Sensor, Beier, and the County Attorney all took a plane to the state capital, Des Moines, to discuss the situation with the governor.

Across the nation, public opinion condemned the Iowa school bus kidnappings. The issue of whether a minority group had the right to preserve its traditions by educating its children in its own way was not settled in the press, but almost everyone agreed that the kids were innocent. They should be left alone.

However, while their plight made an impact on the nation, local public opinion in Hazleton remained anti-Amish, according to Erickson (1969). Hostility there was stronger than in many other Iowa communities in the mid-1960s that had nearby Amish settlements. Several legionnaires in town resented the fact that the Amish had not fought in recent wars. A few people, who had lost family members in battle, seemed to blame the deaths on the Amish

The Des Moines Register, in its story last week, interviewed former superintendent Arthur Sensor, who is now 94. He expressed deep regrets that he had followed the laws of the state of Iowa at the time. If he could do it all over again, he said, he would resign his position rather than attempt to compel the Amish kids to do what their parents did not want them to do. Amish people interviewed by the paper indicated that the incident is not discussed much in their community.

The drama those two days resulted in popular support for greater religious liberties, which produced exemptions to the Iowa school laws for the Amish that remain in effect to this day. But the events of November 1965 are more significant even than that.

Fifty years ago, and to this day, the Amish would never compromise on the perpetuation of their religious and cultural values. They reacted to the oppressive attempts by the majority society to control their children with their own approaches to expressive nonresistance. They protested. They ran. They hid. They lied. They made lots of noise. But they didn’t give in. They did not just talk about nonresistance—they practiced it, actively, passionately, perhaps deceptively, and almost forcefully. They demonstrated that nonresistance, at least in their society, can be an active way of living rather than just a passive phenomenon.