The Zapotec living in the mountains north of Oaxaca City had a violent history in the late 19th and early 20th centuries, a subject that a recent journal article carefully explores. Patrick J. McNamara writes an essay about the local people fighting against the outside forces of industrial owners, whose practices threatened the lives of the workers. 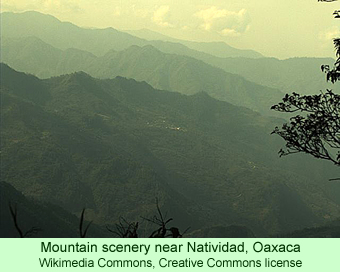 McNamara argues that much of that violent history is hidden, and mostly unacknowledged, by the Zapotec people themselves. The author focuses on two sites in the mountainous Ixtlán District, of Mexico’s Oaxaca State, places that prod his analysis of the violence: the large ruins of a textile factory and a small mining museum in another community.

He starts by discussing a modest museum located right next to a gold mine in the town of Natividad, which he visited as part of a research project. As he wandered about the town taking pictures of the gold mining operations, he met a man named Arrón Cruz, a member of the town council, who was quite helpful and friendly toward him. Sr. Cruz offered to show him the new mining museum that had opened just a year earlier.

A young woman who was in charge of the museum that day deferred to Cruz, who gave the author a personal tour. The official initially said that photographs were not allowed in the museum, but when the author started talking knowledgeably about the history of the mine, he softened and allowed McNamara to take as many pictures as he wished.

The displays at the Museo Comunitaria Minerero de Natividad, located quite near the actual mine, included old photographs, maps, old lamps, pieces of machinery, hard hats, and material on the miner’s union. It included a walk-through model of a mineshaft, the dug-out tree trunks that the miners used for ladders, a grinding stone called la rastra, and a display showing the processing of ore in order to extract gold.

McNamara writes that the museum represents an attempt by the community and the workers to tell their own story—not of peasants tilling the land, but of people doing industrial labor. It includes mostly objects, with few documents and letters on display. Most critically, it avoids telling the story of the conflicts that occurred at the mine. It does not mention the confrontation between the miners and the owners over their rights to take ore for their own processing at home. It doesn’t describe the tensions when the owners installed an electric fence to keep out the workers. It ignores the fact that the workers burned down the company store.

The author speculates that additional conflicts are possible. An international corporation is planning to expand mining in the area, a fact that Zapotec activists oppose. The museum sanitizes the history to keep the conflicts hidden.

Employment at the mine reached nearly 1,000 workers from throughout the region in the late 1920s, after the miners themselves discovered a particularly rich vein of ore which resulted in the tripling of production. However, employment at the mine since then has dropped by 90 percent.

The other industrial site the author visits is the ruins of a large textile factory in the Xía Valley. This is a site that has no official history. There is no museum, there are no guides, and, in fact, many Zapotec in the region are unaware of it. Several times, the author writes, during armed struggles in the area, one armed group or another would occupy the factory to make their last stand, the thick walls of the building offering fortress-like safety.

In fact, that is exactly what happened. A separatist movement between 1915 and 1920 came to an end when an army arrived in the Sierra to put down the rebellion. The Zapotecs occupied the huge building, which was then destroyed by the army.

McNamara builds out of his experiences at those two sites what he refers to as his own Zapotec Museum. The museum he imagines would not focus on the romanticized Zapotec past of glorious, prehistoric ruins, of the creative productions of artisans, or of peasant farmers, costumes, and dances. Instead, the museum he fantasizes about would highlight the history of industrial conflict and violence.

His museum would make the point that the mine at Natividad and the textile factory in the Xía Valley paid wages below the national average for comparable types of work. Workers at the Zapotec mine were paid one peso per day, while miners in other parts of the country were paid three. Similarly, textile workers at Xía were paid 60 centavos for men and 40 for women, far below the national average at the time of 1.25 pesos per day. A new national minimum wage passed in 1912 was denied to the textile factory workers—because they were Zapotec.

The issue, McNamara argues, was the ethnic identity of the workers. They were categorized as “Indian”, and thus not entitled to the same wages as other workers. The author lets his anger at the historical injustices shine through in his writing: “Industrial capitalism was categorically at odds with being ‘Indian.’ Wage labor became a stick to beat out ethnic identity… (p.677).”

His imaginative museum would emphasize the conflicts that roiled the history of the mine and the textile factory. He points out that more miners have died at Natividad than at any other mine in Mexico. In contrast to the happy workers displayed in the exhibits at the real museum, the miners in his imagination would be depicted as tired, dirty, and somber. A museum at the textile ruins would show worker unrest and riots, people suffering and abused, yet able to survive on very low wages.

In the end, he recognizes, his museum would not be what the Zapotec of Natividad and in the Xía Valley wish to display. They want more of a sunny history, one that shows their ancestors surviving harsh working conditions, triumphing over adversity. They really want to “emphasize cooperation between owners and workers, a moment of economic prosperity or at least economic possibility,” he concludes (p.678).