The Global Peace Index for 2015, which evaluates several measures indicating the peacefulness of 162 countries, was released by the Institute for Economics and Peace on June 17. The 117 page report is available as a PDF on the website of the Institute. 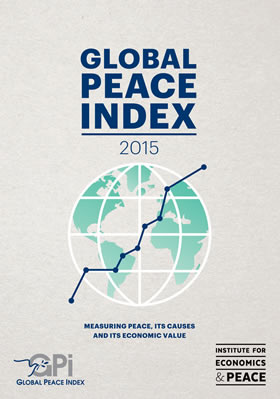 While the GPI surveys the peacefulness of nation states rather than peaceful societies, the two are certainly allied concepts so it is worth ruminating about the latest in their series of annual reports. It is quickly clear that the current document does not just use reliable quantified data to evaluate the commitment to peacefulness by countries. It also summarizes the data and draws a variety of conclusions about global and regional trends. It is well worth a careful perusal.

For instance, it reports that over the past eight years, the average score for all nations covered by the reports has deteriorated slightly. In essence, the world has become, overall, a slightly less peaceful place. The Middle East and North Africa region, not surprisingly, has declined significantly over the time period—think Islamic State, Syria, and Libya. While the record of violence in 86 countries has risen over the eight-year time span, 76 others have become more peaceful.

Dipping around in the report turns up some interesting surprises. One is that Norway has dropped from its 6th place in 2014 to 17th place in 2015. Norway had been number 5, 6 or 7 in the annual rankings since 2008. It is still among the top group in the entire survey, but the reason for the drop is curious. Norway is becoming an important supplier of advanced military hardware to other nations.

According to the report, “Norway, a country better known for its support of global humanitarian and peacebuilding efforts, has also had an increase in its militarization score. The increase has been driven by exports of air defense systems, ships and advanced weaponry (p.40).” Table 19 in the 2015 report, which follows that grim statement, ranks the “Ten Countries with the Most Significant Deterioration in Militarization Scores, 2008-2015.” Norway is third from the worst, just behind Chad and Syria, and worse than Afghanistan and Iraq.

Norway is famed for its annual Nobel Peace Prize awards, its championing of peace processes, and its relative absence of internal violence (Bonta 2013). However, the amount of crime in the country, as well as the murder rate, is rising. Of more interest than statistics are the attitudes of the Norwegians toward conflicts and violence. They avoid having close social relations with their neighbors in order to minimize the possibility of confrontations.

The Norwegians are intensely opposed to violence and crime. They constantly discuss and protest violence in their country, and while their rate of violence may be increasing, they still treasure the peacefulness in their country. Be that as it may, if the GPI is correct, they also appear to have a cynical attitude toward selling advanced weapons to other parts of the world.

Searching through the Google News Index and dipping into scores of news stories about the current GPI shows that people, or at least the media, in many countries worldwide take the rankings seriously. Many of the news stories report that Iceland ranked first this year, that the United States ranked in 94th place (up from 101 in 2014), and so forth. A few reports provide some interesting additional comments.

One news report quotes Matt Wuerkler, an editorial cartoonist for Politico, as saying about the current GPI that journalists typically cover exciting violence rather than dull peacefulness. They are to blame for striving to appeal to ever-larger audiences who are attracted to violent events. He suggested, in a forum held upon the release of the GPI, that the focus on violence by the media harms everyone since it reinforces stereotypes that the way to control conflicts is through violent means.

The same forum also included former US Ambassador Rick Barton, who commented on what he referred to as the “silent majority” epidemic. Most people worldwide crave peace and oppose violence, he suggested, but they seem to accept the solutions advocated by their governments, of solving conflicts with warfare. He encouraged people to search for nonviolent means of solving conflicts and increasing peacefulness.