The opening paragraph in a recent journal article by Piriya Pholphirul about Thailand begins with the amazingly hopeful statement that “‘happiness’ is the ultimate human desire.” Skeptical readers, living in societies that place their highest values on wealth, power, position, or status, might well question such an assertion. 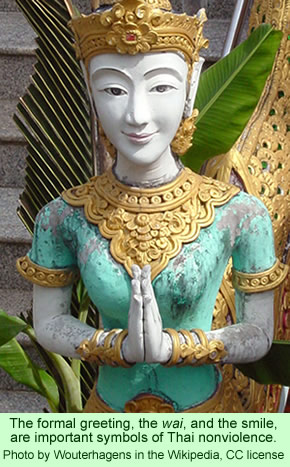 A Wikipedia article, the “Culture of Thailand,” explains that the formal Thai greeting, called the wai, is “often accompanied by a serene smile symbolizing a welcoming disposition and a pleasant attitude.” The article continues that “Thailand is often referred to as the ‘land of smiles’ in tourist brochures.” As part of their culture of serenity and happiness, the Thai people strongly discourage displays of conflict and anger.

But are there differences between the Rural Thai and the Urban Thai regarding this issue? Professor Pholphirul, from the International College of the National Institute of Development Administration in Bangkok, investigated the topic in his research. The thrust of his article is to analyze the happiness of the Thai people in various social, economic, and health circumstances, with a particular focus on whether the respondents live in rural or urban settings.

In order to investigate the topic, he obtained data referred to as a “Happiness Indicator” out of a study titled “The Development and Testing of the New Version of Thai Mental Health Indicator.” The study was conducted by the Department of Mental Health, Ministry of Public Health.

The data for his study were obtained by using the Thai Mental Health Indicator Questionnaire with a representative sample of Thai people in all urban and rural areas of Thailand, among people from 15 to 60 years of age. Samples were taken from high, moderate, and low income areas. A total of 2,402 samples were gathered, about 480 from each of the five regions of the nation. Of the total samples, 690 were from people living in urban areas and the rest from rural respondents.

Not surprisingly, people living in urban areas reported higher levels of education than the Rural Thai people. Also not a surprise is the fact that people living in the cities earned more than those living in the country. The urban people earned an average of 6,512 Baht (roughly $217) per month compared to 5,589 Baht (about $186) for rural earners.

The author indicates that the urban dwellers, on average, reported more health problems than the Rural Thai. Pholphirul divides health problems reported by survey respondents into chronic conditions and common ailments (colds, sore throats, headaches) suffered one month before the interviews. The urban residents had only slightly more chronic illnesses overall than the rural residents, 19 percent compared to 18 percent, but a significantly higher percentage of common illness than their rural brethren, 28 percent compared to 24 percent.

Another scale the author prepared was of what he calls “Life Satisfaction.” While the data show that the overall results for Urban Thai and Rural Thai are very close, significantly more rural people than urban people reported they were extremely satisfied with life (10 percent compared to 6 percent) and, at the other end of the scale, more urban residents said they were extremely dissatisfied with life (3 percent compared to 2 percent). Pholphirul argues that life satisfaction is a factor that affects happiness.

Summarizing the entire survey, the author concludes that more Thai people report they are happy than unhappy, and that overall the rural people are happier than the urban people. Also, the regions with the greatest densities of urban areas—the Central Region and the Eastern Region—have lower levels of happiness than the more rural North and Northeast regions.

Prof. Pholphirul adds that despite the benefits of urban life, such as more choices for consumers, greater chances for jobs, better opportunities for education, and more conveniences, urban Thai people are more likely to have to confront mental and physical issues than rural people. The country people, on the other hand, may well emphasize that their rural ways value “generosity and a non-competitive environment (p.984).”

Another suggestion Pholphirul makes is that the more competitive urban environment may well result in couples having less time to spend with one another. So divorce rates may increase in urban areas, causing city people to derive less pleasure from life in the future.

Fifty years ago, Phillips (1965) probed what he refered to (p. 54) as the “happy characteristics” of the Rural Thai: regular good humor, friendliness, affability, and interpersonal gentleness. He added that their conversations were often marked by nervous giggling and frequent discussions of unimportant subjects while they attempted to determine what others were thinking and to fulfill the minimal amount of interpersonal contact. They desired to make good impressions on others through their good manners, flattering comments, and excessive politeness. Their relationships were pleasant and jocular, fun though not necessarily socially significant, for a good reason, he concluded: they want to “avoid face-to-face conflict!” (p.54)

While Bang Chan itself, where Phillips did his research, is now a suburb of Bangkok, and conditions there are changed, outsiders can gather from the current study that the more rural areas of the country still value their traditional culture. Outsiders can hope that scholars like Pholphirul will continue to investigate issues that Phillips raised in his pioneering work 50 years ago.

Pholphirul, Piriya. 2014. “Healthier and Happier? The Urban-Rural Divide in Thailand.” Journal of Human Behavior in the Social Environment 2(8): 973-985.