The racism that Nubians in Egypt sometimes experience from the Arab majority in their country was dramatized last week in a widely publicized incident involving a popular soccer (football) star. The incident exemplifies the bigotry that the Nubian writer Idris Ali wrote about in a major novel, which was the subject of a review here just three weeks ago.

The racism captured the attention of Nubians and news commentators in Egypt. It started when an outspoken Nubian soccer player named Ahmed El-Merghany condemned a military battle two weeks ago, fought between the Egyptian army and Islamic State militants in North Sinai. According to news reports, the army killed over 100 militants in the battle, but numerous Egyptian soldiers died also.

El-Merghany had the temerity to express his personal opinion about the situation on his Facebook page, on which he described the President of Egypt, Abdel-Fattah El-Sisi, as a failure. El-Merghany plays as a midfielder for the soccer team Wadi Degla—or at least he did. He had played for another team, called Zamalek, chaired by a man named Mortada Mansour, until 2013 when he left and joined Wadi Degla. 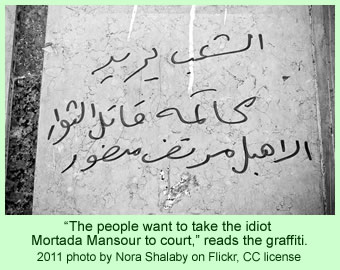 Shortly after he published his critical comments, in Arabic on Facebook, the chairman of Zamalek, Mr. Mansour, an outspoken lawyer who had, himself, announced last year that he was running for president and then soon withdrew, leveled a blast at El-Merghany for expressing critical opinions about the government. Among other things, Mansour called El-Merghany a “bawab”, a racist term that refers to his dark skin complexion and suggests that he is nothing but a doorman—a low-status job that many Nubians do, in fact, hold.

In response to that racist taunt, the General Nubian Union, which seeks to promote the interests of Nubians, condemned Mansour’s comments. The Union quickly announced that it was going to sue Mansour “for inciting hatred and discriminating against a group of the [Egyptian] society with the intention of disdaining them,” it said on its Facebook page.

The Union added, “his racist remarks saw him insult the player and the Nubians by telling him ‘you are a doorman and servant’, also disdaining a respectable profession which has been the job of many Nubians over the past decades. We [have gotten] used to such rotten comments from Mansour against any person who disagrees with him or the authorities.”

Wadi Degla, for its part, announced that Mr. El-Merghany had been put on leave. The team emphasized in its announcement that it was against their rules for players to make comments about politics. “We have been against mixing politics with sport since 2012,” the club said. It has suspended him for the rest of the season.

The club did condemn Mansour’s racist remarks, however. It said it “denounces the insults subjected recently to the player who is responsible for the whole situation.” But the club was defensive about “offloading” the star player. They did it, not because he had criticized the president, but because he had spoken out about politics.

Another news report quoted the team as saying, “Wadi Degla put[s] emphasis on our respect for freedom of speech which is provided by our constitution, however, we strongly reject expressing any political view by any employee.” Wadi Degla is in eighth place in the Egyptian soccer league and Zamalek is in the lead.