Accusing, and even killing, others because they are supposedly witches is a widespread plague in Africa, particularly in Tanzania. Many people in the homeland of the Fipa people—the Sumbawanga District in the Rukwa Region of that nation—claim the magical powers of witchcraft. 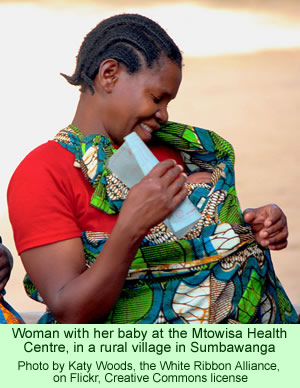 Sometimes those supposed magical powers are used for beneficial purposes, proponents argue—to cure illnesses, to call up the spirits of dead people, or to prevent accidents on the roads. But at other times the magic is thought to be used for evil reasons, such as causing diseases, harming others, or killing people and animals. These practices are dramatically at odds with the positive health advances and welcoming ceremonies held for newborn babies at a Fipa village in the Rukwa Region, as described by a news story in 2014. Both stories need to be told.

Hamisi Mathias Machangu, the author of a recent journal article on killing accused witches among the Fipa, defines witchcraft as “any influence of an individual possessing magical power on another person’s mind, body or property against his or her will (p.274-275).” He considers witchcraft to be distinct from magical powers in general. Machangu is an assistant lecturer in the History Department at the University of Dar es Salaam.

Accusations of elderly women as witches is a serious, but tragically common, practice in Tanzania. Many elderly women are killed as a result of their supposed witchcraft, and the crime seems to be growing worse. Between 1970 and 1980, 3,693 people were killed in Tanzania because they were suspected witches. In the decade of the 1990s, that figure rose to 23,000 deaths, of whom 80 percent of the victims were women.

The Sumbawanga District of the Rukwa Region, the heartland of the Fipa people, ranks among the top five areas within the nation for the witchcraft killings of elderly women. The very name Sumbawanga translates as “throw away your witchcraft,” from “sumba,” to throw and “wanga,” witchcraft. The name was perhaps derived from a warning in an earlier era to spiritual healers from other regions that they should avoid migrating into Fipa territory.

The thrust of Machangu’s work has been to investigate the reasons for this growing problem. One issue the author examines is the way the authority of the traditional chiefs was severely weakened during the colonial period and after independence. Traditionally, the chiefs organized the people and kept their social and economic activities functioning effectively.

During the pre-colonial period, accusations of witchcraft were rare. The people lived in sparsely settled, economically self-sufficient, farming communities. The Fipa in that period thought that quarrels between villagers, issues which threatened the harmony in society, might result in misfortunes and epidemics. They believed that the chiefs had the ability to settle conflicts with their magical powers. As a result of this perceived stability, crops and animals thrived and no epidemics threatened their communities—or so they believed.

However, this controlling order was disturbed by the British in 1926 when they imposed a system of indirect rule over the colony that minimized the roles of the chiefs. Tanzania gained its independence in 1961, and in 1963 the new government permanently removed the chiefs from their offices. They no longer had any power.

Furthermore, the national government did not implement policies to improve agriculture in Sumbawanga. Instead, new economic constraints, combined with natural increases in population, caused living conditions to become worse. Food shortages increased and famines occurred frequently. Also, since independence Fipa farmers have had problems using fertilizers, working with improved seeds, and controlling pest infestations and diseases. In essence, they were maladapted to the capitalist agricultural system imposed from above. These issues fostered poverty and of course the traditional chiefs were no longer able to intervene.

The author maintains that the economic decline prompted suspicions that the increasing problems—diseases, pests, droughts, and famines—were caused by the efforts of poor, elderly women. The old women must be jealous of the successes of the others, some people seemed to think, so they caused the misfortunes. They must be witches. The author maintains that there has been a direct relationship between increased poverty in Sumbawanga and accusations of witchcraft against elderly Fipa women. The chiefs could no longer bring rain and end epidemics.

Furthermore, instead of addressing issues of gender inequality in the district, the government has promoted male domination over females. Ever since the colonial era, males were given educational privileges that were denied to females. This trend continued after independence—girls could not have much education, so women have remained poor and ignorant. Again, this trend has fostered the witchcraft accusations.

The author identifies still another issue. Government policies instituted in 1967 fostered the concentration of people in Sumbawanga from scattered, isolated hamlets into newly created, more concentrated villages. This movement of people involved other ethnic groups as well as the Fipa who were concentrating in the centralized villages. This redistribution of the population in the new settlements, with their greater numbers of people, produced serious social disruptions: anti-social behaviors such as adultery, thefts, and violence, all of which fostered tensions. These tensions contributed to the increased wave of witchcraft killings.

Machangu also writes that the Tanzanian Local Customary Law of 2002 denied widows the right to inherit property from their husbands. As a result, disputes over property inheritances became rife, and the conflicts led to the killing of elderly women, in part in order to grab properties the women might have inherited from their deceased husbands.

Tanzanians are attempting to deal with this problem. The government has passed laws, such as a Witchcraft Ordinance enacted in 1928, which provided imprisonment and fines for the killing of suspected witches. A 2002 Witchcraft Act added to the amounts of the fines.

Various social groups campaign to eliminate the witchcraft killings: they seek to find and protect elderly women in Sumbawanga who are experiencing social exclusion and prejudice. Religious leaders condemn the practice in their mosques and churches. Some NGOs are working to stem the problem by trying to improve the quality of life for the poor and the elderly in the district. However, Machangu does not suggest that the problem is getting any better.