Last week the daily blog of Asymptote, a prominent online literary and translation journal, featured the work of a major contemporary Zapotec poet named Irma Pineda. Ms. Pineda, along with other poets in her community, is at the forefront of articulating cultural values to the Zapotec people. 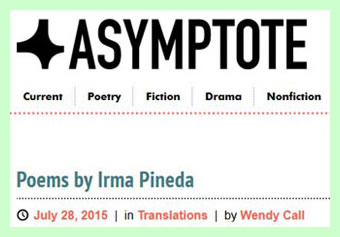 Pineda was born and raised in Juchitán, a Zapotec city in the Mexican state of Oaxaca. Her father, an activist working for Zapotec autonomy, was murdered while she was a girl. She studied and worked for a while in Toluca and Mexico City, in Central Mexico, but then she returned to her home town. Her first language is Zapotec, much like most of the other residents of the city.

The poet writes her works in Zapotec, then “recreates” them in Spanish. She does not refer to the Spanish language versions as “translations” because, she says, she thinks of them as parallel poems—“a poem created in our language and another poem in Spanish.” She feels that creating two different versions upholds the literary traditions of both cultures.

As of 2011, Pineda had published five collections of her poems, one of which enjoyed a print run of over 90,000 copies. She published her sixth book of bilingual Zapotec/Spanish poetry, Guie’ ni zinebe / La Flor de Se Llevó, in 2013. She is a faculty member at the National Teachers University in Ixtepec, Oaxaca, and serves as a member of the Sistema Nacional de Creadores de Arte of Mexico. She has been the only woman to serve as president of the Escritores en Lenguas Indigenas (ELIAC) of Mexico, an organization of Mexicans who write in indigenous languages.

Her translator into English, for both the Asymptote article last week and for several earlier publications, has been Wendy Call, a faculty member of Pacific Lutheran University in Tacoma, Washington. Her translations of Pineda’s poetry have appeared in Orion, Michigan Quarterly Review, Kenyon Review online, Cincinnati Review and others.

Asymptote was described by Publisher’s Weekly in 2011, shortly after it began publication, as an online journal that publishes original fiction, poetry, nonfiction, drama, criticism, and interviews. The journal seeks out writers who have not yet been published in English and it finds translators to translate them.

How does Zapotec poetry relate to the broader culture of that society? Some background on the Zapotec city of Juchitán is necessary. A local group, the Coalition of Workers, Peasants, and Students of the Isthmus (in Spanish, Coalición Obrera, Campesian, Esudiantil del Istmo, COCEI), founded in Juchitán in the 1970s to support workers’ rights and agrarian reform, was able to win municipal elections in the city of about 75,000 in 1981.

However, the ruling political party in Mexico and Oaxaca State at the time was deeply challenged by the Juchitán city council. Years of strife persisted between the popularly supported social and economic programs of the local political movement and the higher levels of authority in the state and nation.

Clare Sullivan, who specializes in translating Mexican poetry and teaches at the University of Louisville, writes that the poets in the city have been important actors in the local drama, for poetry is an especially important aspect of the culture and society of Juchitán. When the COCEI party overthrew the entrenched power structure in 1981, Sullivan (2012) argues (p.45), “this victory belong[ed] to poetry as well as politics.” Her reasoning is that the poets of the city “entrance” readers with their verses, remind people of their identity by “reimagining local traditions,” and urge the citizens to take charge of their own culture, language, and future.

One of the outstanding features of the Zapotec poets, Sullivan continues, is that through their effective use of language, they combine the issues involving humanity with a care for the natural world. The threats that the environment face are addressed by the Juchitán poets, including Pineda. For instance, the scholar writes, Pineda has described the human destruction of the sea in powerful language, which she quotes in her own English translation:

In her article, Sullivan (2012) describes the influence of several contemporary Zapotec poets—Natalia Toledo, Victor Terán and of course Pineda—and writes that they frequently produce works that serve as an example for others and provide hope for indigenous cultures and languages around the world.

World Literature Today, which published the Sullivan article over three years ago, still includes on its website multi-lingual recordings of readings (including English translations) of the Zapotec poets she discusses in her piece. Pineda’s poem “You Will Not See Me Die,” read effectively in English by Wendy Call, is an immensely powerful statement of the strength and endurance of Zapotec society and culture: “we will be strong, we will always survive, our song will live forever….” Pineda reads the Zapotec and Spanish versions. Numerous videos and recordings of Pineda reading other works are also available on YouTube.

The English, Spanish, and Zapotec language versions of a number of Pineda’s poems can be read on the Web. The Asymptote article last week includes the text of her poem “Love / my belly is now a dry tree / that once wanted to bloom stars for your nights.” An entry in Wendy Call’s blog in 2011 published Pineda’s poem “Light.” Eleven Eleven, a literary journal, published her poems “The Wall,” “Siren,” “The Guest,” and “from The House of Origin to the Nine Handspans.”