Every year on August 9, people in many countries organize events to celebrate the International Day of the World’s Indigenous Peoples. Ekta Parishad, an organization in India’s Tamil Nadu state, convened a celebration in the city of Madurai on Monday the 10th that included Paliyan and Kadar people from the Anaimalai Hills of Tamil Nadu and Kerala, plus individuals from some other Adivasi societies. They participated in a variety of cultural programs as a way of celebrating the special day. 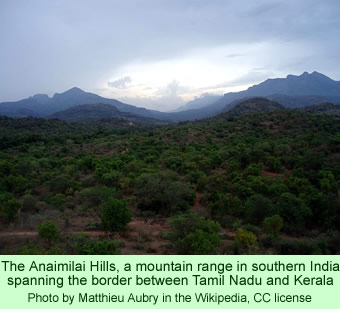 Both The Hindu and the Times of India reported that the major attraction of the event was the singing and dancing of the Paliyan and the Kadar participants. About 100 students from a local institution, the Lady Doak College, participated along with about 20 tribal people. S. Thanaraj, the coordinator of Ekta Parishad, commented that many developments have changed the way of life of people such as the Paliyans and the Kadar, but the point of the program that day was to highlight their traditional dances and songs, as well as to present some of their poetry.

The Times of India reporter quoted a social science student from the college named C. Sugirtha who said that it was important for the tribal people to be recognized in the broader society, which ought to acknowledge their needs. Another student noted the importance to the tribal people themselves of identifying with their own cultures and traditions.

D. Radha, a Kadar woman, told The Hindu that the dance her group was presenting was performed on both sad and happy occasions in their village. She said that the song had been written in their language and had been known by them for generations.

Another Kadar, R. Ravi, told the paper that many of their customs, practices, and traditions were vanishing. He said that the Kadar used to get most of their daily food from their gathering in the forest, but recently they have adopted small-scale farming, which has led to changes in their diets and made them more susceptible to diseases.

Thangaraj, a Paliyan man from Madurai, said that many of his people had become ignorant of their own cultural traditions due to changes made by decision-makers in the majority society. As an example, he cited four different Paliyan settlements where regulations made by agencies such as the Forest Department have restricted entry to the forests. These restrictions have prevented the people in those communities from going up into the hills to say prayers to Palichiamman, a deity, on the appropriate days.

S. Thanaraj, the coordinator of Ekta Parishad, seconded this theme. He said that the larger Indian society needed to be aware that external developments could harm the lives of the indigenous people. “There are a lot of values and ethics of living followed by tribes which need to be taken seriously. While development has rampantly affected them, the fact that they can rejuvenate and conserve the environment in their own way has been overlooked,” Mr. Thanaraj said.

Both reporters commented on the fact that some students from the Lady Doak college got up on the stage and tried to join in with the dancing done by the Kadar, who taught them a few of the simple dance steps. The Hindu reported that the performance by the Paliyan people also received loud enthusiastic applause from the student audience.

Fortunately, a YouTube video entitled “Dance of the Paliyans” presents a four and one half minute snippet of them performing on a stage. A narrator provides an introduction in English, which is followed by an engaging, effective dance number by the Paliyan themselves. The narrator explains that while the performance we watch is obviously staged, it is normally performed around a bonfire early in the evening. A symbolic bonfire is visible at the center of the dancers on the stage as they do the dance called “Rice De-husking Lore.”

It is not clear if this particular dance number was performed by the Paliyans in Madurai last week. It is also unclear if any of the dances that Gardner (2000b, p.137-139) discussed in his book on the Paliyans were presented in Madurai. Gardner described dances, some of which were playful in nature, which were part of the rituals involved with visits of the caamis, the protective deities of the Paliyans. But it is obvious from the video, and from Gardner’s descriptions of dances he witnessed, why the college students would have been so excited that some of them would have joined in.