One of the features of Amish society that fascinates outsiders is their use of a dialect referred to as “Pennsylvania German,” which is also frequently called “Pennsylvania Dutch.” A recent journal article by Steven Hartman Keiser, a faculty member in the Department of English at Marquette University in Wisconsin, describes the background and development of Pennsylvania German. He provides an intriguing theory that some of the ways the Amish use their language serve as markers for humility, one of their key beliefs. 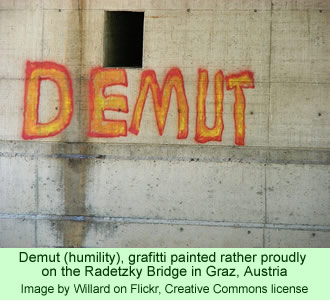 Keiser’s background information about the language is just as important as his interesting theory. He explains that Pennsylvania German (PG) was a distinct dialect that developed among the German speaking inhabitants of Pennsylvania who came from southwestern Germany in the 17th, 18th and 19th centuries. By the end of the 1800s, over 700,000 people in the central and southeastern sections of the state, including Lancaster County, spoke the dialect, only a small portion of whom were Amish or Old Order Mennonites. Many PG speakers belonged to Lutheran or Reformed church communities.

However, the situation has changed dramatically since then. Lutheran and Reformed people of Germanic origin in Pennsylvania have almost completely stopped speaking PG. At the same time, the Old Order groups—Old Order Mennonites and Amish people, almost all of whom speak PG—have rapidly multiplied due to their high birth rates. Today, the author writes, probably only a few thousand non-Old Order PG speakers remain, most of whom are quite elderly, while about 300,000 Old Order people speak Pennsylvania German much of the time.

The Old Order Mennonites and Amish speak English as well as Pennsylvania German. PG is the language of the homes and churches, while English is the language of literacy, schools, and usually of businesses. However, while there are a lot of diverse practices among the several thousand Old Order groups, that diversity has produced only minor variations in language usage patterns. PG varies primarily because of geography: Eastern PG is spoken in Pennsylvania and Midwestern PG in Ohio, Indiana and surrounding states.

The author’s major argument stems from a different angle: that the practice of humility serves as a marker for some linguistic differences, particularly the lexical borrowings of what he calls “the phonological incorporation of English loanwords.” Keiser explains his argument carefully. He points out that words borrowed from English and used by PG speakers may account for about 20 percent of their lexicon when speaking Pennsylvania German.

There are wide variations in the uses of those loan words right within the Old Order communities, even just within Pennsylvania. However, there is no clear regional marker of the extent of usage of loanwords. He points out that the literature about the extent of word borrowings is contradictory: some authorities argue that the Mennonites in Lancaster County use more English words in their PG, while other scholars are just as convinced that the Amish in that county borrow more.

The author considers these variations to be relatively minor. Of more significance, he argues, is whether PG speakers use loan words at all and how much. Most of the Old Order people are fluent in both English and Pennsylvania German, so the use of a loan word from English represents primarily a stylistic choice for the speaker.

The Amish speakers of Pennsylvania German are usually quite willing to discuss differences in the ways other Amish communities speak their language, though they are typically unwilling to evaluate those differences. When they do judge the usage of their language, it is usually in terms of a key Amish concept: Demut, humility.

For Demut pervades Amish life. The simplicity of dress, the relative absence of decorations in their homes, and the absence of pride in personal accomplishments are all evidence of a proper humility. When the linguist points out errors in their spoken language, the Amish person welcomes the information. It is simply not their way to take pride in correctly speaking or writing Pennsylvania German. But speaking PG is nonetheless symbolic of separation from the larger “English” society, a marker of nonconformity with the outside world.

Amish speakers thus are not ashamed or concerned about their borrowing of words from English, and they acknowledge that the trend is increasing. The reason is that anyone who is overly attentive to the purity of their spoken language might be perceived as being vain. Thus, for example, some Amish speakers of PG from the southern portion of Lancaster County believe that Old Order Mennonites in the northern part of the county speak Pennsylvania German more properly than they do. In saying that, they are unselfconsciously implying that they themselves may be a bit more orthodox in their humility, their Demut, than their neighbors 20 miles to the north.

Demut in essence serves to explain both the Amish retention of their native German vocabulary and its loss to English loanwords. Amish people who use the loanwords shrug off their usage as a reasonable aspect of their humility, even if that usage does serve to remind them that they are slipping a bit in maintaining a key symbol of their distinctness from the larger society. It all seems a bit contradictory.

Some people use good-natured teasing to caricature and even gently mock the speech of others in different communities. In essence, the good natured rivalry between various Old Order Amish groups is based, Keiser argues, on attempts by each community to justify and strengthen the importance of Demut among themselves. The presence of the loanwords reminds them of theirDemut. Of course, they would not consciously take pride in that aspect of their spoken language.

The author does not claim to be making an empirical proof. But his argument—that the uses of loanwords can serve as markers for the Amish perceptions of their own humility—is intriguing indeed. Old Order Amish in different areas may share common religious beliefs, but they demonstrate a lot of diversity in the ways they practice their belief in humility. Their choices of English loanwords thus serve as markers that identify their commitments to their ideals.

Several examples of spoken Pennsylvania German can be found on YouTube, but two good audio clips of spoken PG with the printed English translations provided, are on the American Languages: Our Nation’s Many Voices website from the University of Wisconsin. It is easy for non-PG speakers to follow the comments of the two Amish people because their PG phrases are interspersed with English loanwords that occur in almost every sentence. The first clip, in fact, is of a recording of an elderly non-Amish, non-Mennonite PG speaker in Pennsylvania, one of the few remaining.

The website indicates that Real Audio Player is necessary for a computer to play the clips, and it provides a link so that the player can be downloaded, but the QuickTime plug-in also works. A dark gray bar just below the description of each speaker—e.g., male Amish speaker in Franklin County, PA, or female Amish speaker in Nappanee, Indiana—needs to be clicked in order for the personal computer to link its audio player to the website in Wisconsin. It’s worth the hassle.

Keiser, Steven Hartman. 2015. “Religious Identity and the Perception of Linguistic Difference: The Case of Pennsylvania German.”Language & Communication 42 (May): 125-134