As far back as 1946, Ruth Benedict argued that the Thai culture of male dominance is based on their religious practices and on their interpretation of Buddhist doctrines (Phillips 1965). Keyes (1984) amplified those ideas by focusing specifically on Rural Thai society and on the salient fact that, in that nation, only men could become monks. 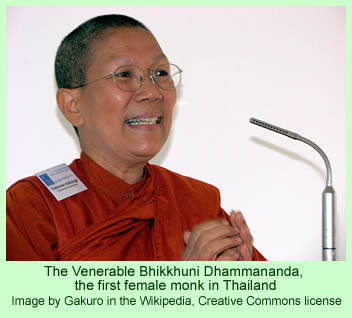 By the mid-1980s, after several decades of national economic growth, men had assumed a dominant role in many Thai businesses, such as the ownership of shops in villages and small rural towns. Keyes argued that the advances of the men could be attributed, at least in part, to the ways the Rural Thai think of male/female gender roles. The culture of Thailand distinguishes between the natural roles of males and females in confronting their attachment to the world: they seek liberation from attachment in different ways.

The people of rural Thailand see women primarily as mothers, he added, an image based not only on their obvious biological functions but on the Buddhist texts and images of the time. While women could don white robes, shave their heads, and become female ascetics called mae chi, they could never be ordained as bhikkhunis, the female equivalent of the male Buddhist monks.

Twenty years later, conditions had begun to change. Slightly. A few women had gotten ordained as bhikkhunis by monks in Sri Lanka, also largely a Theravada Buddhist nation, where the feelings against the ordination of women were not as strong.

Tomalin (2006) pointed out that many proponents of the bhikkhuni ordination movement in rural Thailand were arguing, as earlier writers had noted, that there is a direct relationship between the low status of women in Thai society and their inferior roles in the Buddhist establishment. Ordaining more Thai women as bhikkhunis would not only be significant for their feelings of religious merit, it would also have the effect of giving Thai women greater power.

Tomalin noted that the mae chi do not have the option of studying Buddhist teachings, and while many live in the temples, they are assigned to cooking and cleaning for the male monks. The Thai people in general give generously to the monks—it gains them merit—but since the mae chi generate less merit according to Buddhist belief, people give less to them.

As of 2006, Tomalin noted, five women had been ordained in Thailand as bhikkhunis. Male monks were specifically banned from ordaining women under the provisions of a 1928 law and neither the general public nor the Buddhist establishment was enthusiastic about the issue of introducing female ordination. But, Tomalin felt, there was growing public approval for reforming the status of women, though many appeared to favor supporting more women in becoming mae chi rather than ordaining them as bhikkhunis.

The Thai people in general have negative attitudes toward women, which are based, in part, on their inferior status in the nation’s male Buddhist structure. Due to the gender biases of the culture, girls are socialized to be family oriented and relational rather than self-determining and autonomous as boys are. Everyday Buddhist customs and practices reinforce this structure. While boys from the poorest classes can join monasteries, where they will receive an education, this option has been denied to girls, some of whom turn to sex trafficking.

Tomalin (2006) argued that greater ordination of the bhikkhunis has the potential to rebalance this dimension of Thai Buddhism and, more broadly, the entire society. Replacing the mae chi with ordained bhikkhunis could raise the status of women, and could begin to rectify some of the problems that they face.

Nine years later, the situation continues to slowly change. A few women in Thailand are continuing to insist on becoming monks, and in the process they are challenging their country’s gendered relationships. Last week, Denis D. Gray wrote a detailed story for the Associated Press that reviews the present status of the movement and some recent developments that have captured a lot of attention in the Thai media.

He begins his report on a rural road in Nakhon Pathom province in central Thailand, where villagers are kneeling before a line of monks and filling their begging bowls with rice and other foods. This would be a normal sight for the 200,000 male Buddhist monks in Thailand, but this occasion is unusual because these are among the hundred or so bhikkhunis in the nation. Although they are acting against the strong opposition of the nation’s powerful ruling religious authority, which still opposes all ordination of women, they are gaining support from various quarters. And some of their ideas are controversial.

Gray describes the corrupt practices of the male Buddhist structure, some of which have even involved the ruling council members. After some Sri Lankan monks ordained eight more Thai bhikkhunis last November, the ruling council urged the national government to ban Sri Lankan clergy from even entering Thailand. However, their protest prompted loud criticisms of the council itself.

The Bangkok Post then editorialized that the system of clergy control over the nation had to end. “The clergy can no longer insist on operating in a closed, feudal system that violates universal norms and values,” the paper wrote. The “clergy should concentrate on cleaning up its own house to restore declining public faith.”

The AP reports that male Thai monks have been convicted of wildlife trafficking, sexual depravity, and even murder. One abbot, who is now a fugitive, has been charged with illegally amassing a fortune, fathering a child by an underage woman, money laundering, and drug use. The Venerable Dhammananda, the head of a monastery in Nakhon Pathom and the first ordained bhikkhuni in Thailand, indicated she had not seen any misbehaviors at her monastery expect for a few nuns who had used their phones too much.

The author interviewed a number of nuns. They told him that they felt it was important to maintain very high standards, so no one could make any charges against them or try to stop their movement. Juliane Schober, a scholar of Southeast Asian Buddhism, told Mr. Gray, “I think that many nuns see themselves as exemplary. They are, and they’re carving a new role for themselves that didn’t exist.”

Dhammananda tells the author that she felt like a lone crazy when she pursued her dream of entering a monastery in 2003. But as the movement she initiated has slowly grown, people no longer seem to feel it is strange to see a female monk on a street. She says that the nuns now do not have problems with ordinary people.

The 15 bhikkhunis at her Songdhammakalyani Monastery pursue spiritual ends and provide aid for the poor, help the infirm, visit prisoners, and maintain links with the surrounding community. The monastery is in the small city of Nakhon Pathom, capital of Nakhon Pathom province to the west of Bangkok. It is clear from these reports that the status of women in rural Thailand may continue to improve, albeit slowly.