The Lepchas have a myth that their ancestors tried, and almost succeeded, in building a stairway to Heaven. After the original Lepchas came down off the world’s third highest mountain, their sacred peak Kanchenjunga, and settled in the plains of Daramdin in West Sikkim, they developed the idea of building a massive tower out of ceramic blocks in order to reach the sky. 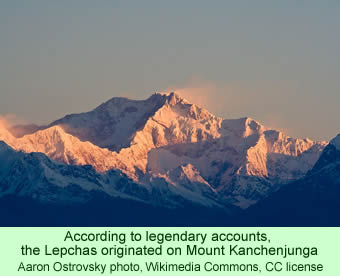 According to a news story in 2010, the legend holds that they started by forming teams of workers to supply the blocks and build the tower. When the workers at the top got quite near the sky, they sent a request back down the tower to the workers on the ground to send up a hook. They wanted to pull the sky down to them. But the request was misunderstood, and instead the workers on the ground destroyed the base of the tower, causing the entire construction to collapse. The workers who survived the catastrophe fled off in different directions, all speaking different languages—much like the Tower of Babel story in Genesis.

Many ceramic pieces have been discovered in the Daramdin area, in western Sikkim, and in recent decades promoters of tourism have advocated the construction of a Stairway to Heaven, with a reconstructed tower and a museum. In 2010, the project was finally approved, money found, and a design firm commissioned to draw up the plans.

The project creaked along for several years until January 2014, when it clearly got underway. Local Lepcha people were pleased that an important tourist site commemorating their history and culture would soon be ready in their community.

But the project, as it gained steam, has not universally been supported by the Lepcha community. A Facebook post in June this year castigated the project. It quoted one Lepcha opponent who deemed it “a failed idea” and “a disgraceful story.” The opponents argued that the money could be more effectively spent on the health and education needs of the people.

A few days later, however, the Sikkim Lepcha Association weighed in on the opposite side of the discussion, condemning the call for scrapping the Stairway to Heaven project. It said that the construction represented a dream of the Lepcha people, and it was initiated by the government of Sikkim to help them preserve their culture and traditions.

The association statement was unequivocal: “Once the project is commissioned it will not only highlight the engineering feat of the yore days of Lepchas but will turn into a study point for research which will attract scholars across the globe. Moreover the spot will turn into a tourist hub and benefit all sections of the Sikkimese society of the area.” Their statement continued that the project would not glorify any single individual, but instead would honor the entire Lepcha society.

In mid-July, a Wall Street Journal blog post weighed in on the issue and discussed the project in terms of other attempts by Sikkim, a small state in northern India, to further develop its share of the rupees spent by tourists. Evidently, some of the largest tourist developments in the state have been spiritually-themed sites—giant statues of gods, the Buddha, and such. The Stairway to Heaven apparently fits into that spiritual development scheme.

Last week a team from the Sikkim Lepcha Youth Association visited the construction site to check on the progress. A news story about their findings was not as upbeat as earlier reports had been. The construction of a traditional Lepcha house, located at the museum site, has made steady progress, but the main attraction, the reconstructed tower itself, has not gotten beyond a foundation.

The team said that the project represents the “tremendous hopes and aspiration[s] of the Lepcha community.” The group urged government departments responsible for the work to ensure that the project will progress rapidly.