The old Ladakhi men are sitting in a line on one side of the community hall arranged by descending age, with the eldest in the corner. The women bring around five gallon buckets of chang, the local beverage, bantering amiably as they fill the mugs of the men. The villagers living in Kumik, in the Zanskar region of Ladakh, sing old songs and perform traditional dances. 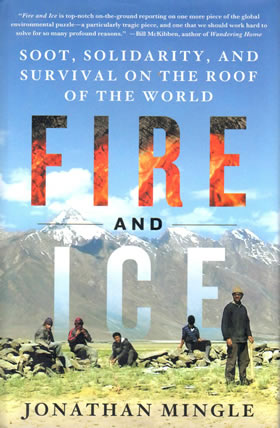 Jonathan Mingle, author of a new book on Zanskar, quotes one of the songs sung by the village women expressing pride in the community: “Kumik is like a small flower that grows high in the mountains, and only needs a little water (p.208).” The women dance around the room singing songs about a mythic heroine, Ache Lhame Dolma, a person that no one knows much about. Mingle suspects, however, that the heroine exemplifies the hard-working qualities of the village women.

The author focuses much of his book on a major, worldwide pollutant and a cause of global climate change called black carbon, better known as soot. It is formed through the incomplete burning of fuels such as wood, dried dung (in Ladakh and other parts of India), and petroleum products such as diesel oil. It evidently is a more immediate cause of climate disruption and the melting of glaciers in some parts of the world than high levels of carbon dioxide in the atmosphere.

Mingle alternates discussions about the harmful effects of black carbon with vignettes of the endearing character and enduring nature of the Zanskari people, particularly those in his study village. His basic point is to use Kumik as an example of the harm posed by black carbon, but he provides many interesting details about life in that remote Ladakhi community.

In the old days, before 1981 when a road was built into the valley, neighbors in Kumik depended on sharing the embers from their fires in case their own died during the night. They had no matches in those times. When the embers died in a woman’s house, she would send her son out with a plate to visit a neighbor and borrow an ember. The eternal flame of Prometheus was the sharing of fire with the neighbor next door.

Sharing water was, and still is, just as important. The households take turns drawing water from the water canals, a few hours each, for their fields. Their system of cooperation for the year begins in late May when they work together to plow and plant their fields. The sharing of water for their various fields is animated by a spirit comparable to the sharing of embers from a hearth. They believe that if people take more than their fair shares, their cooperative social structure will collapse.

Unlike the Ladakhi villagers in the Indus Valley 50 miles to the northeast, where each community has an elected charpon, a “lord of the water” to adjudicate disputes, the Zansakri village polices itself. When minor transgressions occur—someone deepens his channel in the dark of the night—everyone quickly hears about it, but the transgression prompts jokes instead of fights.

Open disputes are rare, and village elders quickly extinguish them. “Festering conflicts are a source of dread to Zanskaris and Ladakhis,” Mingle writes (p.100). He notes that the people put out arguments more quickly than fires. People view them as serious threats. At all times they are aware of the importance of living closely together.

However, life in the remote village of 39 homes is changing. The snowfields and glaciers which feed the stream that supplies water to Kumik are drying up. The Kumikpas, the villagers, have decided to build a new village for themselves located lower down near the Zanskar River. Mingle visits the village year after year, making friends and chronicling their slow progress in building new dwellings so the whole village can ultimately move to the better location.

Some of the traditions of the Zanskari village, such as the attempts to resolve conflicts nonviolently, persist despite the changes. At a village meeting that the author attended, called to discuss the failure of the stream, some people became tense, but peacemakers stepped forward to calm the others. Most of the people avoided a conflict by simply staring at the floor. “Their pinched expressions reminded me, once again, that Zanskaris are some of the most conflict-averse people on the planet,” Mingle writes (p.13-14).

But the ties that bind the Zanskari villagers, the informal safety nets, are fraying. One of Mingle’s friends tells him that before, if one man had a more powerful dzo, he would help his neighbor to plant his field. In return, the neighbor would help him with his harvests in the fall. But now, things are different, the friend says. “Everyone wants to finish quick. Now, not helping. Now they don’t have time. Time is money (p.113).”

Also, fewer people are engaged in agriculture and the logic of bes, the sharing system, has been undercut. For some households in Kumik, the need to contribute time to the sharing has vanished, but for others, the old ways should be preserved. Some families have numerous strong young people to help with communal projects but others don’t.

Mingle tells of a particularly searing event in the community that occurred one day when candidates from the Congress Party stop in Kumik seeking votes. Mingle attends the pitch of the politicians in the community hall. After they finish and leave, some villagers also leave but others stay to socialize. Suddenly, a few individuals explode in anger at one another—the result of too much drink and of differing party loyalties.

The rest of the people look on, stunned by the outbursts. One man, screaming with rage, picks up a wooden table as if he will crash it down on the head of his opponent. The hall is shocked and, perhaps sensing that, the man lowers his weapon. The author realizes how shocked everyone was by that sudden display of anger. “The men had edged up to the abyss and then backed away, chastened by what they had seen there,” he writes (p.352). The author admits he does not know all the facts, but he decides that something has upset the traditional balance between cooperation and competition in Kumik.

While the primary focus of the book is on the story of black carbon as a major contributor to global climate change and to human illnesses, the lengthy discussions about life in Kumik provide valuable insights into an obscure, but fascinating, corner of Ladakh.

Mingle, Jonathan. 2015. Fire and Ice: Soot, Solidarity, and Survival on the Roof of the World. New York: St. Martin’s Press