Karen Johnson-Weiner, a prominent scholar from New York State, is studying the lives of Amish women during a semester-long fellowship at Elizabethtown College in Pennsylvania. Professor Johnson-Weiner is currently a Snowden Fellow in the Young Center for Anabaptist and Pietist Studies at the college campus in Lancaster County. 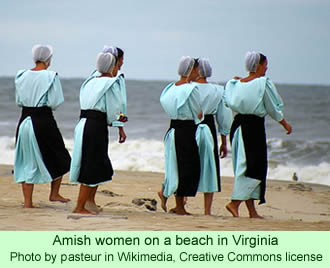 According to an article in LancasterOnline, she has studied several aspects of Amish culture. During her graduate training at McGill University, she was intrigued when she overheard a young Amish mother speaking Pennsylvania Dutch to her baby. Reflecting that her own child was about that age, she decided to focus on their language.

Johnson-Weiner, who is a Distinguished Service Professor of Linguistic Anthropology at the State University of New York, Potsdam, was fascinated by the fact that they were able to maintain fluency in their own language, which they speak in their homes, yet develop fluency in English as well. She believes that their success in developing such bilingual fluency is based on the expectations of Amish adults that their children will learn to speak both languages correctly. It is a standard that most children simply have to live up to, despite the fact that their formal schooling ceases at the eighth grade.

Subsequently, she has studied the Swartzentruber group, the most conservative of all the Amish sects. Commenting about Prof. Johnson-Weiner’s work, Don Kraybill said, “more than any other Amish scholar, she has unpacked the spiritual world of the reclusive Swartzentruber Amish—the most insular, modernity-rejecting Amish group in America.”

Because she often had her child with her when she was visiting Amish homes, she usually spent her time socializing with the Amish women rather than with the men. She found that what she read about Amish women in the standard published sources simply didn’t match up with what she was learning from the women themselves.

She found that the simple stereotypes of Amish women—that they are mostly just homemakers—didn’t capture the many different roles that they play within their communities, whether they are conservative or more liberal in their rules. The women can be artists, writers, farmers, and business owners, as well as wives and mothers.

The professor pointed out to LancasterOnline that distinctions between secular life and church life accepted by the American mainstream society are not really accurate for the Amish. Religious activities and everyday behavior are not easily separable in their culture. She is hoping that her access to the extensive archives and library at the Young Center this semester, plus the chance to get out and meet Amish women around Lancaster County, will allow her to better understand what it is like to be an Amish woman. She wants to look beyond the “stereotypes, myths and imaginative fictions” about them.