How could the Amish immediately forgive a man who had just gunned down ten of their girls in a local schoolroom, murdering five and then killing himself? Within hours after the shooting spree, the parents and relatives of the victims expressed their compassion for the killer and his family. Their attitude of forgiveness stunned millions of people who were horrified by the events, which took place at the Amish school in Nickel Mines, eastern Lancaster County, Pennsylvania, on October 2, 2006. 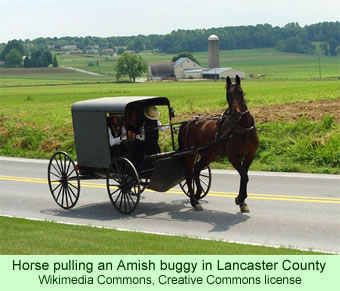 Amish beliefs in forgiveness are difficult to explain or understand, particularly in a larger society that is obsessed with retributive justice. Over a year later, in July 2008, three prominent researchers published a scholarly book that sought to explain what had happened in the aftermath of the school shooting in terms of the complexity of beliefs held by the Amish, of which forgiveness is just one aspect.

Less than a year after that, Jessica Dickey, a playwright and actress, wrote and acted as the solo performer in a play called “The Amish Project, which tried to make sense of the tragedy and the Amish beliefs displayed at Nickel Mines. The play, first presented off Broadway in New York, was favorably reviewed by numerous publications.

The play has been staged on several occasions since then, and it is currently being performed in Fresno, California. A preview of the production, starring Kristin Lyn Crase playing the seven different characters scripted by the play, appeared in the Fresno Bee last week.

The journalist writing the story, Donald Munro, quotes the Director of the project, Heather Parish, who said that the play about Amish forgiveness is “an antidote to the pervasive blame, shame, and finger-wagging we all experience in our daily lives.” It suggests, she argues, that the play emphasizes the value of compassion, grace, and forgiveness in human societies.

Ms. Parish explains that the play is based on facts. The details of the shooting of the 10 children are accurate. The place where it occurred and the international media attention are facts. The ways the Amish forgave the shooter and his family are based on real events.

However, the names and details about the various characters portrayed in the play are completely fictionalized. Ms. Dickey wanted to protect the individuals, yet convey her empathy for the Amish in ways that would not invade their privacy. The solo actress, Ms. Crase in the current production, conveys the mannerisms of the different characters in the drama, including the killer, solely through her voice and acting abilities. There are only minimal furnishings and props.

Mr. Munro asks some penetrating questions, such as whether the drama will produce lasting changes in viewers’ reactions toward the frequent mass shootings that plague the U.S., such as the recent one in Oregon. Ms. Parish responds that the play does something that other types of journalistic coverage cannot achieve: “It puts a very concrete, human face on the loss and pain of such acts.”

Parrish continues that the play makes her feel empathy for the victims as probably no other medium can do. She also says that she gained a great sense of relief for herself in the fact that humans are still able to feel a strong sense of empathy for others. It gives her hope for humanity in the face of such senseless horrors as these mass killings.

Munro then asks if she could be as forgiving as the Amish were immediately after the shooter had finished killing the kids. She admits it would be hard. But she says that she has learned through her work with the play that forgiveness takes effort. It is a process, not a quick moment of action.

Coming to terms with a senseless tragedy and then saying that one forgives is a way of announcing that one will not hold any grudges, that there is no desire to create any further harm. Vengeance is not part of an effective, peaceful response to a wrong that another has committed. Coming to that decision, she argues, is a way of letting go, of continuing with life after personal tragedy.