While Jean Briggs’ book Never in Anger successfully portrayed the Utku Inuit approaches to controlling displays of anger, her latest book may help them preserve their culture.

A news story published in Nunatsiaq Online on January 15th reported on the publication of a massive dictionary of the language spoken by the Utkuhiksalingmiut Inuit people (Briggs abbreviated them as Utku) while they lived nomadically on the land, south of Gjoa Haven along the Back River in the Central Canadian Arctic. 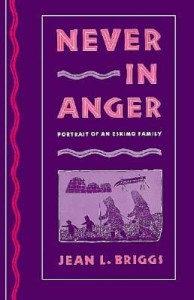 The news story provides a link to a report, in the archives of Nunatsiaq Online from 13 years ago, that included an interview with Briggs and discussed the background of her path breaking ethnography, Never in Anger. Briggs had traveled to the remote Back River of northern Canada to do field work on a group of Inuit who had not, she thought, as yet been converted to Christianity. She wanted to study shamanism as a part of their traditional beliefs. In fact, they had already adopted Christianity and the people would not admit to having any shamans.

So she spent her time in the camp, and particularly in the home of her adoptive parents, learning about the Utku ways, especially how to behave as a proper Inuk. Part of the appeal of her book is that she describes her own relationships with the Utku—misunderstandings that led to her not fitting in, and even to being ostracized for several months.

She admitted to the journalist in the 2002 interview that she herself was at fault for the difficulties she had with the Utku. “I was too volatile,” she said. “I wasn’t fun to be with.” But the point of that interview was that she was working on a dictionary of Utkuhiksalingmiut, which was finally published last October.

Briggs admitted that she doesn’t speak the Utku language fluently, though she does understand almost everything that people say to her. Not too many years after she completed her field work with the people along Back River, they resettled into permanent homes, mostly in either Gjoa Haven or in Baker Lake, and they began adopting the dialects of those communities.

The piles and piles of note cards that Briggs had made, her way of learning the language of the Utku people, formed a valuable record of the words and the English meanings of a dialect that was rapidly being forgotten in favor of the more widely spoken Inuktitut. She needed to put it all together into a published dictionary. As of 2002, she admitted that her database of Utku had more than 30,000 words, based on many repeat visits to her friends in Gjoa Haven. 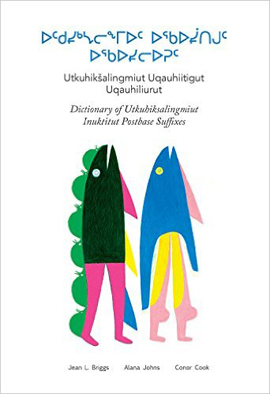 The new 700 page book, Utkuhiksalingmiut Uqauhiitigut: Dictionary of Utkuhiksalingmiut Inuktitut Postbase Suffixes, was based on her 600 hours of recordings and was published by Nunavut Arctic College. The book is available online from Amazon.ca.

It focuses on suffixes, which are heavily used in the Utku dialect to form words. Briggs co-authored the book with two linguists, Alana Johns from the University of Toronto and Conor Cook, a linguist based in Iqaluit who processed many hours of definitions. Cook told the reporter that the information provided by the Utku speakers about their language was critical. By using the notes compiled by Briggs, he could understand the precise meanings of words. The discussions by the native speakers as to exactly what the words meant provided the contexts in which the words should be used.

Cook added, “A lot of the material in this dictionary is really a testament to a strong scholarly tradition within Inuit culture of precise language use and of talking about language, and I really hope that tradition is preserved.” Since the Utku dialect has no written form, Briggs said she hoped that the book would help preserve the dialect.