Location. The Utkuhikhalik (or simply Utku) Inuit settlement of the Central Canadian Arctic and the Qipisa Inuit of Baffin Island will hereafter be referred to simply as “Inuit.” While that term, on this page, refers to just those two communities, many of the practices and beliefs of those two villages are similar to other Inuit peoples.

Economy. Though they are now integrated into the cash economy, they still try to practice their traditional hunting, trapping, fishing, and trading as much as possible. An article in 2014 discussed how economic issues contribute to Inuit feelings of happiness while another the same year explored the importance of their hunting traditions.

Beliefs that Foster Peacefulness. Contradictory, opposite beliefs are important and constructive for the Inuit: as a hunting people, killing is essential, but nonviolence is an equally essential value in maintaining society. Self-sufficiency is important for a man in order to be a good hunter, but nurturance is critical for him to be a part of the group. The Inuit clearly enjoy killing–their eyes shine with excitement when they tell hunting stories–yet they react with horror, not only to the idea of killing a human but to any form of interpersonal aggression such as shouting. They associate danger with aggression, such as the animal deaths that they witness around them, their own repressed hostilities toward others, and the realization that others might reciprocate similar feelings.

Avoiding and Resolving Conflicts. The Inuit try to prevent conflicts by being modest, cautious, and reticent about their own accomplishments. In order to avoid directly confronting others, they tend to phrase requests as non-threatening jokes. They do not make invitations or promises, and they hesitate to ask questions to avoid forcing others to give direct answers. When conflicts do arise, people often express their feelings with hints. Anger occasionally erupts, but when it does the angry person simply walks away. The community may ostracize people who develop a tendency to anger, though that would be done subtly, with the people doing the ostracizing acting more nurturing and warmer than ever. For more detailed information about this subject, see, in this website, the article “Conflict Management in a Modern Inuit Community” (Briggs, 2000). 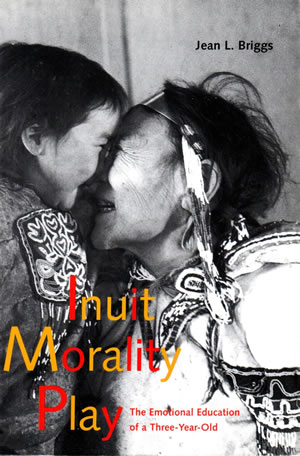 Gender Relations. They exhibit very little tension or conflict between the sexes. In the Inuit home there is a strong sense of human warmth and peacefulness—an attentiveness to the unspoken needs of family members. An important feature of Inuit marriages, when they used to live out on the land, was the clearness of the roles of husbands and wives. The men did the very dangerous and difficult hunting, while the women did the lighter physical tasks around the camp such as cooking, child care, and sewing. Both spouses generally credited the other for the essential nature of their contributions—neither could live without the hunting skills of the hunter, and the man was convinced he could not hunt without the warm clothing sewn by his wife.

Sense of Self. The non-violent traditions of the Inuit may be described by the key words they use to understand themselves and their society.

Social Control. Control of anger, or hostile emotion of any kind, is an imperative for the Inuit. Accidents, inept behavior, and failures result only in murmurs or gentle laughter—people impose strong self control on their emotions.

Strategies for Avoiding Warfare and Violence. The confusion of affection and fear that the Inuit build up in their young people appears to be an important method for insuring the peacefulness of their society. They fuse their hostility toward violence with their strong feelings about fear and affection, developed through their process of teaching their children ambivalent feelings toward both emotions. These beliefs, practices, and emotions allow them to divert aggression into non-threatening channels.

But How Much Violence Do They Really Experience? Many Inuit communities experience violence. They tell stories of murders in their past, when they used to live out on the land, and they continue to experience an alarmingly high percentage of suicides, especially among their youth. The violence in their communities is caused by numerous factors including, in part, excessive alcohol consumption. Since they moved into settled communities, many have had a difficult time developing new, and yet still peaceful, cultural patterns. The Inuit are included in this website because their strategies for fostering interpersonal gentleness and squelching anger, as described by Briggs among the Utku and Qipisa people, still appear to be worth careful study. Recent articles may help promote an understanding of contemporary Inuit culture. For instance: alcohol use is alien to Inuit society, and they are highly aware of the violence that it can cause; Inuit women and girls are vulnerable to sexual exploitation and trafficking; and the abandonment of traditional ways of life many years ago has helped cause homicides and suicides.