The ancient poetry, called ambahan, of the two Mangyan societies living near the southern end of Mindoro Island effectively conveys their daily concerns and their idealized social relationships. The Philippine Daily Inquirer last week described the peaceful social conditions, as well as the poetry, of the Buid and their neighbors, the Hanunoo.

Rita Ledesma, the journalist, briefly reviewed the history of the Mangyan peoples. Before the Spanish arrived, Mangyans lived all over Mindoro but as the invading Filipinos settled in the coastal lowlands, the seven or eight Mangyan groups retreated up into the mountains. For at least 400 years, the Buid have lived in the interior mountains near the southern end of the island. Each of the Mangyan societies, including the Buid and the Hanunoo, speak different languages, but only those two also preserve the ambahan.

Ms. Ledesma focused on the peacefulness of the two Mangyan groups. She repeated the comments of Emily Catapang, the executive director of the Mangyan Heritage Center in the city of Calapan, an institution founded to preserve and promote Mangyan cultures. According to Ms. Catapang, the Mangyans are “a peace-loving people. Family togetherness is deeply valued.” She described how elders settle conflicts and how they use leaves as symbols of the different candidates when they conduct elections. For instance, if a male candidate for office has adopted a mango leaf as his symbol, his supporters will each bring a mango leaf to the electoral assembly.

Ms. Catapang added that minor crimes were rare before modern technologies that depend on electricity, such as televisions, arrived in the villages. For instance, a film about illegal logging by Buid youngsters in 2008 entitled “Brutus” caused some controversy. But Ms. Catapang recognized that changes are occurring. Secondary schools are teaching the young people their native languages, as well as Tagalog and English, and, at least for the Buid and the Hanunoo, the Mangyan script. “Clearly there is progress, but a sweet contentment is also disappearing,” she said.

The Inquirer piece described the preservation and contemporary uses of the ambahans. They are still preserved in their ancient script on bamboo tubes, which are left outdoors to be used and read by others. The people hold ambahan sessions that often last all night or over a weekend. During these poetry readings, the Buid or Hanunoo will gather and socialize, laughing, whispering, chanting and composing almost endlessly.

The people build on each others feelings and thoughts as expressed in their poetry, without thinking much about who owns the verses. They all share the understandings of what they are saying as well as their intuitions about the meanings of the lines. Quint Delgado Fansler, a youthful idealist, described the Mangyan people to the journalist: “Culture changes. Heritage does not. The significance of Mangyan life is that it represents a living pre-Hispanic culture.”

The journalist, Ms. Ledesma, expressed her admiration for the Mangyan cultures evocatively: “Mangyans have been dancing with the winds of happiness and ease for hundreds of years.” She devoted several paragraphs in her article to the eminent scholar of ambahan studies, the Dutch anthropologist Antoon Postma, and his daughter Anya Postma, who is carrying on his scholarship related to the ancient form of poetic expression.

Anya learned from her Hanunoo mother the culture of the people, according to The Inquirer, such as spinning, weaving, designing textiles, basketry, and beadwork. She herself described her upbringing in the introductory paragraphs about her Hanunoo family in an undated paper she presented at a conference within the past few years. Antoon, a missionary priest for the Society of the Divine Word, was assigned in 1958 to work on Mindoro, where he fell in love with the Mangyan people and their culture, particularly the ambahans.

After 30 years he left the priesthood and married a Hanunoo woman. Anya was their first child. She and her siblings were raised in a home where the parents spoke only Hanunoo. “He wanted to make sure the Mangyans would accept his children as one of them, even though we don’t quite look exactly like them,” she wrote in her paper. 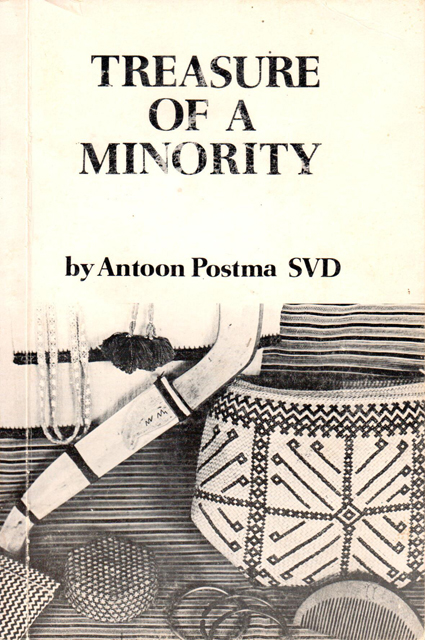 She described her father’s ambahan studies and his analysis of them, but it is better to turn to his own work to gain an insight into the nature of the poetry. His book Treasure of a Minority (1972) describes the ambahan in detail and, perhaps best of all, provides numerous examples of the poems, with English translations. While he described and translated the ambahan of the Hanunoo specifically, he made it clear that most of what he wrote would apply equally well to the Buid.

In his introductory comments, Postma defined the ambahan as a form of poetic expression that has seven syllable lines and rhyming end syllables. It is usually presented in a chanting style, though without musical accompaniment or any defined pitch. The purpose of the poem is to express allegorically the situation that the poet feels himself or herself to be in at the moment. The seven syllable rule is often accomplished by contractions or expansions of words to make the line have the proper number of syllables. Rhyming of the end syllables is essential, Postma wrote. A video on YouTube covers some of the major points Postma made in his book and reproduces a few of his translations of Hanunoo ambahans.

Postma noted that an ambahan may appear to be a nature poem about birds, trees, insects or flowers, but there are many different levels of meanings. One example he gave is that a poem about avoiding getting stung while taking honey from bees may have allegorical meanings such as the importance of watching out when you climb a mountain—or being careful when you go to the parents of a woman you love to ask for her hand in marriage.

He said that the traditional Hanunoo and Buid recitations of ambahans are of poems that have been handed down through the generations, not of recently created poems. At least, that is what the persons doing the chanting will say. Postma made it clear that the people were, in fact, creating new ambahans, but they were not admitting it. Also, different groups of people have their own groups of poetry—children, for instance, have ambahans written specifically for the interests of kids.

Postma wrote, “The ambahan is primarily a poem of social character; it finds its true existence in society (p.14).” It served practical purposes, such as the education of children, the courting of young lovers, the need of visitors for food, or the expressions of farewell by departing relatives. It helped strengthen their peacefulness.

His daughter Anya made it clear in her recent paper that those values still apply. The ambahan, she wrote, “portrays the Mangyans’ values of family, relationships, trust in nature, [and] respect for others…”