Over the past ten years, policies related to climate change in the Arctic have increasingly focused on approaches that might help the Inuit adapt to the inevitability of change. Instead, some scholars have recently argued, everyone might be better off if the traditional Inuit concepts that foster peacefulness—their firm beliefs in restoring harmony and promoting forgiveness—were acknowledged and factored into the discussions. A 2015 journal article by Emilie Cameron and two of her colleagues examined the contemporary climate change discourse in light of the beliefs of the Inuit.

The focus of the authors’ research was on the translation of key terms into Inuktitut, one of the major Inuit languages. What are the meanings of those concepts to the Inuit? How do they conceive of climate change? What are the broader historical, cultural, intellectual, and political contexts of those terms? Cameron et al. quote liberally from a glossary produced in 2005 (Terminology on Climate Change, Iqaluit, 2005) of Inuktitut terms related to climate change. The document was prepared by the government of Nunavut and the group Nunavut Tunngavik Incorporated to make sense of the differing concepts related to climate change among speakers of European languages and Inuktitut.

Cameron and her colleagues maintain that the usual translations of climate change terms into Inuktitut frame the issues solely as biophysical phenomena rather than as human-caused concepts. That framework then prompts the Inuit to respond in ways that emphasize their ability to adapt. Instead, the authors argue, a better approach would be to use terms consistent with Inuit culture, terms that value healing, relationships, and restitution. Arguing for resilience and adaptation basically seeks to place the burden of dealing with climate change on those who are affected by it rather than on those who have caused it. The authors focus their article on Inuktitut words for three key concepts: climate change, adaptation, and resilience.

The English word “climate” is usually translated into Inuktitut as sila, but the two words are quite different in scope. While the English word refers to the conditions outdoors, the Inuit term is much broader, including more than just the weather. It includes biological meanings, intellectual concepts, environmental and psychological values, and geographical terms. Sila means air and atmosphere, but it also means the universe, the earth, the spirit, wisdom, and intellect. It’s a super-concept in a sense.

Sila by its very nature is always in a state of change. In essence, the world—the whole universe—is always changing. The European concept of the earth is one of fixity, predictability, and certainty—climate change, by its very nature, represents danger. But in Inuktitut, change is part of the essence of sila. So to translate climate change into silaup asiijiqtitauninga, literally “sila being forced to change,” suggesting human intervention and causality, strikes many Inuit as absurd on the face of it. The term normally used, silaup asijjiqpallianinga, just restates the obvious—sila is of course changing.

Adaptation, sungiutivallianiq, is a fundamental value for the Inuit, a concept that defines one as a human being. Accepting change and adapting to it is one of the supreme attributes of being a person. The term suggests that one has a high character, a refined spirit, and a sense of being in tune with the earth. The essence of being an Inuk is to carefully observe the changes around oneself and to adapt to them. The root verb, sungiuti- means to be familiar with and able to deal with things and people with whom one is not familiar. The global change from mitigation to adaptation implies that the Inuit must adapt to climate change rather than the producers of the atmospheric disruptions changing their ways.

The word used for resilience, annagunnarninga, suggests very grave, life-threatening circumstances that are far more significant than just the need to be strong when conditions seem to be getting serious. In normal conversations, people use this term to signify and encourage one another in their daily struggles.  The authors are concerned about the effect on the Inuit when outsiders urge them to be resilient in the face of climate change when the term has so much stronger meanings for them. Also, since they have suffered from decades of colonial abuses, calls for them to be resilient in the face of changes seem hollow. 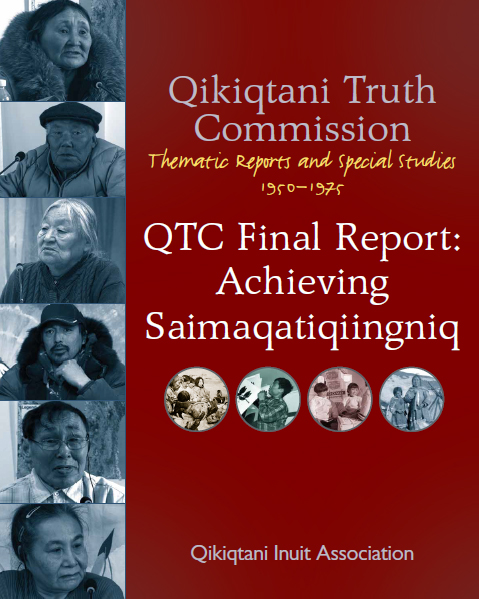 After considering concepts of climate, adaptation, and resilience, the authors discuss the importance to the Inuit of their traditional approaches to conflict resolution, reconciliation, and healing. For instance, the Qikiqtani Truth Commission, considering the devastating effects of misguided government policies that had forced the Inuit to give up living off the land, wrote that the group was established “to promote healing for those who suffered historic wrongs, and heal relations between Inuit and governments by providing an opportunity for acknowledgement and forgiveness (p.280).” The QTC clearly understood that it was not just set up to address the suffering and harm visited on the Inuit by government agencies not too many decades ago, but it was also addressing the causes of those evils and the need to restore good relations between the two peoples.

In a similar vein, justice, conflict resolution, healing and reconciliation should play a role in the Inuit understandings of climate change. When it is translated into Inuktitut with terms that imply it is only an environmental phenomenon, the people respond using those terms as well. But when it is translated as an ethical, social, and political issue, as an affront to sila, they consider it in an entirely different way.

Therefore, the authors argue, if climate change is translated as a manifestation of injustice and harm, traditional ways of healing and reconciling from conflicts and injustices would help the Inuit cope. The changes being brought about by climate change are potentially just as devastating as the injustices committed against them in the decades after World War II. Another QTC is needed to frame the Inuit responses to climate change. They are displaying a lot of resourcefulness in their responses but their resilience as a people needs to be addressed within the context of their own cultural values. “Within Inuit frameworks, healing and justice are only possible insofar as those who have caused harm acknowledge and account for their actions, and work to restore harmony,” the authors write (p.280-281).

Cameron and her co-authors conclude that the legal systems in Canada typically attempt to punish offenders; in contrast, Inuit customary law seeks to restore equilibrium, harmony and peace. Since outsiders have broken treaties, stolen lands, abused human rights, and caused wars and massacres, calls for the Inuit to be adaptable and resilient reflect a total disregard for their frameworks of justice and law. Conceiving of climate change as the Inuit would do, as an economic, political and social phenomenon, would place their responses in a larger scope than just their supposed need to be adaptable and resilient. It would validate the changes in terms that the Inuit would understand—terms that would be wise to share with humanity more broadly.