A new organization called the Amish Heritage Foundation, formed mainly by Ms. Torah Bontrager, held its first conference at Franklin & Marshall College in Lancaster, PA, three weeks ago. The conference, titled “Disrupting History: Reclaiming Our Amish Story,” focused on ex-Amish people and their reasons for leaving their communities. It was held on September 28 – 29 and a report about it by a participant was published last week by the Mennonite World Review. 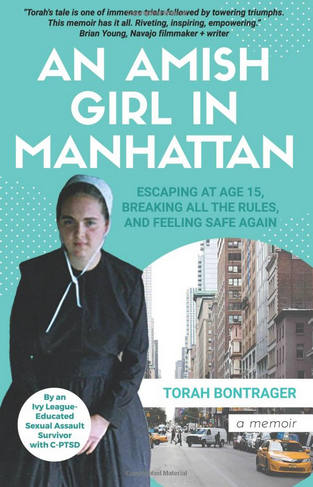 Ms. Bontrager’s story of fleeing from an abusive Michigan Amish family in the dark of the night at age 15 was apparently one of the attention-getting aspects of the conference. She tells her story in a recent autobiography, An Amish Girl in Manhattan. In her various reports, she describes being repeatedly abused and raped by members of her own family, her resentment about being denied the benefits of an education, her determination to get an Ivy League college degree, her graduation from Columbia University, and, most recently, her determination to help the Amish correct the wrongs that have grown up in their society.

According to the recent article about the conference, she is devoting herself to decrying the culture of rape that she claims exists among the Amish. She is also speaking out about what she sees as an oppressive patriarchy that is an integral aspect of traditional Amish society. She advocates for other people who have fled from Amish communities, as she did.

Ms. Bontrager and Elam Zook, the co-founder of the organization, organized the symposium to address what they see as harmful forces that are afflicting the Amish of today. One theme they chose for the event was the limited education the Amish will allow for their children, a right that they won with the 1972 U.S. Supreme Court decision Wisconsin v. Yoder, which affirmed that the Amish could exempt their children from laws that require compulsory schooling.

Many scholars have celebrated that decision as a victory for religious liberty but a speaker at the conference, Prof. Marcie Hamilton from the University of Pennsylvania, described it as permitting a type of child abuse. She decried the lack of education allowed for Amish kids as a violation of their human rights while other speakers suggested that restricting the Amish from getting the educations they need to thrive in the contemporary world violates the basic Anabaptist tradition of voluntary baptism.

Mr. Zook and Michael Billig, an anthropology professor at Franklin & Marshall, argued that scholars can be implicated in helping to foster some of problems of the Amish, especially the abuse and oppression of women. Those two pointed out that scholarship about the Amish romanticizes their lives as “idyllic, orderly and peaceful.” That scholarship has rationalized or ignored the oppressive and dysfunctional aspects of Amish society, the speakers maintained. One of the major purposes of the conference was to counter that narrative by providing a forum for people who have fled the communities.

Another facet of the conference was to provide a forum for disaffected members of other groups, such as ultra-orthodox Jewish and Muslim people, so they could tell their stories and share their experiences of fleeing oppression. The recent report mentions several of their presentations before concluding with a brief analysis of the claims of the Amish Heritage Foundation and its founders. The reporter, John D. Roth, disputes some of the arguments presented during the sessions. He questions, for instance, the foundation’s claims that the Amish are at risk of going extinct because of their resistance to change. Mr. Roth rebuts that argument by mentioning scholarship that points out they are one of the fastest growing religious bodies in the U.S.

Mr. Roth, who is the Director of the Institute for the Study of Global Anabaptism at Goshen College, continues by disputing the critique of current Amish scholarship. He argues that recent studies have shown that Amish society in general is quite dynamic, adapting well to changes in the culture and economic forces of the surrounding, larger society. He also mentions that scholars—he does not name them—have often described the differences among the various Amish groups and more recently scholars have addressed such critical issues among the Amish as sexual abuse, mental health, and internal conflicts. Roth expresses the need for more study about the proposition that the Amish are at a disadvantage when they make the choice to leave their communities.

Ms. Bontrager hopes that this conference will be the first in an annual event and Mr. Zook hopes that it will foster more conversations about the issues it has identified.