Location. Nearly 250,000 Amish live in closely knit communities that are concentrated in rural Pennsylvania, Ohio, Indiana, and surrounding areas of the United States and Canada. According to a scholarly study completed in 2012, their numbers are growing at a rate of 3.1 percent per year, far higher than the rest of the U.S., which is growing at a rate of less than 1 percent.

Economy. Their economy has traditionally consisted of farming, though many have branched out into rural businesses, such as their bed and breakfast operations in Lancaster County, PA. Amish business people interact easily with non-Amish customers and business associates, understand the competitive, market-driven, profit system, and can formulate effective strategies for managing their operations. However, they cannot grow too large because of potential criticism from within their communities that they’re abandoning traditional values. As a news story put it in 2010, they have to cope with religious issues that outsiders don’t face. However, because they like to work hard and don’t spend money on consumer goods, their non-Amish competitors tend to resent them.

Beliefs that Foster Peacefulness. The key to understanding Amish culture is the German word Gelassenheit, “submission,” a belief that includes simplicity, humility, thrift, obedience, and accepting the will of higher authorities. The Amish ideal is humility, in contrast to the modern ideal of personal fulfillment. The Amish person serves others, is guided by the will of the group, and talks, acts, and dresses modestly. Gelassenheit implies abandoning one’s will in favor of following divine will, as the Amish perceive Christ to have done. It suggests loving one’s enemies, praying for them, and never taking revenge—as Christ commanded. They adhere to Christ’s command to not resist evil, which prevents them from employing force in any human relationship. They cannot file lawsuits, a belief that puts them at a serious disadvantage when trying to sign contracts with unscrupulous businesses such as those in the fracking industry. Also, they cannot serve on a police force or a jury, hold a political office, or engage in competition. They also believe in volunteering to help those outside their own community when they feel they can be of assistance.

Avoiding and Resolving Conflict. The Amish continue to use older technologies such as the buggy that serve to define them and separate them from the dominant culture, but they are sometimes bothered by conflicts over whether or not to adopt new technologies. Any new device or convenience that some members desire is carefully examined by the entire community to see if it would foster differences between families, create tensions, or produce undue dependence on the outside world. As they consider proposals for change in the light of their historic values, they resolve the conflicts and try to preserve unity in their congregations.

Gender Relations. The Amish marry for life and form close, cooperative unions. The man is the head of the family and responsible for all the heavier farm work; the woman follows his leadership in major decisions and is responsible for child-raising, cooking, cleaning, washing, and housekeeping. Their relationship is more one of mutual respect than romantic love: they rarely express affection openly. When a spouse is irritated about something, he or she will express feelings by gesture, tone of voice, or just by being silent—perhaps for several days.

Raising Children. Children learn to respect the authority of their parents and older people. Parents teach through firmness and consistency—they may use corporal punishment, though not harshly. Children are expected to work at tasks that are within their capability, and young children of both sexes may help (or accompany) their fathers and mothers around the farm and perform useful errands. The young children are sheltered from the outside world and raised in a protective community of people who know and care for them. Traditional Amish schools try to fuse religion, morality and education as their one goal.

Social Practices. The leaders of the Amish churches, their ministers, are chosen by a process that combines nomination and lot. In some Amish communities, at the end of a communion service, men and women file past a deacon and each whispers the name of a nominee. Any man who is nominated by three or more people is included in the drawing. Each of the nominees is then handed a song book, one of which contains a slip of paper bearing a Bible verse. The man who opens his book to discover the verse is overwhelmed to realize that the Lord has chosen him for a life-long added responsibility of service to the community. While the details of the procedures may vary in different congregations, the process of having divine choice of their leaders prevents quarreling with the leadership selection process and reaffirms the unity, stability and authority of their community. 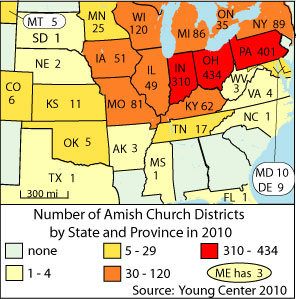 Sense of Self. If modern people are preoccupied with finding themselves, the Amish focus on losing themselves. They demonstrate proper humility in various subtle ways: an un-aggressive handshake, a thoughtful, deliberate way of speaking, a refined smile, and a gentle chuckle rather than cocky laughter. They are highly conscious of the danger of pride, the manifestation of individualism, and they try not to call attention to themselves. They are as eager to avoid taking personal credit for achievements as outsiders are eager to take credit. Their distinctive, plain clothing is designed to diminish pride, though traces of it can be seen at times in fancy harnesses on their buggies or trimmings around their homes.

Cooperation and Competition. Cooperative barn-raisings exemplify the importance of mutual assistance in their communities. The competition that exists in the Amish schools is group-centered and not individually oriented. Children will compete against their group’s previous records—to have a better spelling score than the previous month, for instance—and they thus encourage one another to perform well so that the whole class or school will do better.

Social Control. When informal social control techniques such as gossip are not effective in keeping individuals in line, more formal control measures are used. The deacon and a minister will visit the individual, and if the offense is minor and he or she is properly penitent, the matter will be dropped. If the offense was more serious and more public, the deviant may be asked to confess in front of the congregation. The most severe level of punishment involves a six-week ban, when everyone shuns the individual. If the foretaste of ostracism does not prompt the individual into correct behavior, then full excommunication will follow. The process of subordination to the group, confession, and catharsis of guilt feelings helps hold the community together.

Strategies for Avoiding Warfare and Violence. The Amish are forbidden, they believe, by Christ to become involved in any warfare or violence. They do not defend themselves if attacked, and when faced with hostile neighbors or governments they simply abandon their farms and move. Military service is an absolute contradiction to the spirit of Amish Gelassenheit.

But How Much Violence Do They Really Experience? Young people sometimes get in trouble with the law, but otherwise the Amish experience almost no violence or crime. They live in a society, according to Donald Kraybill, “where harmony, passivity, and quiet discipline are the norm rather than aggression and hostility.” An exceptional case of violence did occur in 2011 in Ohio, attacks that made headlines for months.

September 24, 2015. Positive Attitudes about the Amish in Wisconsin