A young Semai artist has produced, with the help of others, a children’s book that addresses the environmental issues faced by young Malaysians. The Star, a prominent Malaysian newspaper, featured the new book in a story on July 8. 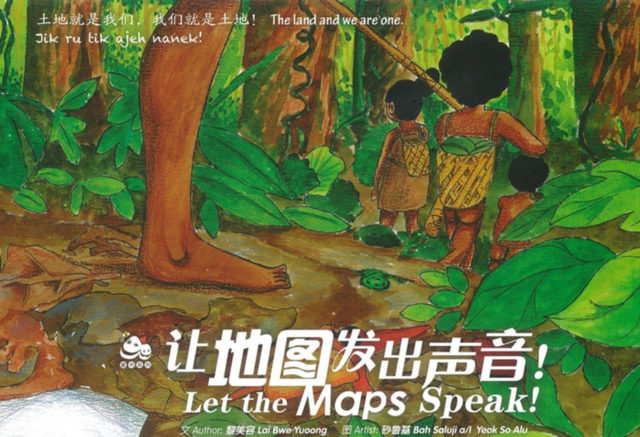 Saluji Yeok So Alu, the 26-year old artist, recently completed his second book, entitled Let the Maps Speak! (Biar Pete de Besuara! in the Semai language), which features his watercolor illustrations that offer readers glimpses into the remote village in Perak state where he comes from.

He told the newspaper that he grew up in Kampung Ulu Penderas in Perak where, he fondly remembers, he painted scenes in the village and shared them with his friends. It was a long walk to school in a nearby town, but he said he “was happy to be able to experience life in both the town and [the] forest.” The text of the book is presented in Chinese as well as English and Semai.

Let the Maps Speak is about traditional life in the Semai village and the issues that the people face today: land rights and unwanted development. They may have referred to the forest as “home” for generations but today they have little land of their own left and relatively few animals are available to hunt.

Saluji spoke eloquently to The Star: “Land encroachment, deforestation and other (development) activities have disrupted our way of life. Without the forest, there wouldn’t be us, the indigenous people. It is not only the loss of culture that is at stake here, it is also the loss of ancestral customs and livelihoods.” He based his watercolor illustrations in the book on his interpretations of real places. He says he wanted to record for future Semai children the history and culture of their communities.

Despite the challenges they face from aggressive outsiders who seek to take away their lands, the Semai villagers in Kampung Ulu Penderas are learning to respond effectively. Starting in July 2018 they began reporting to the police when outsiders encroached on their lands. In February 2019 they began to blockade contractors who were going to clear their forests.

Malaysian Care, an NGO, organized the conception, design, and production of the new book using funds it had secured through the United Nations Democracy Fund. Lai Bwe Yuoong, the supervisor and editor at Bridge Communication, which has published the book, became the author and editor of it. An official at Malaysian Care hopes that the book “will show the Orang Asli’s close ties to their land and the role they play in protecting it.”

The organizers of the production indicate that the book is designed to create an appreciation for the land rights of the Semai, as well as an awareness of their traditional knowledge and their language. It will be given free to Semai children and is available to others for RM30 from the publisher, Bridge Communication. The publisher can be reached at 40, Lorong 6E/91, Taman Shamelin Perkasa in Cheras, Kuala Lumpur (03-9286 4046). Email: rebecca.ang@malaysiancare.org.