Photoksar, sometimes spelled “Fotoksar,” a remote Ladakhi village, made the news last week for finally getting electricity from the outside world. The village of 241 people, as of the most recent census of India, is located high in the mountains about 100 rough road miles west of Leh beyond a pass that is closed in the winter.

On Sunday November 30, news sources reported that Tashi Gyalson, the Chairman and Chief Executive Councillor (CEC) of the Ladakh Autonomous Hill Development Council (LAHDC), Leh, turned on the electric power in the village. It was the first experience with electricity in the community.

In his remarks at the inauguration event, Gyalson made all the appropriate comments. He singled out Prime Minister Narendra Modi and the local member of parliament for their support. He described impending projects to electrify and install telecommunication facilities in other remote villages.

The residents, according to the reporter, were thrilled. A Ladakhi man named Chandol was pleased that their new supply of electricity would help the children do well in their schooling. “We are very happy now that we finally have electricity in our village. Now our children can study well and progress in life,” he said.

Photoksar village is remote even by Ladakhi standards. Fernanda Pirie, in her landmark 2007 book Peace and Conflict in Ladakh: The Construction of a Fragile Web of Order, indicated that remoteness from other communities and especially from governing agencies was an important part of the strategy of maintaining peacefulness in Photoksar. Basing her analysis on her fieldwork in the village, she wrote that the people avoid outside control as much as they can, even when serious crimes may have been committed.

For instance, in another village a boy disappeared during a hike with older boys into nearby mountains. When his body was found, the villagers couldn’t ascertain exactly what had happened. But rather than call the police, the parents of the boys who presumably were responsible for the death agreed to pay the parents of the victim a very large fine in order to settle the matter and prevent a lingering dispute.

The people talked about taking the matter to the police but they did everything possible to avoid that. Pirie observed that local conflict resolutions of issues, with ceremonial apologies and restoration of harmonious relations, help them define their village as an autonomous community, their ideal. 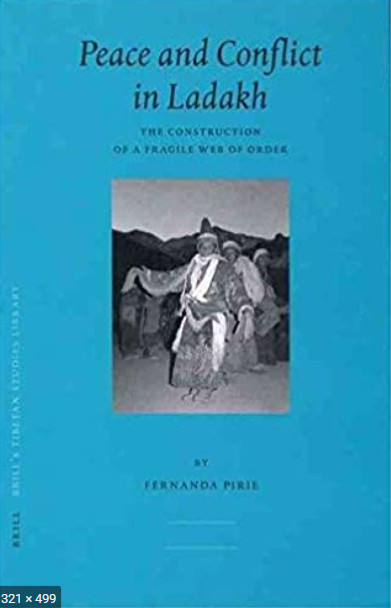 Pirie added to her analysis that the villagers idealize a peaceful community, one free of anger and conflict. Conflict, they feel, is a manifestation of a society that is degenerate—yet they recognize that their own village is far from ideal. When she suggested that the village did not seem to have much conflict, one of Pirie’s informants quickly disagreed. “Oh no, we have a lot of arguments, which is very bad … We drink too much chang,” he told her (p.126).

But the people’s attitudes toward violence, their insistence on order in the community, is based on their fundamental ideal of a harmonious, united, and peaceful village. They believe that order is an individual responsibility, not a divine condition or an idea based on laws. Peacefulness is established by individuals acting voluntarily, not something that is imposed from above, they are convinced.

It is not clear from the news last week if, in their pleasure about finally becoming connected to the electric grid, the residents of Photoksar are considering the implications of additional ties to the rest of Ladakh that the development might imply.