Location. A communal Christian Anabaptist society of more than 50,000 people that flourishes primarily in the upper Great Plains of the United States and in the neighboring Prairie Provinces of Canada. They should not be confused with the Bruderhof communes, also known as the Society of Brothers or, sometimes, Hutterites, who are well-known for manufacturing classroom furniture, wooden toys, and other products.

Economy. Hutterites live on large, mechanized communal farms that are formed as clones of established colonies. In the larger, mature colonies, most men over 30 hold lifetime appointments to all the major positions, but there are a number of younger men with no chance for upward mobility. Competitive feelings can develop that foster social problems. The solution is to divide the colony. They buy land for the new colony, develop the new infrastructure, divide into two equal groups, and choose by lot which group stays and which moves. An article in 2015 explained how changes and innovations in their business enterprises are very important at one colony in Alberta. For more information, see articles about fish farming in Montana and resentment by some Canadian businesses against Hutterite enterprises.

Beliefs that Foster Peacefulness. The Hutterite worldview is based on respect for the authority of God. God has established a hierarchy of relationships, with the lower always obeying the higher—the younger person obeys the older, the woman the man, and man obeys God. They feel that the individual will must be broken—people should accept self-denial rather than self-fulfillment. But individuals are never secure before God—only their daily behavior gives them security, not their baptism or verbal affirmations. Since the will of God is expressed through the decisions of the community, the individual must be obedient to group will. Communal living is God’s order, and private possessions express man’s greed.

Avoiding and Resolving Conflict. Because of the communal structure of their society, it is essential for Hutterites to deal effectively with interpersonal tensions. Simple disagreements or misunderstandings are settled between individuals—people will simply speak directly to others. If that approach fails, the preachers or other church members will intervene. In serious situations, people may be summoned before the church membership and given a chance to ask forgiveness. If that does not succeed, they may be temporarily ostracized, banned from membership until they repent. They eat alone and may not shake hands with others. If they leave the colony, they are condemned to eternal damnation, so the colonies normally do not force their members out. 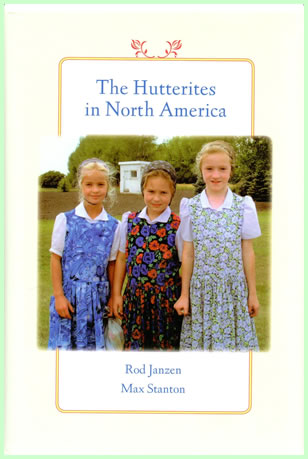 Gender Relations. Hutterite men and women operate in two separate subcultures in the colony. People believe that women are clearly inferior—man was created in God’s image, but woman was taken from man and inherits his submissiveness and weakness. The men make all of the colony decisions and the women generally support the patriarchal order, though on the informal level they have a considerable influence on colony affairs. In practical terms, women are confined mostly to gardening and domestic chores, they do not drive colony vehicles, and unlike men they are quite closed off from the consumer society.

Raising Children. Hutterite children enter kindergarten about age three, where they learn to pray, obey, and get along with others. They also learn to be quiet around adults and to cry quietly. When they reach school age, they attend the colony’s German language school, where they study the Bible, learn Hutterite beliefs, and learn to read and write in German. They also attend the English school, where an outside teacher teaches all the subjects of the public school curriculum, including reading and writing in English. The children thus learn to associate their own customs and beliefs with the German language of the colony and the ways of the outside world with the English language. An article in 2010 analyzes changing strategies for disciplining children in the Hutterite colonies and another more recent one describes schooling at a South Dakota colony.

Social Practices. When projects are proposed or group work is underway, Hutterites are highly respectful of each other. Older men whose pace of work may slow down the operation are respected; when young, inexperienced boys join in the work they are not resented. In group discussions, everyone is highly conscious of rank and quite cautious about advancing proposals; suggestions will be made passively, many proposals considered, and since ideas are not attributed to specific individuals, the group as a whole becomes the author of the proposal that is decided upon. Everyone shares in the decision-making and identifies with the result.

Cooperation and Competition. Competition between individuals may exist in a muted form, and the managers of different farming operations of the colony may compete for resources. The colony executives have to override this competitiveness and make decisions for the good of the whole colony. But in general, as individuals age they progress from hard labor jobs to management positions to offices of executive authority. Competition thus does not occur for positions in the well-integrated colony. Furthermore, Hutterites have been socialized to not assert themselves for personal advantage, so they do not feel comfortable seeking positions of dominance. Instead, they wait until God chooses them for advancement. Also, since influence, authority, and power are diffused, the mature men generally cooperate in group actions.

Social Control. The Hutterites have an accepting rather than a sullen attitude toward the pressing need for discipline, though they also cherish their individuality, an essential psychic need for the health of the colony. But there is an emotional cost to their style of socialization: depression, anxiety, and alcoholism are problems in many colonies. Human relations in the colonies sometimes lack warmth and spontaneity—people may tend to suppress emotions, avoid intimacy, and keep silent in order to maintain their nonviolence. Their regular release from suppression and avoidance consists of interruptions in routines, such as family outings and singing festivals.

Strategies for Avoiding Warfare and Violence. Hutterites are particularly sensitive to the resentment and anxiety that their farming neighbors and the people of the nearest towns may feel toward them, and they make efforts to overcome those feelings.

Sometimes they will help neighbors or exchange or sell farm produce with the primary aim of improving neighborly relations.

Likewise, the colony often purchases goods in the local towns rather than a larger, more distant, city so that people in their area realize the economic importance of their presence. Hutterites assist neighbors with disaster relief in Alberta and give food generously to the poor in Saskatchewan.

But How Much Violence Do They Really Experience? They have moved repeatedly during their history from one country to another to avoid violence or the threat of military conscription. They are firm pacifists and refuse to serve in the military. According to John Hostetler (1983), “there has never been a homicide” in Hutterite history.