Location. Nearly 2,700 Malapandaram, also called Hill Pandaram, Malappandaram, Malampandarom, and Malaipandaram (the latter term used by the 2001 census of India) live primarily in settled colonies in the forested mountains near the temple complex to Lord Ayyappa at Sabarimala, a major pilgrimage destination in the state of Kerala, southern India.

Economy. Nomadic gathering and hunting in the forest have traditionally provided the basis of their economy, which is supplemented by trading forest products with the farming villagers in the plains, for whom they also, occasionally, do wage labor. The 2001 Census of India indirectly confirmed that economy: 55 percent of the Malapandaram are listed as “nonworkers.” One of the ways they earn money is by selling medicinal herbs and roots to pilgrims heading for Sabarimala. A 2012 documentary film portrayed the lifestyle of the Malapandaram.

Beliefs that Foster Peacefulness. The Malapandaram strongly believe in the equality of the sexes, individual autonomy, frequent separation and formation of new groups, the absence of social groupings above the family level, and the lack of territoriality. Their nonviolence and timidity are the result, primarily, of the bullying and harassment they get from the farming people in the plains.

Avoiding and Resolving Conflict. They frequently display their lack of aggressiveness by separating and fleeing from conflicts. They do not have formal means of resolving disputes, though individuals do act as mediators informally. Individuals will interfere in quarrels to try to calm tense situations, and if the parties can’t be calmed, they separate.

Gender Relations. Women are treated equally to men, in marked contrast to the Hindu peoples of the lowlands. While Malapandaram women gather vegetable foods, haul water, find firewood, and do the cooking, men normally do the hunting and harvesting of wild honey. The divisions are not rigid, however: men may help gather firewood and assist with cooking meat, while women may help hunt small animals. The simplicity of their gathering and hunting economy fosters individual self-sufficiency and economic independence, so social relationships tend to be based on positive feelings rather than economic dependence. Marriage for the Malapandaram is an extremely loose monogamous convention: they do not emphasize long-term, binding relationships. Spouses often exhibit quite warm feelings toward one another—but when the warmth cools, the relationship ends. Recently, however, Malapandaram women in some communities are reporting that they live in fear of sexual harassment, both by outsiders and by their own men. 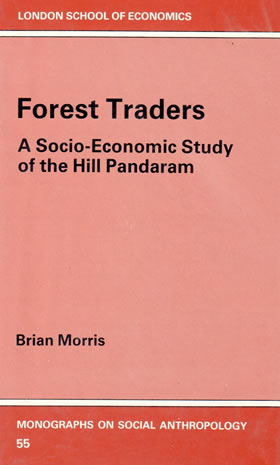 Raising Children. Infants are held and carried about constantly by their mothers, who nurse them on demand. Children have the freedom to explore without restraint and to handle sharp tools such as axes and billhooks. When children in the two to four age bracket cry, they are quickly soothed, and if the mother is too busy to respond then other adults or children will. However, by the time they are five or six years old, children have been socialized into patterns of individual autonomy, they have lost their emotional ties with their parents (though they may continue to show some affection), and they often live with adults other than their own parents. Adults only limit children’s autonomy by controlling their expressions of aggression against other children or adults.

Sense of Self. The Malapandaram are very timid, nonviolent, and retiring in their relationships with outsiders. The agents of forest contractors frequently patrol their territories and attempt to cajole, sometimes coerce, and, at times, physically assault the Malapandaram to force them to gather more forest products for them. The forest dwellers have thus learned their shyness and timidity as a response to those practices, and they still tend to hide from the agents when they are about.

Cooperation and Competition. The Malapandaram used to move about together in small bands consisting of one to six families, though to judge by news accounts in recent years, most appear to have now settled into what the Indian media often call “colonies.” Whether nomadic or settled, individuals from different families may cooperate in the daily foraging for food and trade goods, or they may forage alone. Meat, tobacco, and honey gathered from collective expeditions are shared generally, but otherwise people eat or trade what they gather.

Strategies for Avoiding Warfare and Violence.The Malapandaram are normally treated with contempt and derision by the plains people, who deplore their forest economy, food production methods, and nomadic lifestyle. As a result, the Malapandaram avoid their neighboring peoples since they are often not sure how to correctly interact with them. Some Malapandaram live fairly near the plains people and are able to interact well, particularly the ones who provide services to the Sabarimala pilgrims, but others, who live entirely in the forests, try to avoid all contacts with outsiders. The ones that do interact with their Tamil or Malayalam neighboring communities completely change their manners, hair, and dress before venturing into the outside world. As they leave the forest they will change clothing, the women often affecting attitudes of servility in the presence of outsiders.

But How Much Violence Do They Really Experience? It is not completely clear from the writings of anthropologist Brian Morris how much aggression he may have witnessed among the Malapandaram or what their rates of violence really are, but he does emphasize (1992 p.100) that their social structure “puts a premium on the avoidance of aggression and conflict” and they “tend to avoid conflict by separation and flight.” However, a news story in 2013 reported extensive sexual violence against Malapandaram women living in one settlement in Kerala.

July 23, 2015. Kerala and its Peaceful Societies Part 2, the Malapandaram

April 16, 2015. Resettlement Plans for the Malapandaram