Location. Before the Aswan High Dam was finished in the early 1960s in southern Egypt, about 50,000 people lived in Old Nubia, along both sides of the Nile River south of Aswan. After the completion of the dam, the Egyptian government moved the affected Nubian people to new communities near Kom Ombo, New Nubia, north of the dam. There are also some long-standing Nubian villages downstream from the dam. Many Nubians live in the major cities of northern Egypt, as well as in the Sudan south of the border. Nubian activists today estimate that their population in Egypt is about 300,000. The focus of this encyclopedia entry will be on the Nubians of Egypt since their peacefulness was well described by Fernea (1973) and others.

Economy. In order to irrigate the fields and farm the land above the Nile in Old Nubia, the people built large water wheels to haul water up from the river. These water wheels were relatively complex and expensive to build, so the Nubian families built them cooperatively and shared the water resources they provided. The shared maintenance and operation of these devices, combined with the fact that they could only provide so much water per day, helped discourage subdivisions of the shares of water and of the farm fields they watered. The economic facts brought about by the water wheel technology prompted the Nubians to maintain a social system of cooperative partnerships based on stable, more or less equitable, divisions of land. This helped minimize disparities in wealth. Today, many hold wage jobs, the same as other Egyptians, though many also long to return to a rural life in communities near the river, or what used to be the river, Lake Nasser. Some landless Nubians are so desperate for land to farm that they are even invading bottomland nature reserves along the Nile.

Beliefs that Foster Peacefulness. Nubians themselves take considerable pride in their peaceful society, or what they think of as one. They think of their society as balad el aman, a land of peacefulness and security. One of their beliefs that helps build their peacefulness is that they do not blame their misfortunes on malevolent individuals, such as witches, so they are able to avoid that source of rancor. Instead, they feel that some people happen to have an evil eye, and those individuals with the evil eye inadvertently cause problems for others through accidental glances. Disputes are thus avoided by not personalizing or blaming others for disasters and problems.

Avoiding and Resolving Conflict. The Nubians place a high value on resolving village disputes right within the community. When minor disputes arise, such as a fight between two unrelated children that brings the mothers and their kin out onto the street to support their own, neutral bystanders will normally rush in to end the conflict. When more serious conflicts threaten, third parties who may be respected by both parties to a dispute will intervene. Serious conflicts are discussed after the Friday prayers in the mosque by the men of the congregation. Networks of reciprocal relationships that bind people to others outside their own families also help militate against factional conflicts. The resolution of a conflict among some Nubians in April 2013 showed that traditional means of settling disputes may not be as effective as they used to be, but the people still try to avoid serious violence. 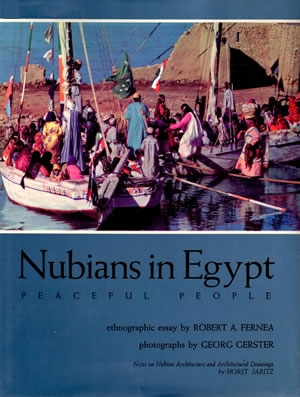 Gender Relations.In the traditional Nubian village, men depended on women for their maintenance of the family and the home, while women depended on men for money and support. The nearly equal status of men and women was bolstered by the fact that women often had their own sources of earnings. This helped women achieve nearly the same power as men. However, Dongola, a prominent Nubian novel by Idris Ali, suggests that the racism and violence that the Arab Egyptians perpetrate against the Nubian people parallels the gender violence in Nubian society. In new Nubia, while men and women are still seen to be nearly equal, men do have more access to wage labor in the Aswan area than women have, so the balance of equality may shift in time and women may become marginalized. Traditional marriage customs seem to persist in Nubian communities, although practices and rituals vary among the different resettlement communities.

Raising Children. Babies are loved and cared for by everyone, and as they grow they are socialized and instructed by the entire village. Traditionally, girls were only educated in the home, but increasingly, in New Nubia, parents are encouraging their daughters as well as their sons to attend and excel in school. However, girls are raised to do housework, and while boys have chores around the house—and farming chores if the family has farmland—they tend to be waited on by the females of the family.

Social Practices. After the Nubian people were resettled by the Egyptian government north of the Aswan Dam in 1963, the sudden availability of modern conveniences such as pumped water and transportation gave them more leisure time. This created opportunities for expanding their social interactions and unifying their new communities. However, social problems such as drinking and gambling also increased. Family relationships and ceremonial patterns changed after the move because communities were arranged very differently in New Nubia. The compactness of the new communities compared to Old Nubia, and the presence of transportation, allows people to attend ceremonies more easily, which has prompted the Nubians to modify the social aspects of their traditional ceremonies to fit the new circumstances.

Cooperation and Competition. Nubians are careful about entering into new reciprocal relationships since they would then be obligated to repay them. Many farming relationships therefore exist only on a cash basis. In spite of this, everyone has a network of ties: people respond to others with assistance when needed because of illness, because a job is too large for one person, or due to other circumstances. All of these connections are reciprocal. Other acts of kindness, and gifts for the elderly, fall within the purview of traditional Muslim charity.

Social Control. Nubians don’t reveal serious problems to outsiders, particularly to authorities such as the Egyptian police, since their best chance for survival as a village is to be ignored by the authorities. A safety valve that has released tensions has been the fact that many men could go off to a big city, usually Cairo, to work and find release for their energies, free of the traditional, conservative restrictions of the village environment.

But How Much Violence Do They Really Experience? Robert Fernea, who spent time studying Nubian society in the 1960s, before the people were resettled to New Nubia, feels their beliefs in the peacefulness of their society were not exaggerated. “The villages we lived in and visited seem to lack any form of violence,” he wrote more recently (2004, p.105). He has re-visited his Nubian friends in New Nubia several times over the years since the Aswan High Dam was completed, and he feels that the Nubians are still a “peaceful people,” though their social conditions are much different now than they were 40 years earlier. However, a protest demonstration by Nubians for their rights in September 2011 in Aswan turned violent, and in April 2014 serious violence broke out between rival Nubian and Arab clans in the same city.