Location. This entry is based primarily on Herbert Phillips’ remarkable book Thai Peasant Personality (1965), which described the conditions of peaceful life in his study site, the village of Bang Chan, then in rural Thailand 25 km northeast of Bangkok but now an industrial suburb within the metropolis.

Economy. The primary economic activity of the Rural Thai farmers at the time of the Phillips study was rice cultivation, though they also fished, grew numerous other crops, and kept farm animals. More recent accounts of rural Thailand indicate that in many locations, rural people also now hold jobs in nearby towns and cities. A 2014 study found that while many Rural Thai adults take jobs in cities, most retain their ties to their villages, which provides the security and culture they value. A study published in 2011 found that while family farms are a resilient feature of Thailand, non-farming jobs are transforming the rural villages.

Beliefs that Foster Peacefulness. The Buddhist Thai villagers view the universe as uncertain and unpredictable. They do not have clear expectations of others and are highly tolerant of nonconformity. Their loosely-structured relationships are due to this world view, and the undifferentiated (relatively simple) social situations in their peasant villages permit them to function effectively. An important attitude of the rural Thai is one of respect for others. This respect is based not only on their relative social positions and proper performance of social roles, but also on a basic respect for the dignity of others as human beings.

Avoiding and Resolving Conflict. The Thai villagers have a major social precept: always try to avoid face-to-face conflict. They have very little tolerance for discord. They maintain a constant good humor, affability, friendliness, conviviality, and gentleness with one another. One scholar recently concluded that many of them often feel quite happy. They like to keep their relationships jocular, relaxed, pleasant and fun but devoid of social significance. They hesitate to embarrass or to break bad news to another person. Nervous giggling and constant discussions of inoffensive or inconsequential topics mark their conversations, as they strive to find out what the other person is thinking. While these characteristics are not unique to the Rural Thai villagers, these people emphasize them with an almost ritualized, stylized mode of behavior that is correct, genial, and friendly, but lacking in personal involvement or commitment.

Gender Relations. Most marriages today are monogamous, though polygny was a part of Thai culture in the past. There used to be very little overt gender discrimination in their work: rural women fished and plowed the fields, men helped with housework and cared for babies. However, the Thai society has been, and remains, biased in favor of men, based in large part on their interpretation of Buddhist doctrines and practices that have prohibited the ordination of women as monks. 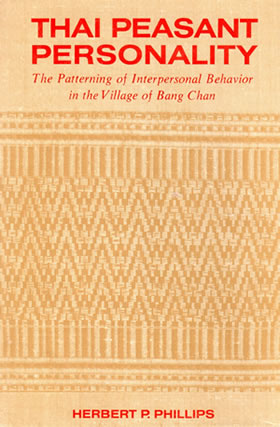 Raising Children. The rural Thai raise children to accept their positions in the hierarchical authority structure of the family and the society. They also teach them to respect the dignity of all other people, even the essential dignity of a baby. They try to inculcate good habits in children by example and by coaxing—though very occasionally they may threaten physical punishment, which is rare and more the result of sudden anger than premeditation. Children do not appear to fight. If parents or older siblings are not able to persuade children, they will simply give up and admit that children have the right to decide what they want to do. One must respect the will of even the smallest child. Many Thai children are being raised by their grandparents in rural areas while their parents work in cities, which is causing adjustment problems and increasing levels of aggression.

Social Practices. Interpersonal aggressiveness is rare among the Thai villagers because people are extremely careful not to provoke others. In addition, since others will not respond to a show of anger, there is little incentive for people to display their aggressive feelings. The Thai maintain a strong inner control combined with a fatalism and passivity reflecting their belief that they can’t do much to correct situations.

Sense of Self. The Thai villagers have a strong respect for authority. Their language and social structure require them to address others as social superiors or as social subordinates. Even when authority figures are wrong in what they do, the villagers show respect toward them. They generally do not have any fear of other people, though some people feel anxiety about the actions of others.

Cooperation and Competition. The Thai people tend to value their affectionate family relationships in terms of the gifts and services that they receive from others. Thus, a man might particularly remember his grandparents because of all the things they had given him. They also show their love within their families with the generosity and warmth that occurs during the planting, cultivating, and harvesting of rice. Particularly during the rice harvest, family members cooperate closely in the daily work, when all can appreciate and feel the mutual dependency of their labors. During the cooperative harvest period, people tend to feel very good: they will laugh more loudly, tolerate kindly the antics of their children, and express joy, optimism and well-being.

Social Control. The high degree of politeness that the Thai villagers show toward one another at all times has both positive and negative aspects. It contributes to their toleration of deviant behavior, nonconformity, and failures by some people to not abide by the social standards. The shortcomings of villagers who have serious faults are their own business and should not be ridiculed–they are accepted for what they are. On the negative side, however, the requirement for total politeness tends to dampen spontaneity and genuineness. Politeness enhances positive qualities at the same time it hides them.

Strategies for Avoiding Warfare and Violence. The Thai villagers have very little tolerance for discord: while most families are quite placid, when disputes do occur, the people have a tendency to flee from them. They fear volatile arguments and will leave their families for a while if faced with a possible disagreement.

But How Much Violence Do They Really Experience? In Bang Chan when Phillips was there, the Rural Thai villagers walked away from people at the slightest possibility of trouble, though they could express aggressiveness in covert ways, such as through gossip or supposedly inadvertent slips of the tongue. But they had little toleration for direct, face-to-face aggression. Magic and witchcraft appeared to be very minor and little-used forms of aggressiveness. Jonathan Rigg’s study in 2008 in Ayutthaya, a formerly rural community just 75 km. to the north of Bangkok, describes how that area has been affected by a major industrial development, much as Bang Chan has been not far away. That work discuss the changes that the huge industrial complex brought into the formerly rural area. The community now includes dormitory complexes with many migrant workers from other areas of Thailand. People lock their doors and crime rates have soared. Furthermore, a 2014 journal article described the increasing acceptance of aggressiveness in Rural Thailand and a rise in violence in Thai high schools.