If another Edward Steichen were to announce a 21st century “Family of Man” exhibition, Lye Tuck-Po could submit some of her pictures of the Batek for possible inclusion. The famous book Family of Man, published in 1955 as a result of the exhibition, includes human-interest photos that are supremely absorbing for the insights they give us about the things that people do, the ways we think, the emotions we exhibit, the relationships we foster.

Dr. Lye has a similar eye for human interest shots as those photographers from more than half a century ago. She has been putting some of her photos of the Batek on Flickr over the past couple of months, most recently on August 13, and she has been drawing appreciative comments from her viewers. Many of her pictures capture the same sorts of moods that the Steichen book did—people doing, people loving, people interacting. 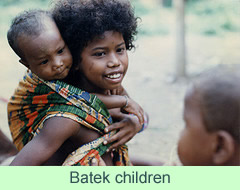 At this point Lye has only put 14 pictures of the Batek on her Flickr page, though she also displays numerous other shots she has taken in Malaysia and Cambodia, many of which are also quite interesting. The visitor to this website might want to ignore the slideshow approach and view the pictures individually in order study them carefully, consider the author’s notes, and read the comments and criticisms by others.

Several of the pictures are really striking, such as the fourth in the series, a shot of a girl holding her baby brother on her back (reproduced here in reduced size, with permission). Fortunately, Dr. Lye provides additional information about each of her pictures. The photo of the girl with her baby brother was taken ten years ago. Lye tells us that the girl, named Kesok, is now a young mother herself and Awek, the baby, was nine in 2004, the last time she saw him.

The fifth photo in the exhibition is a shot of a little girl with clips in her hair, put there by the older children crowded around her. Anyone who has watched children fuss with a smaller child will enjoy this scene. One senses that the numerous positive comments to this picture are from photographers who appreciate the challenge of getting a good group photo of children looking quite natural in their play.

Another outstanding picture of children shows three boys who had been sitting sedately on a log, a bit wary of the approaching photographer who was crouching to compose her picture. Just at that point, Lye tells us, someone cracked a loud fart. She took the picture as the three reacted to the universal humor.

The very first photo in the group, called “Living in a Lean-to,” shows young parents sitting next to a lean-to they have just built, obviously resting from their work. Behind them, on the bare floor of the new lean-to, their two young children are jumping with glee. The older one is caught by the photographer in mid-leap.

Some of the photos have prompted many comments. For instance, the second picture in the exhibit shows a broad gravel road with the forest framing the outer edges of the scene and a scattering of people speckled along the dusty expanse. It was used on the cover of her book about the Batek, Changing Pathways: Forest Degradation and the Batek of Pahang, Malaysia. Visitors’ comments about this picture, and about most of the others, focus on photographic qualities—not surprising for a website devoted to photography. “Beautiful shot! Somehow moody and introspective …” one person writes. “Luv the dusty mood …” says another. Dr. Lye responds to the comments with respect and appreciation—this is a fun site to browse in.

The eighth picture in the group, a shot of a couple children climbing high in a tree, received several critical comments that the children are hard to spot—which, indeed, they are. Small human figures next to the tree with branches splaying upwards from the trunk, it is not immediately clear from the picture what the kids are doing. But Lye tells us they are using slingshots to shoot at birds.

Her response to the criticism—that the kids are hard to spot—is most instructive. “In real life [the Batek] have a (sometimes disconcerting) way of blending into their environment, and moving quietly through the forest so you do sometimes have to ‘squint’ your eyes to find someone.” She is quietly pointing out that the photo captures the reality of forest life. Her 14th picture, an evocative shot of a rainforest camp, makes a similar point. The picture shows how the camp is closely integrated with the forest, a point that she emphasizes in her book. The Batek people are part of the forest, not dominant over it.

Many of her pictures capture the Batek doing things. For instance, the third shows a group resting next to a river while they are moving their camp. Her ninth photo shows a man handing some pieces of game meat he has bagged to his three-year old daughter to share with other members of the camp. The 10th captures a group of women and girls processing a mildly poisonous plant that they use to stun fish. Her 13th photo shows some men loading rattan onto a truck to be taken to market.

These photos by Dr. Lye should help foster understanding of the Batek people and, more broadly, of the other Orang Asli societies of Malaysia, much as her scholarly writing does.

As an added note, Dr Lye indicates she has a limited number of copies in PDF of her recent journal article about the Batek in the Asia Pacific Journal of Anthropology, which was reviewed here on March 16. She can send it via e-mail to people who are interested. Contact her by going to her main Flickr page, click on “Profile,” then go to “Send Flickrmail.”