Lye Tuck-Po revived her blog two weeks ago with an adorable—and that’s the only appropriate word—picture of three Batek children taken in a forest during her most recent visit. All three kids appear to be under seven. A little boy on the right has a determined look on his face as he chops away with a small machete, while a girl next to him is sucking on a ginger root and a third child kneels on the ground, glancing curiously back at the other two. 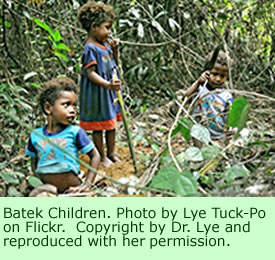 Dr. Lye, a Malaysian anthropologist, published a blog until August 2009 that included a lot of her ethnographic research notes about the Batek. But she shut it down due to the pressures of other work. She has just decided to start it again, though this time she plans to focus mostly on her photos.

Titled “Anthropological Notebook: Reflections & Photography from Travels & Fieldwork,” the first entry in the new blog is dated May 21. She indicates in the blog that she has returned many times to visit her Batek friends over the years since she did her field work in 1995, most recently in February 2010. Her observations about the Batek are interesting, and her photos, as they have been in the past, are fascinating.

She comments, about her opening photo, that the children were just as curious about her as she was about them. She writes that she sang songs to them she had learned from others in their community during earlier visits. It was an effective ice-breaker.

She describes her other photos of the Batek, which she posted daily last week. One is of a man who hosts tourists visiting the Taman Negara National Park, near which they live. Another shows a man making blowpipes to sell to park visitors. Still another shows five men waiting their turns to guide visitors to the top of Gunong Tahan, the highest mountain in the park and in Peninsular Malaysia.

She writes that some of the Batek now have cell phones at their forest homes, so it is much easier for her to maintain regular voice communication with them. A tall photo she posted on May 25 shows some people walking along a forest pathway, dwarfed by the towering trees. She has a way of communicating information with her photos so that further explanation is unnecessary.

On Wednesday last week, she posted a photo of a young mother with a wistful look, holding her baby on her hip. Below it, she showed another of the same person, taken in 1995 when she a girl of about nine. At that time, Dr. Lye’s photo caught the girl launching objects at birds from near the top of a tall tree.

A photo on Thursday showed two older men, twin brothers, and she posted below it a group picture from 1995 that included the same two men in the background. She points out that one of the men appeared to be in failing health. When she approached him and sat down, the man did not look directly at her most of the time.

She asked him if he remembered her and he acknowledged that he did. The anthropologist recalls that she, too, had a hard time looking directly at him. They sat back to back looking out into the forest while they talked about old times. They glanced at one another only once when they shared a joke. She explains that that it a characteristic Batek way of avoiding the display of emotions.

She discusses the Batek habit of frequently building new houses—to allow for family expansion, to allow people to move farther away from others they have grown to dislike, and for other such reasons. She includes a photo of someone thatching a new roof. That gave her the idea of taking photos of pathways into and through communities. She has continued posting photos and detailed explanations this week.

Dr. Lye may have intended to confine her new blog mostly to photos, but she nonetheless has already included some substantial information about the Batek in the pictures and text she has posted.